Like many members, I have always attended the association’s brown bag seminars and Bench Bar, but for years I didn’t do too much more with the IndyBar.

I remember exactly when it became more than just seminars for me. When Judge Gary Miller was president of the IndyBar, I was serving alongside him as a state court judge. I was frustrated with recruiting pro bono counsel, so I went to talk to him. It wasn’t hard to find attorneys who would say yes when I called to ask if they’d represent an indigent party, but it’s awkward because you know they “can’t say no to a judge.” Plus, I’d tapped out all of my friends. So in 2003, I went to Gary to see if the IndyBar could help me out.

You know how this one ends. Gary agreed it was a problem and suggested I chair the Pro Bono Standing Committee and do something about it. Dave Campbell had chaired the committee for the first few years of its existence, and he was ready to pass the baton. Not too much later, Gary Klotz became president of the bar and told me over lunch that pro bono was one of his areas of emphasis for his term and that he hoped I’d continue as chair.

It’s hard to say no to either Gary and so began my involvement with the IndyBar. Probably every committee chair position is fun and rewarding but the two “feel good” committees, in my opinion, are the Pro Bono Standing Committee and the Bar Leader Series Steering Committee. I chaired the Pro Bono Standing Committee for a couple of years and then served on the committee for a couple more years. I brought the beer for Legal Line every month during my last year on the committee. Not a tough job.

When my husband Mike became president of the bar, I said the one thing I wanted to do was to chair Bar Leader Series and, of course, he let me do that. Smart guy. I recruited my very good friend, Brian Welch, to put together the lunch speakers. Brian seems to know everyone in Indianapolis and he came up with a fantastic roster of speakers. The service projects organized by the series participants were amazing. I loved every minute of planning and participating in BLS that year, plus I made some great friends.

When I became president of the bar, Mike made the same ask of me. He led BLS this year and every month he came home raving about the program and the community service opportunities, which included Judge Bob Altice cleaning windows at Outreach (pictured).

John and Martha Hoover have been presenters for BLS for many years and John is going to chair it next year. Applications for participation in BLS are now available at IndyBar.org/barleaderseries. You must be a lawyer with three to 10 years of experience to apply. It’s a wonderful way to learn more about the IndyBar and about our city. 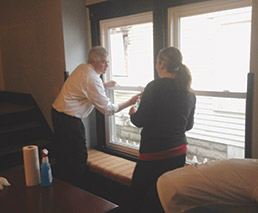 Once you get involved in the IndyBar, it’s hard to let go, and there are countless ways to do so. Nissa Riccafort, our President-Elect, has appointed Jeff Abrams as chair of the nominating committee for the 2017 Board of Directors. The applications are online now. If you are interested in serving on the board, you should self-nominate. Most people self-nominate so don’t hesitate. If you know someone you think would be a great addition to our Board, think about nominating them too. There are a lot of applicants and if there isn’t a spot on the Board, we always try to find a fun volunteer position for anyone who is interested. You’ll be glad you did!

And don’t worry, Judge Altice is the only one who has had to wash windows!•