After establishing three committees to tackle the persistent problem of unrepresented litigants trying to maneuver their way through the state’s judicial system, the Indiana Supreme Court has decided to start over.

The Supreme Court issued an order May 17 that dissolved the Pro Bono Commission, the Indiana Commission to Expand Access to Civil Legal Services and the Indiana Supreme Court Committee on Unrepresented Litigants. In their place is the new Coalition for Court Access which, much like the prior committees, is charged with improving access to civil legal services for low-income Hoosiers.

Justice Steven David, chair of the 17-member coalition, said the work his group will be undertaking is both a challenge and an opportunity. The goal is to improve delivery of civil legal services whether through legal aid organizations, lawyers offering assistance for free or at a reduced rate, or providing answers online.

The coalition will hold its first meeting in August and begin setting its agenda. As a single committee examining the issue, David said the coalition will be able to do strategic planning, set long-term objectives and bring together representatives from the different sectors of the legal community as well as legal nonprofits so they can learn what each is doing and reduce duplication.

“We all want the same thing — better access for those who can’t afford (an attorney),” he said.

Central to the coalition’s work will be the collection of data. What will be measured has still to be decided, but David said the group will work to ensure all courts are collecting the same information so as to demonstrate the value of the different efforts and programs.

The coalition wants to be able to point to data to show what is working well, David said.

Meanwhile, unrepresented litigants continue to appear in Indiana courtrooms. Nearly 91,000 civil cases filed in 2014 had at least one pro se party, according to the 2014 Indiana Judicial Service Report. More than half were domestic relations cases.

The problem, Indiana State Bar Association President Carol Adinamis pointed out, is never going to go away. But likely a combination of services and approaches, rather than a single solution, will get help to more unrepresented civil plaintiffs and defendants.

Identifying those potential remedies to the pro se headache will be easier with one entity than with three, supporters said.

The idea for consolidating the existing civil legal services committees came from the Assessment Team appointed by the Supreme Court in mid-2015. Led by Adinamis, the 10-member team examined the three-committee structure and made a recommendation that one group would be better.

To the Assessment Team, Adinamis said, establishing a single committee made a lot of sense. One entity will be able to see the whole picture and, with members from different organizations, be able to focus more on the problem than before.

He explained the three committees were doing similar things and while they tried to communicate and collaborate, they realized the structure needed to be rethought. Now the bureaucracy that can hamper things getting done has been removed. Dunlap sees the work and goals of the coalition as being much the same as what came before, but gone will be the red tape.

“From my position, I think it is a positive change,” he said

Few on the new coalition are fresh faces. Many of the initial members are either active in the civil legal service community or served on one of the three previous committees. Dunlap is hopeful the coalition will become more diverse, drawing individuals not just from various areas of the legal community but also from outside the profession.

Bringing in non-lawyers will enable the attorneys and judges to look beyond the judicial impact of pro se litigants and see the larger issues involved, he said. To underscore this point, the six members appointed by the president of the Indiana Bar Foundation include Andy Fraizer, executive director of the Indiana Association for Community Economy Development, who is not an attorney. 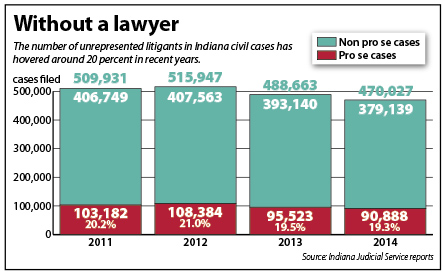 Also having a seat at the coalition table are attorneys and leaders from Indiana’s legal aid organizations. John Floreancig, general counsel for Indianapolis Legal Aid Society and coalition member, applauded the inclusion, saying the legal service providers can offer valuable insight on the work being done “in the trenches.”

Addressing the problem of unrepresented individuals, he said, will take putting more money into the system to pay lawyers to give assistance. The solution will not come from pro bono service alone.

Floreancig said the coalition now has a golden opportunity to help solicit additional funds. It can educate the Indiana General Assembly, private foundations and granting organizations about the plight of pro se litigants and some of the ways to assist.

As a former Boone County judge, David had unrepresented litigants appear before him and he remains sympathetic to the trial court judges who continue to see pro se parties. Many on the bench struggle with determining how much help and guidance to provide to the person who has no legal counsel.

In addition to the burden on judges, the problem of too little resources to help with legal problems is forcing some litigants to make a choice, Adinamis said. Because they cannot afford an attorney, an individual might opt to not fight for child custody, file for divorce or protect themselves.

Conceding the aspirational goal of enabling every litigant to get an attorney regardless of ability to pay is not possible, Dunlap said a more achievable objective would be creating a system offering different levels of legal assistance. The amount of legal service provided would be gauged to the need so everyone could have “meaningful access” to the courts.

Some civil legal issues might be handled by providing the litigant some basic help filling out a form while other issues are more complex and require the help of an attorney, he explained.

As the coalition commences work, it will be required to make recommendations and provide an annual report to the Indiana Supreme Court. David emphasized the court is not setting the agenda but rather “empowering the right people with the right resources to greatly improve the delivery of civil legal services.”•