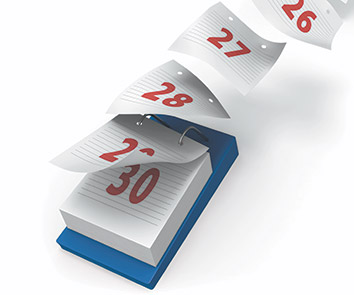 Lawyers who practice before Indiana’s Tax Court see big problems as the median time for cases to be decided increased from about one year to almost 2.6 years since 2011.

By a 7-1 margin, those who responded to a survey on the court disagreed or strongly disagreed with the statement, “After taking the merits of cases under advisement, the Tax Court decides them in a timely manner without unnecessary delay.” The survey results are contained in a task force study of the court conducted by the National Center for State Courts, which was provided to the Indiana Supreme Court in April.

The study examined performance of the court for the period of 2011-2014 compared with 2006-2010. Despite the fact Tax Court Judge Martha Blood Wentworth was appointed in 2011, Court of Appeals Judge James Kirsch, who chaired the task force, said the study isn’t a review of her performance.

“It really wasn’t intended to be, and it really is the operation of the court and not the function of the judge in the court,” Kirsch said. “We can probably debate given that it’s a one-judge court whether there’s a difference between those, but I see there as being a difference. I see whoever succeeds Judge Wentworth, and whenever, needs the same mechanisms in place for case management that need to be put in place now.”

Chief Justice Loretta Rush also said the study wasn’t a review of Wentworth’s performance. She said justices knew there were some issues with growing delays in the court, and that’s why funding was authorized for the study.

Senior Judge Brent Dickson will chair an advisory committee that the task force recommended to improve the Tax Court’s performance. Rush said the Supreme Court soon will issue an order establishing the committee.

“That’s too long for someone to wait,” Rush said of the 947 days the report found was the median time from case filing to decision for Tax Court cases from 2011 to 2014. Rush said members of the court had met with Wentworth who was “in full support of the recommendations.”

Wentworth said the court has already developed an action plan and put in place many of the report’s recommendations to improve efficiency. She noted that in 2015 — a period after that examined in the study — the number of opinions issued was among the highest on record. 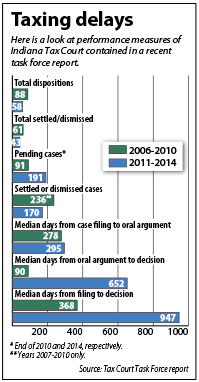 “Criticism is tough for everybody, and when you’re a judge you need to have a thick skin,” Wentworth said. “I love this court and I love this law, and my goal is to be as efficient as we can be, and I welcome the help.”

The NCSC surveyed stakeholders regarding the court’s resources, caseload, performance and operations. “A majority of respondents from all practitioner types and levels of experience believe that the Tax Court does not decide matters promptly and without unnecessary delay,” the report says. “Respondents also believe that the Tax Court does not clearly communicate the process and timeline for disposition of cases nor does it explain any delays.”

While the study found fault with the court, it concluded the rationales for creating the venue in the 1980s remain. Task force member Dustin Huddleston of Franklin, who represents Johnson County government entities before the court, said one of those considerations was eliminating forum shopping. The study found that the desire for a single court with expertise developing a uniform body of tax law also remained valid.

“It is a unique entity,” Huddleston said. “It does its own research and stands on its own. It’s not tied into the Court of Appeals.”

Kirsch said the uniqueness of Tax Court and the fact it “works alone” prompted the recommendation to create a committee that could advise the court on administration, case management, performance standards and data collection. “That uniqueness has created some of the problems,” he said.

“There is a backlog right now and that needs to be resolved, so setting up a benchmark that cannot be attained in the next three months really doesn’t do much,” Kirsch said. “One of the things I learned a long time ago about time management is that the key in managing time isn’t managing how long an event takes, it’s managing the time between events where nothing’s happening, and as I look at the Tax Court, that’s a big reason for the delay in decision making.”

For example, the study found:

• The median period of time between oral argument/trial and the decision exploded from 90 days before 2011 to more than 650 days from 2011-2014. While the two aren’t entirely comparable, Kirsch noted the Court of Appeals typically hands down opinions about 60 days after arguments or completion of briefing.

• Clerks get cases assigned late in the process. “The length of time from the date of trial/oral argument until a law clerk or staff attorney begins to review the case has, in recent years, taken from 12 to 18 months,” the study said. The court when fully staffed operates with one staff attorney and three law clerks.

But Kirsch said another uniqueness of the court is its lack of performance benchmarks, and Wentworth agreed. “Lots of the ugly numbers are due to the inherent differences” in tax law and other civil law, Wentworth said. Tax cases also can be impacted by supplemental audits and related cases, and so benchmarks for the court will have to be different. “That’s what the advisory committee will now help us develop,” she said.

Kirsch said the Tax Court has prided itself on unlimited oral arguments in every case, even arguments on motions. It’s also rendered detailed written orders on motions — practices that may need to be forgone to improve the court’s efficiency. “It is wonderful if you can do it and do everything else in a timely fashion, but at some point you’ve got to say, ‘the best use of my time is here.’”

By a more than 3-1 margin, survey respondents said some appeals in the court could be taken under advisement without oral argument and hearing.

Kirsch agreed the court already has implemented some report recommendations that are making a difference, and the task force chose to concentrate on efficiencies rather than arguing for increased staffing.

In addition to establishing the advisory committee, the task force recommendations included:

• Resolving some routine cases without a hearing;

• Assigning law clerks to cases at the outset; and

“I don’t think this just happened overnight. It was sort of gradual,” Rush said of the increasing delays. “Having a Tax Court, having that body of law is important. It’s important cases be timely processed through the court, and the Supreme Court is committed to working with the Tax Court.”•