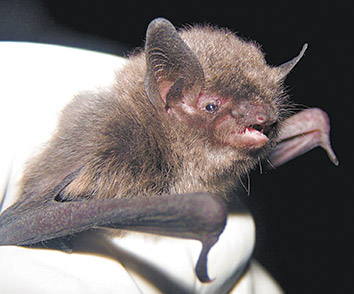 The survival of the Indiana bat has been in such doubt that it was one of the first animals to be listed as “in danger of extinction” under the Endangered Species Preservation Act of 1966.

Its population has declined as amateur spelunkers have overrun the caves it hibernates in, logging has claimed the trees it roosts in during the summer, and pesticides have exterminated its food supply of insects. Now the tiny mammal is facing another threat from, ironically, something that is supposed to help heal the environment — green energy.

The Indiana bat has been part of a long-running battle against a proposed 100-turbine wind farm in Champaign County, Ohio. A lawsuit filed in 2013 by the Bloomington-based Conservation Law Center sought to block a permit issued by the U.S. Fish and Wildlife Service that would have allowed the Buckeye Wind Project to kill — or “take” in environmental parlance — the protected species.

On Aug. 5, the D.C. Circuit Court of Appeals offered a mixed ruling in Union Neighbors United, Inc. v. Sally Jewell, in her official capacity as Secretary of the United States Department of the Interior, et al., 15-5147. While it found the issuance of the permit was “arbitrary and capricious” because the federal agency did not analyze a sufficient number of alternatives to reduce the number of Indiana bats taken, it deferred to the agency’s interpretation of the Endangered Species Act.

Attorneys disagree over the implication of the ruling but acknowledge this case presents another example that the use of renewable energy has consequences. Indiana bats, along with other kinds of bats and birds, fly into the blades of wind turbines, and they lose their habitat when acres are cleared to make way for solar farms.

Chair of the environmental and land use practice group at Nossaman LLP, attorney Paul Weiland represented Buckeye Wind LLC as an intervener in this lawsuit.

He said green energy enables the country to reduce carbon emissions and mitigate climate change while still generating enough electricity to support daily living. Legal disputes like this one will not stop the use of wind energy altogether, but they do create a challenge to the proposed farms.

At the Conservation Law Center, attorneys W. William Weeks, Jeffrey Hyman and Peter Murrey emphasized they support responible development of renewable energy, but “you have to obey the law,” Weeks said, “Just because you’re talking about renewable energy, you don’t get a free pass on the law.”

The Conservation Law Center noticed the Buckeye Wind farm, a proposal of wind-energy company EverPower, when the Fish and Wildlife Service opened the then-pending incidental take permit to public comment. This permit utilizes an exception to the Endangered Species Act to enable lawful projects to kill endangered animals.

The center’s concerns about the permit were echoed in the lawsuit it filed in the U.S. District Court for the District of Columbia. The complaint asserted the federal agency did not analyze how requiring the turbines to turn only in faster winds, or what is called the cut-in speed, would impact the Indiana bats. Hyman described this as “unlawful conduct.”

On behalf of Union Neighbors United, an organization of local residents opposed to the wind farm, the center sued to vacate the taking permit and force the Fish and Wildlife Service to consider higher cut-in speeds.

UNU member Julie Johnson is grateful the center took this issue pro bono. She and her neighbors have been fighting the installation of the turbines for a decade, worried the wind farm would decrease their property values, harm the environment and destroy their bucolic way of life.

“Most people I know don’t want to live in the middle of a wind farm,” Johnson said.

As part of the taking permit process, the Fish and Wildlife Service considered three alternatives for protecting Indiana bats. The most protective measure required the turbines to stop turning from dusk to dawn when the bats would be most active. But this was deemed economically unfeasible. In the end, the agency approved the minimally restricted alternative that allowed cut-in speeds between 5 meters-per-second (11.2 mph) and 6 mps (13.4 mph).

Union Neighbors proposed raising the cut-in speeds to 6.5 mps (14.5 mph). The federal agency dismissed that suggestion, noting while higher cut-in speeds could lower bat mortality, there were an infinite number of combinations of cut-in speeds that could be considered but the alternatives it examined were sufficient.

The D.C. Circuit agreed with Union Neighbors that the service failed to meet its obligations under the National Environmental Policy Act Procedures by not considering additional alternatives. It found the agency did not have to consider an “infinite array” of alternatives or even review the 6.5 mps suggestion, but the agency has to analyze a mid-range alternative that would take fewer bats while still enabling the wind farm to go forward.

Both the Fish and Wildlife Service and the U.S. Department of Justice, which is representing the Department of the Interior, declined to comment.

Weeks said the court’s reversal on the NEPA claim is a wake-up call to federal agencies. The judiciary seems to be worrying that the government is not taking a hard enough look at the environmental consequences of certain projects.

“The court is breathing new life into NEPA,” Weeks said.

Weiland said the ruling affirms the Fish and Wildlife Service complied with the Endangered Species Act.

An amendment to the Act allows for the killing of threatened animals as long as the proposed project “will, to the maximum extent practicable, minimize and mitigatethe impacts of such taking.” Here, the circuit court held the welfare of the entire species, rather than the individual animals, should be considered. Weiland sees this ruling as giving the Fish and Wildlife Service flexibility and confirming the agency’s interpretation of the ESA has been correct.

Hyman disputed the appellate court actually affirmed the ESA portion. The circuit panel concluded it was expressing no opinion as to whether the Fish and Wildlife Service has obligations under the Act when considering alternatives as required by NEPA.

For the Indiana bat, the ruling might be negligible. Joy O’Keefe, director of the Center for Bat Research, Outreach and Conservation at Indiana State University, said compared to other dangers, wind turbines pose little threat to bats. Typically, these mammals do not fly high enough to get caught in the swirling blades.

Still, she pointed out, the small Indiana bat population is being attacked by the deadly fungal disease white nose syndrome, and they have likely been harmed by pollution from coal-fired power plants. So wind farms can be concerning.

“Everything becomes more important,” O’Keefe said of the threats to the Indiana bat, “because we can’t afford to lose them.”•