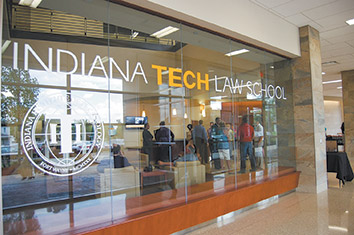 Indiana Tech Law School, the state’s fifth law school that has struggled to gain legitimacy and respect since it opened in 2013, suffered another setback when only one graduate passed the state bar exam given in July.

The first class of students who graduated in May felt they had to be successful in passing the bar and finding jobs as attorneys in order to counter the questions and doubts about the new law school. However, the July results were particularly disappointing with 11 of the 12 test takers failing.

Since the bar results were announced Sept. 12, the law has not made any public statements. Dean Charles Cercone did not return multiple phone calls seeking comment. President Arthur Snyder, who touts the establishment of the law school as one of his noteworthy accomplishments, also was not available for an interview. Members of the board of trustees did not respond to phone messages.

Indiana Tech spokesman Brian Engelhart was reluctant to release too many details, citing confidentiality and ethical considerations. He did confirm that 12 of the 20 graduates sat for the Indiana exam and only one passed.

Engelhart said the school has been talking to students about the exam and their options going forward, including the possibility of retaking the bar exam in February 2017. Faculty are working to assist the graduates.

Jon Olinger, a top graduate and former Fort Wayne Community Schools board member, told the Fort Wayne News-Sentinel that the number of Indiana Tech students taking and passing the bar may be misleading.

“I’m stunned, but of the top three students, only one took (and passed) the test,” he told the paper. He said he did not take the test, nor did a lot of middle-ranked students.

“I’m not without fault,” Olinger said, adding that he hopes to take the exam in 2017. “But we were prepared well (by the school).”

Allen County Bar Association immediate past president R. David Boyer II said the results were surprising and disappointing, but the bench and bar were still supportive of the law school.

“We remain cautiously optimistic but you just never know,” Boyer said. “The bar and the community want to hang in and support the school as much as we can.” Still, he noted they will be looking for better results next time.

While Indiana Tech Law School’s performance on the bar exam was abysmal, the overall 61 percent passage rate for all bar exam test takers was the lowest in 14 years for a July test, according to available statistics on bar passage. The drop in July passage comes after the February results, which were a historically low 55 percent, also declined compared to previous years.

Initially, the passage rate for the February 2016 bar was 51 percent, but through the appeals process the overall pass rate rose to 55 percent. Test takers must score at least 264 points to pass the exam but those who earn a combined score between 255 and 263 can appeal to have their exam regraded.

Engelhart said a number of Indiana Tech graduates are within the appeal range, but didn’t specify how many.

The Indiana Board of Law Examiners declined to release the number of people who have appealed the July 2016 bar exam or previous bar exams and the number of successful appeals, citing Admission and Discipline Rule 19 on confidentiality.

In August 2015, the Indiana Supreme Court issued an order that allowed Indiana Tech law students to apply for the bar exam. The court requires that all test takers graduate from ABA-accredited law schools, but because Indiana Tech would likely not receive provisional accreditation by the application deadline, the court made an exception for the students.

The Supreme Court said it was not authorized to disclose the number of students who applied to take the bar from each law school under Admission and Discipline Rule 19.

This is not the first time the Fort Wayne school has stumbled.

In June 2015, the American Bar Association rejected Indiana Tech’s bid for provisional accreditation. The law school opted not appeal the decision but instead focused on developing its course offerings and bolstering the academic support it provided to students.

The law school recovered and was granted provisional accreditation in March 2016. In addition, an article in the April 2016 edition of the Wisconsin Law Review singled out Indiana Tech as having “perhaps one of the best models for skills integration throughout the curriculum.”

The law school has long championed its hands-on approach to legal education. Faculty touted the curriculum as emphasizing legal writing and providing the students with real-world experience that gave them the skills they would need to practice law.

Still, the college has been criticized for opening a law school at a time when the legal profession was in upheaval as jobs were declining and student debt was climbing. The inaugural class had a median GPA of 2.85 and a median LSAT score of 148, numbers that indicate the students were at risk for not passing the bar.

Boyer said the Fort Wayne legal community does not have enough insight into what happened to speculate on the cause of the low passage rate. There are too many moving parts to cast blame on any one aspect, he said.

He noted the school has overcome troubles in the past. He is hopeful the 2016 bar exam results will prove to be an outlier.

“It can be good,” Boyer said of the law school. “It has good potential for the community. You don’t want to write off that potential.”•