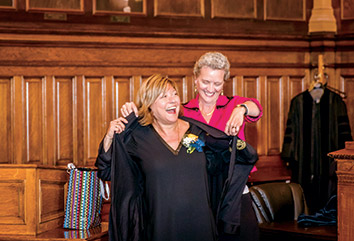 A look back at the state of the Indiana judiciary 40 years ago reveals a very different world: The Supreme Court was composed entirely of men, there was no uniform system for assigning case numbers, and technology had not yet revolutionized courts’ day-to-day operations.

That was the world Lilia Judson found herself in when she entered the Indiana judicial system as executive secretary for the Judicial Study Commission, the Judicial Nominating Commission, the Commission on Judicial Qualifications and the Judicial Conference in 1976. But in the four decades since, Judson has had a hand in dozens of initiatives that have helped the court progress to its current state, which includes the first female Supreme Court chief justice and the transition to a newly branded Office of Judicial Administration.

Judson said working in the American legal system was a rewarding career, one that she could never have imagined as a young girl living in Bulgaria.

“I did not dream of becoming a court administrator,” Judson said at a retirement ceremony in her honor on Oct. 12. “But this job has been the most challenging, rewarding, exciting career that any lawyer could ever wish.”

As a student at Indiana University Robert H. McKinney School of Law in the 1970s, Judson began working with the Judicial Study Commission halfway through her law school career and soon discovered that her skills were better suited to the managerial and business work within the judiciary than to the work of a practicing attorney.

When the Indiana General Assembly created the Division of State Court Administration in 1977, Judson transferred into the new department first as assistant director, then as director and finally as executive director in 1997. While she was overseeing the Division of State Court Administration, Judson said she generally took on a new project every year to improve the function of the state court system. One of her earliest projects was the transition to a uniform case numbering system in the 1970s, a change that was a far cry from the decentralized system that had allowed individual trial courts to track their cases using their own systems.

As the state judiciary set about the task of teaching its numerous trial courts to number their cases in the same manner and collect data on the number of cases handled each year, Judson was there to facilitate the process. When committees met to set new standards for records creation and maintenance, Judson’s role was to help turn those recommendations into reality and, in general, make sure the new numbering system was correctly and effectively implemented.

Looking back over her career, she remembers that particular project as one of the hardest she ever undertook.

“It was a slow process,” Judson said.

In the 1980s, Indiana courts started appointing more women to committees and leadership positions, Judson said, opening up a new era of more diverse personalities and opinions on the court.

And Judson has a unique distinction among judicial employees. She has worked with 17 Indiana Supreme Court justices during her 40-year career, the largest number of justices any Indiana judicial employee has ever worked for.

Although it was often challenging to work for a variety of personalities, Judson said each of the justices who have sat on the bench during her career have been smart, capable people, which made her job easier.

But the former court administrator conceded that every justice had his or her unique idiosyncrasies. For example, some were incredibly detail-oriented, while others wanted only the facts related to the case directly in front of them.

When she was faced with the challenge of maneuvering through the different needs of each of the justices, Judson said she often reminded herself that the five members of the bench are the ones who take all the criticism and praise for the work of the judiciary. Thus, it was her job to carry out their decisions the way they wanted.

Additionally, Judson said she had a genuine respect for each justice she worked under. They were all well-qualified and dedicated hard workers, a trait she admired.

Judson expected hard work and excellence from those who worked for her, Dolan said, and she set the example for her employees by showing extreme dedication to her work as executive director.

To honor the atmosphere she created in the Division of State Court Administration, Judson’s coworkers dedicated a special issue of the Indiana Court Times to her life and career and presented the commemorative issue to her at the retirement ceremony last month.

“Lilly’s emphasis on equality, fairness and transparency made my job much easier,” Dolan said in the special issue of the Indiana Court Times. “I will use Lilly’s public service career as inspiration for what can be achieved with persistence and a positive attitude.”

The idea for the creation of a chief administrative officer to replace Judson arose a few years ago out of a need for succession planning across the judiciary, Judson said. When she and other longtime court employees retired, judicial leaders realized the need to have a plan in place to support a smooth transition within the court system after the institutional knowledge of Judson and others was lost.

That, coupled with the fact that much of the efforts of the court were still decentralized and divided into too many departments, led Judson and her co-workers to begin looking for a way to create a more centralized system. After receiving federal funds to support Judson’s final project, the state court system was able to transition to the Office of Judicial Administration, which will enable the judiciary to run more efficiently in the future, with Willis taking the reins of many of the court’s functions.

At Judson’s retirement ceremony, Indiana Chief Justice Loretta Rush told the former court administrator that the work she had done for the court and the judiciary had improved the work of justices and judges across the state, and her efforts toward ensuring a smooth transition after her retirement would benefit the courts for years to come.

“You were a huge part of my judicial journey,” Rush said.

Looking to the future of the state courts, Judson said there are some areas where she sees a need for improvement, such as the availability of court interpreters or funding for state courts.

But with the new chief administrative officer in place, Judson said she is confident the judiciary will continue to function efficiently and effectively, even without her 40 years of experience.•