William Harvey, dean emeritus of Indiana University Robert H. McKinney and nominee to the 7th Circuit Court of Appeals died Nov. 17 after a long illness. He was 84. 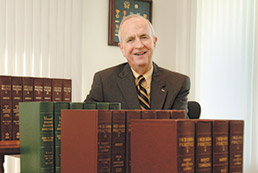 William Harvey was a professor and dean at IU McKinney from 1968 until retiring in 1996. (IL file photo)


He joined the faculty at IU McKinney in 1968 and served as dean from 1973 to 1979 before retiring in 1996. In 1997, the school established the William F. Harvey Endowed Scholarship for law students who demonstrate academic achievement and financial need.

Harvey authored 25 volumes on Indiana Civil Procedure and Evidence and more than 400 columns in the Journal of the Indiana State Bar Association. He also published in the Wall Street Journal, the National Review, and the Journal of the American Medical Association as well as several law review journals.

“He was widely recognized as a leader in our legal community and a devoted mentor to his students,” said IU McKinney Dean Andrew Klein. “I know that he had a great love for our law school which he served for so many years. A five-time recipient of the school’s Black Cane Award for Outstanding Teaching, he was held in high esteem by generations of McKinney Law students. I know that he will be greatly missed by his former colleagues and students alike.”

As a professor, Harvey taught many of Indiana’s political leaders including former Vice President Dan Quayle and his wife Marilyn, Sen. Dan Coats and Gov. and Vice President-elect Mike Pence.

In a statement, Pence described Harvey as a “champion of the Constitution, a mentor, a veteran and a man of faith.”

“Professor Bill Harvey was a personal mentor of mine and an intellectual giant who throughout his distinguished career garnered the respect and admiration of his peers, colleagues and students,” Pence said. “His awards and recognitions were numerous and his body of work will serve as a guide for those studying the law for generations to come.”

Speaking to the Indiana Lawyer in 2007, Harvey enjoyed his students and was always willing to help them.

“I always said to my students, ‘If you ever have a problem any time in your career, I’ll be available.’ I said that and I meant that,” Harvey said.

President Ronald Reagan appointed Harvey to the National Board of the Legal Services Corp., one of six recess appointments. The incident set off a fight between the Reagan appointees and the board members appointed by President Jimmy Carter, including former Secretary of State Hillary Rodham Clinton. A lawsuit to oust the Reagan board members was unsuccessful but the president ultimately withdrew all the appointments after the Senate refused to confirm Harvey and two others to the board.

Although Reagan was a strong critic civil legal aid, Harvey was a champion of providing such help to the poor, said John Floreancig, general counsel of the Indianapolis Legal Aid Society. Harvey served for many years on the ILAS board of directors and in 2006 was honored by the nonprofit with the Lifetime Achievement Award.

Floreancig was 15 years old working in a golf shop when he first met Harvey. The two developed a friendship which continued through Floreancig’s studies at IU McKinney and then when he took the helm of ILAS.

“He was instrumental in getting me this job. He believed this 31-year-old kid could be general counsel,” Floreancig continued. “He was really kind to me.”

In 1985, Reagan nominated Harvey for the 7th Circuit Court of Appeals. However he was never confirmed by the Senate.

Born in Missouri, Harvey received a J.D. degree from Georgetown University Law School. He served in the U.S. Navy, being honorably discharged as a lieutenant in 1967.Before he entered academia, Harvey worked for Judges Warren Burger and John Danaher on the U.S. court of Appeals for the District of Columbia Circuit.

A memorial service is planned for January 2017. Funeral arrangements are pending.