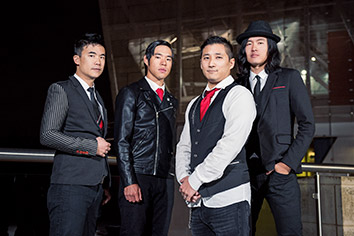 (Note to readers: This story contains terms that readers may find offensive.)

Any rock band worth its volume is anti-establishment.

However, a Chinatown dance rock ensemble is kicking up the volume by actively fighting the status quo and, as a result, could topple a key section of a 70-year-old trademark registration statute and possibly the entire U.S. trademark system.

Bass guitarist Simon Tam filed a lawsuit against the U.S. Patent and Trademark Office after the federal agency denied his application to trademark the name of his band, “The Slants.” All of the musicians in the group are of Asian descent and Tam has asserted he chose the moniker to reclaim what traditionally has been a slur.

The USPTO did not agree. Citing section 2(a) of the Lanham Act, the trademark office did not register “The Slants” on the grounds that the name was disparaging to Asian-Americans. The agency has exercised its power under that section before, denying federal trademark protection to terms like “Stop the Islamisation of America,” “White Pride Country Wide,” “Amishhomo,” and “Ride Hard Retard.”

The dispute, Lee v. Tam, 15-1293, is now pending before the Supreme Court of the United States. Oral arguments are scheduled for Jan. 18, and attorneys say the case is presenting knotty issues for the eight justices to consider.

Free speech protections are tangled with the differences in commercial and political speech. Also mixed in is the 1946 Lanham Act, also known as the Trademark Act, which regulates trademarks.

If the Supreme Court agrees section 2(a) is unconstitutional, the public could start seeing brand names and logos not usually presented in polite company. Amie Peele Carter, intellectual property attorney with Faegre Baker Daniels LLP, foresees the USPTO being flooded with applications to register disparaging trademarks if the justices find a free speech violation. And she questioned whether the best use of time and resources is having the trademark office handle an overload of applications and objections to scandalous designations.

Moreover, an amicus brief submitted by 33 law schools professors from around the country holds that affirming the band’s position would lead to “widespread chaos” in trademark law. The trademark system’s other bans on registering words or slogans that are deceptive, false, confusingly similar and merely descriptive would be called into question if the section against disparaging marks is found to violate free speech.

“I think it’s a very hard case but I don’t think it’s unconstitutional,” said Notre Dame Law School associate dean Mark McKenna. He was among the professors who signed the amicus brief along with Xuan-Thao Nguyen, director of the Center for Intellectual Property Law and Innovation at Indiana University Robert H. McKinney School of Law.

Even without a registration from the USPTO, the band can still call itself “The Slants” and have some common law protections against unauthorized use. The rejection of the name does not prohibit the musicians from plastering the moniker on concert posters, T-shirts, recording labels and whatever else they want.

An individual or group that first creates a brand for a good or service, putting the name on business materials such as signs and boxes, will be able to enforce their rights to exclusive use even if the brand is unregistered.

Still, common law rights apply only to the general location in which the name is being used. A name might be protected in central Indiana but not in northern Michigan.

In his Supreme Court brief, written by Stuart Banner with assisstance from Eugene Volokh of the UCLA School of Law Supreme Court Clinic and others, Tam scoffed at common law protection. He asserted the denial of federal registration was a “significant blow” because it barred the band from “important legal rights and benefits.”

Getting a registration from the USPTO does provide a “bigger hammer,” said Douglas Gallagher, intellectual property attorney at SmithAmundsen LLC. A registered trademark gives blanket federal protection in all 50 states and over imported goods, giving the trademark owner better tools to fight against knockoffs. Plus in any infringement lawsuit, the owner could seek attorney fees and enhanced damages.

Complaints about the Lanham Act have surfaced in court before, but section 2(a) always has been ruled constitutional. Most notably, the U.S. Court of Customs and Patent Appeals decision in In re McGinley, 660 F.2d 481 (1981), confirmed the USPTO could refuse to register immoral, scandalous or disparaging marks.

In April 2015, the U.S. Court of Appeals for the Federal Circuit stayed with precedent when it affirmed the trademark office’s rejection of Tam’s application. But Judge Kimberly Moore wrote a 24-page addendum to the court’s opinion and called for her colleagues to revisit McGinley.

After the subsequent en banc hearing, the majority of the Federal Circuit found the disparagement section was unconstitutional. Moore wrote the majority opinion.

A particularly “radical claim” made in the decision, McKenna said, was the judges’ position that disparagement depends not only on the content of the name or image but also on the viewpoint of the applicant.

Tam is quoted in a 2011 interview with Northwest Asian Weekly saying that using the name will “reclaim the stereotype” and “take away the power from those who try to use it as a term of hate.”

The federal circuit considered Tam’s viewpoints. But McKenna and his colleagues in their amicus brief argue that trademark law is pervasively content-based and the viewpoint of the applicant is not relevant.

In his dissent to the federal circuit’s ruling, Judge Jimmie Reyna highlighted the debate over whether the band’s name is commercial or political speech. He saw it as commercial and therefore enjoying fewer protections because the government can regulate commerce. Although commercial speech is often intertwined with political elements, Reyna said the commercial character of the speech does not change.

Other cases challenging disparagement prohibition are in the judicial pipeline. A complaint filed by the Washington Redskins after the National Football League team lost is trademark protection is likely the best-known, but there are others, such as one filed by the streetwear clothing brand Fuct.

Both Peele Carter and Gallagher speculated the Supreme Court chose Tam’s case because the issue is not muddied by other matters. The musicians are all Asian-Americans and the word, “slants,” is not as charged as other slurs. Also being of the same heritage as the name disparages casts a different light on the Lanham Act’s section than if a group of white supremacist rockers called their band “The Slants.”

In recent years, the Supreme Court has been on a “sort of free speech kick,” McKenna said. The justices have been finding First Amendment violations in cases they previously might not have entertained. For example, Sorrell v. IMS Health, Inc., 564 U.S. 462 (2011), held that a Vermont law that prevented pharmacies from providing prescription information to data-mining companies was a violation of free speech.

Gallagher was doubtful the Supreme Court would make a broad ruling that section 2(a) was unconstitutional. He predicted that to get a consensus, the justices would make a narrow ruling and let the other aspects of this case bubble in the lower courts for a while.

McKenna agreed but noted the Supreme Court will have a difficult time crafting a narrow ruling that does not significantly impact other aspects of trademark law.

“I think that it’s going to be really hard for them to figure out how to do that in a way that doesn’t have consequences,” he said.•

(Note: This story has been corrected.)