After enacting a rule allowing judges to assign pro bono cases to attorneys who frequently practice in federal court, the U.S. District Court for the Southern District of Indiana is celebrating a “banner year” for pro bono service.

“All of you rose to the challenge in 2016,” the chief judge told the crowd of pro bono attorneys gathered in her courtroom for the annual celebration.

While Magnus-Stinson conceded that the definition of a “volunteer” attorney was altered by the implementation of Local Rule 87 in 2016, she said the service those attorneys provided to their clients made a difference regardless of whether the attorneys volunteered for a case on their own or instead were recruited under the new rule. 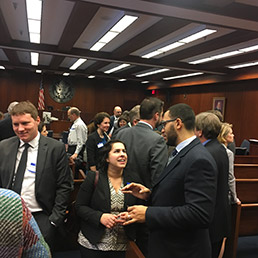 The range of pro bono cases in 2016 was varied, with many focusing on prisoner civil rights cases, Magnus-Stinson said. For example, prisoners brought claims related to retaliation for accommodations to practice their religion, injuries sustained as a result of being forced to sleep on a top bunk after requesting a bottom bunk, and the denial of pain medications while passing kidney stones.

“These cases matter to the individual plaintiffs, and they also matter to our system of justice,” Magnus-Stinson said.

The 7th Circuit Court of Appeals continually instructs district courts to provide pro se litigants with counsel in certain cases, the chief judge said. She referenced the recent decision in the case of Thomas M. James v. Lorenzo Eli and Nicolas P. Villanustre, 15-3034, in which the 7th Circuit reversed the Southern District’s decision for failing to appoint counsel to an Arizona inmate who sustained a broken jaw and ingrown toenail while incarcerated at the New Castle Correctional Facility in Indiana.

Mark Miller, a partner with Bowers Harrison, LLP, was among the attorneys honored at Wednesday’s breakfast. He did not attend the event, but allowed Magnus-Stinson to share his story with his pro bono colleagues. In her account of Miller’s pro bono experience, the chief judge said he was initially wary of the challenges presented by taking a pro se case, but has found through his pro bono experience that the rewards of helping an indigent client outweigh the temporary difficulties.

“My experience has taught me that instead of asking, ‘Why should we give pro bono counsel,’ we should set aside our fears and selfish concerns and take up the challenge of seeking justice and instead simply say, ‘Why not,” Magnus-Stinson read from a statement drafted by Miller.

In the coming months, the Southern District Court will be sending out a survey to its pro bono attorneys to get their feedback on ways the court can offer stronger support for their pro bono work. Currently, the court’s website offers a handbook on pro bono service, a document library offered by the Indianapolis Bar Association and information on obtaining personal and professional liability insurance.

Magnus-Stinson urged the attorneys to offer their feedback so that her court can continue to perfect the enactment of Local Rule 87 and the continued growth of its pro bono offerings.