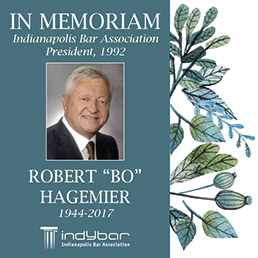 Robert “Bo” Hagemier, 1992 Indianapolis Bar Association President, passed away on Tuesday, March 14 at the age of 72. Hagemier is survived by his daughter, son, two granddaughters and longtime companion.

Hagemier’s IndyBar presidency was marked by various accomplishments. As the leader of the bar, he worked passionately on the consolidation of the former Marion County Municipal Court into the Marion Superior Court of today. The association undertook a revamp of its judicial evaluation process, removing Indiana Supreme Court Justices and Indiana Court of Appeals Judges from the process, while also doing away with personal interviews of judges. The IndyBar also expanded its presence in the Indiana Lawyer during his presidency.

Hagemier’s father, also an attorney, greatly influenced his belief that respect in the profession was at the core of the legal community. This belief fueled his mission to refocus conversations in the bar to maintain collegiality among lawyers and judges.

Hagemier earned his Bachelor of Arts degree from DePauw University and his J.D. from Indiana University School of Law. He was admitted to the Indiana Bar in 1970.

At the time of the his death, he was a partner in Hagemier, Allen & Smith in Indianapolis, where he concentrated his practice in corporate law, administrative law, business transactions and public utility law. Hagemier also served as counsel to the Indiana Funeral Directors Association from 1982 until his death, and in such capacity, coauthored the Indiana Funeral Directors Practice Act, Indiana Preneed Act, Indiana Cremation Act and amendments.