Home » Hammerle on… ‘The Shack,’ ‘Beauty and the Beast’

I went to see “The Shack” with a great deal of doubt. Though growing up a Catholic in a small southern Indiana town where I served Mass during my grade school years, I gave up any form of organized religion years ago. There are many reasons, but it might best be reflected by Buffy Sainte-Marie’s song from “Billy Jack” (1971), “One Tin Soldier.”

However, since director Stuart Hazeldine’s film stars two actors I greatly admire, Sam Worthington (“Avatar” (2009) and “Hacksaw Ridge” (2016)) and Oscar winner Octavia Spencer, I overcame my trepidation and bought a ticket. And with no apologies, I left the theater overcome by the heartbreaking, uplifting experience that left me battling back tears of joy.

In the film, Worthington plays Mack Phillips, a happily married father of three who suffers from childhood memories revolving around the death of his abusive, alcoholic father.

With his wife (Radha Mitchell) staying at home, he takes his three children on a camping trip near a large lake. When he dives into the water to help save his older boy and girl after falling from their canoe, he returns to find his 8-year-old daughter missing. Learning that a pedophile has roamed the woods for some time, what transpires leaves his entire family traumatized beyond words.

The film draws its title from a dilapidated, abandoned small hovel where Mack was forced to observe a blood-stained wooden floor where he identifies his daughter’s red dress found nearby. As time passes, Mack receives a short letter in his mailbox inviting him to revisit that wretched shack. The letter is simply signed “Papa.” Overcome with grief and curiosity, Max takes supplies and a handgun to see what awaits him. What he discovers and experiences is as emotionally powerful as anything you are likely to see on the big screen.

Falling under the guidance of Papa (Spencer), who appears to be God herself, and her young son Jesus (Avraham Aviv Alush), he is forced to examine not just his own life, but life on Earth. In the process, Mack has to discover how to live a fulfilling life when each day is wrapped in agony. He questions the existence of any deity that would permit his daughter to be killed by an assailant. He is left wondering how any human could find happiness under those circumstances.

Ironically, this is not a film that preaches one religion over another. It simply looks to parts of the Bible for guidance, a work embraced by Christians, Muslims and Jews. And while atheists may not buy in to the stories, most still seek to follow the basic moral code laid down for everyone.

What Mack gradually learns is that you can’t find love and happiness if you can’t forgive. Death will take us all at some point, and judgmental people are likely to be so consumed by anger that it will destroy their own lives and those they love.

In this case, Mack confronts his agony after also meeting a woman called Sophia (Alice Braga) and the male Papa (Graham Greene). Mack had to accept the ugly reality that he could only restore his family if he found a way to forgive the very man who killed his daughter. In the process, Mack learned a fundamental principle of life, namely that wretched souls are not born that way, but develop in a society where they have little or no control.

As I watched Mack kid around with Jesus as they raced over the lake surface, I couldn’t help but think how the moral of this film applied to our criminal justice system here in the United States. Like it or not, we base everything from large prison terms to the death penalty on nothing more than hatred and vengeance. We pretend that this will give some type of comfort to those who lost a loved one, but we are kidding them as well as ourselves.

Yes, people need to be punished for criminal violations. However, my wife, a distinguished attorney who has fought the death penalty her entire life, acquired a poster long ago that now hangs in my office. I have displayed it for you here, as it defines the meaning of this film. 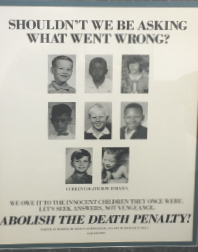 This is a movie about having faith in the human spirit. It calls upon us all to put away hatred, resentment and animosity, and replace it with joy, love, forgiveness and laughter. The time spent on Earth for everyone would be far better if we finally acknowledge that the most condemnable terrorists were once loveable children.

One of the brilliant achievements of this film is that it leaves you in doubt whether Mack’s encounter with God and Jesus at the shack actually happened. Relaying his experience to his family after regaining consciousness in a hospital after a car crash that occurred on his original journey to the shack, Mack was forced to wonder whether his encounter with God was a product of his time spent in a coma.

But whether his moments at the shack happened or emerged from his unconsciousness really didn’t matter. After all, doesn’t history repeatedly prove that genius has frequently emerged from the subconscious?

“Beauty and the Beast”

Every once in a while, a film exceeds its lavish praise. Director Bill Condon’s “Beauty and the Beast” is one of those special films.

While we all know the plot, this is really a love story between a selfish prince who morphs into the “Beast” and a bookish village girl who finds intellectual pursuits to be a key element of a meaningful life.

While Dan Stevens does a superb job bringing style and emotion to the Beast, this film belongs to Emma Watson. Coming off her memorable performances in the “Harry Potter” films, she brings a presence rarely seen on the big screen. Dedicated to her father Maurice (Kevin Kline) and yearning to learn what caused her mother’s death, she challenges male authority in her small town with her devotion to reading and a bit of scientific innovation. And though her singing has been dismissed by some critics, I found her songs to be warm and engaging.

However, I must also note that this is film also belongs to the villain and his loyal assistant. Luke Evans does a masterful job as Gaston, an egotistic narcissist who believes Belle should be his wife simply because he says so. While the name of this film concerns both beauty as well as a beast, Gaston has never seen a more exotic beauty than the reflection he sees when looking in a mirror.

Josh Gad is repeatedly hysterical as Gaston’s loyal, befuddled aide LeFou. Ironically, though countries like Malaysia have banned this movie because of some minor homosexual moments involving LeFou, I must admit that I failed to even see it. Any criticism on this subject is undeserved.

What makes this film so special are the scenes in the Beast’s castle. With contributions from a supporting cast that includes Emma Thompson, Ewan McGregor, Stanley Tucci, Ian McKellen and Gugu Mbatha-Raw, all of the Beast’s loyal employees were changed from humans into talking furniture and other household accouterments. Importantly, they learn to love Belle long before the Beast opens his own heart. While they are all destined to become household implements if the Beast doesn’t find true love before a magical red rose loses its last petal, they all bring a dramatic force that will leave you a bit teary eyed.

I have a sarcastic female colleague who dismisses this film as little more than a suggestion that all women should simply close their eyes and love a violent man long enough, as any leopard will change his spots. However, I strongly feel that she missed the point. If Belle saw success as nothing more than marrying a wealthy, egotistical man with the intellect of a sponge, she would never have rejected Gaston. Furthermore, she only embraced the Beast when she discovered something powerful and meaningful lurking under his physical appearance.

Not a bad lesson for anyone. And with that said, find a way to see this film, and rediscover the kid lurking inside you.•

Robert Hammerle practices criminal law in Indianapolis at Pence Hensel LLC as of counsel. When he is not in the courtroom or the office, Bob can likely be found at one of his favorite movie theaters. To read more of his reviews, visit www.bigmouthbobs.com. The opinions expressed are those of the author.