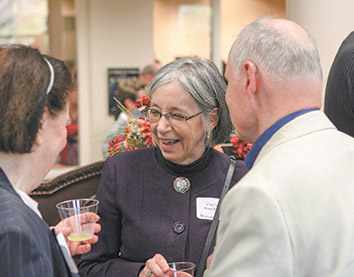 Despite the current atmosphere where politicians decry activist judges and presidential tweets assail court rulings, 7th Circuit Court of Appeals Chief Judge Diane P. Wood is optimistic about the future of the judiciary.

“No one is ever going to be happy with every decision because, as we say, we’re in a line of business where half the people walk away losing,” she said recently while visiting Wabash College. “But if we’ve been a faithful listener, if we’ve tried to respond to the arguments, I think you can leave people with the sense that they got a fair hearing.”

Wood was named Wabash College’s 2017 recipient of the Donald W. Peck Senior Medal for Eminence in the Law. The Chicago appellate judge was on campus April 24 to deliver a lecture titled “Public Service and Private Initiative: An American Tradition” and attend the 44th annual Peck Dinner.

Wood is the second woman to receive the Peck Medal that was first given in 1974. Judge Sarah Evans Barker of the U.S. District Court for the Southern District of Indiana was the first in 1989.

Introducing Wood, attorney and associate visiting professor Scott Himsel noted that in these “times of great strife with government,” the chief judge stands apart. She is able to build consensus with her colleagues across ideological lines as recently demonstrated in Hively v. Ivy Tech, an en banc decision finding that Title VII’s prohibitions against discrimination extend to sexual orientation.

Wood spoke for 45 minutes in an easy, conversational manner. She engaged the audience by calling upon history to explain today’s world, sharing her own experiences and injecting a lively sense of humor.

She compared today’s political climate to the post-World War I world described in William Butler Yeats’ poem “The Second Coming.” The opening lines include the observation that “the falcon cannot hear the falconer.” Wood sees that happening today in that Americans are not listening to each other and tend to surround themselves only with viewpoints that mirror their own.

“Too many people in or out of public life are so busy making their own point that they have lost the skill of finding genuine common ground and working for an acceptable common solution,” Wood said. “Worse, they’ve lost the desire to do so.”

As a result, U.S. citizens are losing confidence in their public institutions. Wood highlighted Gallup polling that showed in 2016 that only 33 percent of the country had a positive view of the presidency, while just a slightly higher 36 percent held the Supreme Court of the United States in high regard. Congress had a dismal approval rating of just 9 percent.

Wood attributed the disappointing ratings to the inability of institutions to identify the problems plaguing society and to propose solutions that foster debate. Sometimes the resulting agreement is so general — like working to save American jobs or providing affordable and high-quality health care for all — it is practically useless.

Still, Wood said, people are not powerless. Each individual can and has a civic duty to better their communities through voting, job choice, volunteer activities and other kinds of engagement.

“Americans have never assumed that government is the source of all wisdom or all solutions,” Wood said. “Indeed, sometimes we have taken this view to a fault but for the most part, that attitude has stood us in good stead.”

Speaking after the event, Wood said the judiciary must make an effort to gain public understanding and support of its work. The courts largely speak through their opinions, so they must be as clear and as easy as possible for a nonlawyer and the media to follow. Also, the courts should work with the organized bar since these associations can serve as advocates for the bench.

Wood was the second woman to join the 7th Circuit and, in 2013, she became the first female chief judge of the Chicago appellate court. She was also one of the first women to clerk for the Supreme Court of the United States and was the third woman hired as a law professor by the University of Chicago Law School, for a while being the only woman on the faculty.

“I’m of a generation where I was often the only woman in the room or the first to do this or that, and I’m glad that’s not the case anymore,” Wood told the Indiana Lawyer in 2013.

A graduate of the University of Texas, where she received her bachelor and law degrees, Wood began her legal career clerking for Judge Irving L. Goldberg of the 5th Circuit. She then clerked for Justice Harry Blackmun from 1976 to 1977.

Wood’s resume includes stints at the U.S. State Department, focusing on international investment, antitrust, and transfer of technology issues, the U.S. Department of Justice and in private practice. In 1980, Wood taught at the Georgetown University Law Center before joining the faculty at the University of Chicago Law School in 1981, where she served as associate dean from 1989 to 1992.

She was nominated to the 7th Circuit by President Bill Clinton and confirmed as a judge in 1995. Twice since, Wood has been shortlisted to fill the vacancies on the U.S. Supreme Court.•