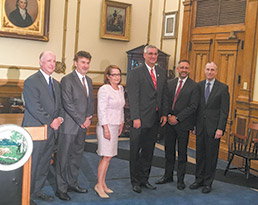 A rural Indiana judge with more than a decade of experience on a trial court bench has been selected as Indiana’s 110th Supreme Court justice.

Wabash Superior Judge Christopher Goff was announced Monday as Gov. Eric Holcomb’s pick to fill the current vacancy on the high court left by Justice Robert Rucker’s retirement one month ago. Goff will move to the state’s highest court after serving in Wabash County for 12 years, beginning in 2005 when then-Gov. Mitch Daniels appointed him to the trial court bench.

Describing himself as a constitutional originalist and textualist, Goff said his judicial philosophy is rooted in the doctrine of judicial restraint. Though he, at 45, will be the youngest person on the bench by roughly a decade, Holcomb said Goff has a “profound respect for the Constitution and the rights and principles embodied within it.”

“Judges should not only take great care to limit the use of their power to strike down laws,” the governor said, “they should also avoid injecting their own personal views and philosophies into the law. Judge Goff is deeply devoted to the cause of justice, and his sharp legal mind has been honed by years of practical experience.”

Aside from his judicial philosophy, Holcomb said he was drawn to Goff because of his belief in fundamental Hoosier values and his experience interacting with people from various backgrounds. For example, Goff’s immediate family is racially diverse, a fact that will enable him to bring the perspective of minority groups to the court. Such a perspective was physically lost when Rucker, the only black justice, retired.


Further, Goff’s life in the rural communities of Huntington and Wabash counties will complement the make-up of the four existing justices, who each have roots in urban and suburban Indiana, Holcomb said. In fact, Goff told a crowd gathered in the governor’s office on June 12 he was riding a tractor when Holcomb called to tell him he had been selected.

The governor further praised Goff for his commitment to programs such as Indiana’s problem-solving courts. Additionally, the judge also touts a record of extensive community involvement, Holcomb said, pointing to his work with the Huntington County Merit Board, including two years as board president, and his establishment of the Huntington County Court Appointed Special Advocate Program.

“Judge Goff, there is no question that Justice Rucker inspired those he served with and the people of Indiana,” Holcomb told the Wabash County judge. “And now you will have your opportunity, as the newest member of the court … to leave your own unique mark and create your own contribution.”

But the decision of selecting Goff as the next Supreme Court justice was not an easy one to make, Holcomb said, noting the quality of the applications submitted by Clark Circuit Judge Vicki Carmichael and Boone Superior Judge Matthew Kincaid. Those two judges were also named as finalists to fill Rucker’s seat, and Holcomb said each of the three candidates he was tasked to choose from were overly qualified to assume a seat on the state’s highest bench.

Goff, surrounded by his family in Holcomb’s office, also praised his fellow finalists, and further went on to say he did not expect to be able to replace retired Justice Rucker, but instead to only succeed him.

As he shook the governor’s hand to publicly accept his new role, Goff shook his head in disbelief that he would soon serve among Indiana’s highest jurists. Asked about his display of emotion, the current Wabash County judge said his humble life and career beginnings never indicated he would one day be asked to join the Indiana Supreme Court.

A date for when Goff would join the Supreme Court has not been announced. His robing ceremony will be held a date determined by the high court.