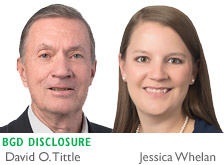 Regional banks across the country are becoming very active in growing by acquisition. Increasing regulation and growing competition for deposit and loan growth are pushing smaller banks to find value for their shareholders through acquisition by larger regional banks. In Indiana alone, seven such merger transactions were announced in the past 18 months, and it does not appear that the merger activity will slow down.

An increase in mergers and acquisitions, however, could mean an increase in a recent trend in Indiana and the rest of the country — the “disclosure-only lawsuit.” How it works is that shortly following the announcement of a proposed corporate merger, a class-action lawsuit is filed alleging that the company-to-be-acquired breached fiduciary duties owed to its investors by failing to provide adequate information on the Registration Statement. Such lawsuits, often wholly lacking in merit, frustrate the parties involved and disrupt the timeline of the proposed merger.

Nonetheless, the company sued is quickly requested to enter into a settlement agreement, provide the information claimed to be lacking and pay plaintiff’s attorney fees. Under this scenario, the company could avoid costly litigation and is permitted to move forward with the merger, the investors get marginally more information than already received, and the plaintiff’s attorney fees are typically large. It is no wonder that the number of these disclosure-only lawsuits, typically filed by the same law firms using cookie-cutter complaints, is increasing around the country. However, the tide may be changing, as courts, legislatures and lawyers are getting wise to the strategy and are finding ways to combat it.

One approach, seen increasingly in Delaware, the most influential venue for corporate disputes, is that judges have begun rejecting “disclosure-only settlements,” signaling an intolerance for lawsuits they deem to have created a “misshapen legal regime” that does not benefit investors. In 2015, for example, a judge on the Delaware Court of Chancery rejected a disclosure-only settlement in a case challenging Hewlett-Packard Co.’s purchase of Aruba Networks. The judge noted that “settling for disclosures only has created a real, systemic problem. We’ve all talked about it for a couple years. When you get the sue-on-every-deal phenomenon, it is a problem.”

Recently, the 7th Circuit followed that same approach in In re Walgreen Co. Stockholder Litigation, 832 F.3d 718 (7th Cir. 2016). In an opinion written by Judge Richard Posner, the court reversed the district court’s approval of a class-action settlement in a disclosure-only lawsuit. The 7th Circuit cautioned that “practitioners should expect that disclosure settlements are likely to be met with continued disfavor in the future” unless such suits plainly have merit and are narrowly focused. The court admonished the plaintiff’s attorneys, recognizing that the only “concrete interest” at play was “an interest in attorneys’ fees,” and suggesting to the district court that it consider either appointing new class counsel or dismissing the suit altogether.

A second approach to dismantling disclosure-only lawsuits is a challenge under the Private Securities Litigation Reform Act, enacted by Congress in 1995 to function as a check against abusive litigation by private parties and eliminate frivolous “strike suits” aimed at forcing corporate defendants to settle claims in order to avoid costly discovery. Under the PSLRA, a plaintiff must plead with particularity that the defendant made a material false or misleading statement or omission in a proxy, that the proxy solicitation served as an essential link in the accomplishment of the relevant transaction, and that there is a direct causal connection between the material misrepresentation and the claimed loss. Many “cookie-cutter” disclosure-only complaints fail to meet this heightened pleading standard due to lack of proper investigation into the claims, leaving them subject to dismissal.

A third Indiana-specific option, based on a longstanding amendment to Indiana’s Business Corporation Law, is available to deal with defending these kinds of suits. This option has been successfully utilized to obtain outright dismissal of disclosure-only lawsuits at an early stage in the litigation.

In 1977, the Indiana Supreme Court interpreted Indiana’s then-named Revised Model Business Corporation Act to mean that, although the statute appeared to preclude dissenting shareholders from enjoining a corporate merger, dissenters were entitled to challenge such a transaction if the merger did not have a “valid purpose.” Gabhart v. Gabhart, 370 N.E.2d 345 (Ind. 1977). This decision created substantial uncertainty about dissenters’ rights. In response, the Indiana General Assembly amended the statute to make clear that the exclusive remedy for a dissenting shareholder in the face of a corporate merger was to sell his or her shares on the open market. This so-called “market exception” is based on the assumption that the market price of the shares adequately reflects a current valuation of those shares. Indiana’s law differs from other states and the Revised Model Business Corporation Act because the market exception applies even if unlawful or fraudulent conduct is alleged to have occurred. Other aspects of the law supplement this approach.

Simply put, dissenting shareholders in Indiana cannot bring suit to enjoin or prevent corporate mergers. The complaints filed in Indiana are in almost all respects identical to complaints filed in states which allow such suits. Indiana courts have been increasingly willing to deny preliminary injunctions sought by dissenting shareholders and to dismiss these suits in their entirety. Swiftly responding to meritless disclosure-only lawsuits keeps the proposed merger on course.•

• David O. Tittle is a partner and Jessica Whelan is a senior associate in the commercial litigation group of Bingham Greenebaum Doll LLP. They handle corporate merger litigation. The opinions expressed are those of the authors.