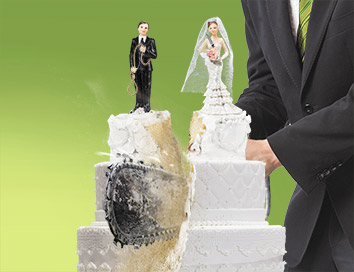 Fort Wayne attorney John Brandt hopes the rise in anger among his divorcing clients is just a blip.

In the last five years, he’s seen spouses more willing to argue and go to court rather than collaborate and compromise on a settlement. The issues at the center of these disputes are the same that splitting couples have always fought over — child custody, support and division of property.

Brandt, senior partner at Beckman Lawson LLP, draws upon his nearly 40 years of experience to warn clients of the “hangover effect.” Battling and badmouthing the other spouse might fracture the relationship so severely they will not be able cooperate as parents and work in the best interest of their children once the divorce is finalized.

Yet clients don’t always heed the advice. Brandt sees husbands and wives who want their voices heard taking a more combative approach. He speculated that people may be feeling more empowered or, with the economy improving, assets are more valuable and worth fighting to get.

A recent survey by the American Academy of Matrimonial Lawyers indicates many divorce attorneys are experiencing similar behavior with no relief in sight.

Of the 1,650 members who responded to the questionnaire, 54 percent said they have seen more contentious divorce cases in the past three years, and 52 percent said divorcing spouses are becoming more hostile.

John Slowiaczek, president of the AAML and managing principal of Slowiaczek Alberts PC LLO in Nebraska, believes the rising anger in divorces is a reflection of the decay within the larger society. Families no longer sit around the dinner table together. People spend more time looking at their cellphones than talking to one another. Fewer people are going to church, and more are focused on their personal gratification instead of what’s best for the community as a whole.

For the last 20 years, Slowiaczek said, he and his colleagues have been saying divorces cannot get worse, but each year the outrage and bitterness escalate. Compounding the situation is technology. Divorcing clients often have been ruled more by their emotions than their intellect, and social media allows them to unleash a tirade instantly. Before the internet, they would have had time to cool down and realize their reaction is silly.

In Evansville, Michael Macer of Biesecker Dutkanych & Macer LLC regularly cautions his clients against sharing naked pictures and airing dirty laundry in cyberspace. Facebook posts can come back to haunt them, text messages can be saved and phone conversations can be recorded. He tells his clients the trail they leave will likely be used against them at some point.

This can be part of highly contentious divorces that call for attorneys to not get swept up in the fight. Macer said lawyers have to remember that pulling the “nuclear option” on the opposing party can create fallout that plagues the family long after the final decree has been signed. An extra incentive for lawyers to be the calming presence may be the ability to close the file.

“Highly contentious cases don’t go away,” Macer said. “They continue to pop back up.”

Can’t do this alone

To Mark James of Anderson Agostino & Keller P.C. in South Bend, divorces were worse when he started practicing in the mid-1980s. Attorneys in those days had a “gladiator mentality,” he said, doing whatever they could to win. If a woman said her husband was a jerk, her lawyer would insist the dad not be allowed visitation.

Attitudes and behaviors have since softened. James attributes the shift to parenting, which takes two to better handle the demands of raising a well-adjusted child. In addition, moms and dads sometimes need a break from caring for their children, so even though they might be hurt over the divorce, they are grateful the other spouse wants to be more involved.

As a consequence, attorneys in Indiana say they are seeing more fathers push for longer visitations with their offspring. These dads have been involved in their children’s lives and want to remain so even though the family is breaking apart.

However, it is still a divorce. When a father wants to have his children more often, this can spark a dispute because an increase in overnight stays will mean he has to pay less in child support. Sometimes the fights for visitation are more about money than about spending time with their kids.

The local economy can add another complication to parenting time schedules.

Huntington attorney Mathew Roth of DeLaney Hartburg Roth & Garrott LLP and solo practitioner Sara Pitcher in Kokomo often represent clients who work in local factories on differing shifts. When the couple is married, mom working first shift and dad working second shift creates a harmony in the household because one parent will be home with the children. But once they split, disagreements sprout over issues such as who’ll watch the kids, overnight stays, and how to transfer the kids between shifts.

Perhaps in a sign that couples are trying to lower the temperature of their divorces, more clients are requesting a guardian ad litem help determine custody. Lawyers across the state say they have seen an uptick in these professionals being brought in to evaluate and make recommendations to the court.

Generally, family law attorneys view this as a positive change. The guardians ad litem know the law and can look at the dynamics of the divorce with fresh eyes. Judges often adopt their recommendations and, even though the spouses can dispute the conclusions, the guardian ad litem’s report usually encourages parties to reach a settlement.

Regardless of the tone of the divorce, the causes for untying the marriage knot have not changed. Financial difficulties, struggling to reconnect after the children move out and infidelity are still driving couples to end their unions.

For attorneys Lanae Harden and Christine Douglas of Harden Jackson LLC in Carmel, family law lawyers should be the calming presence in the whirlwind. Amicable dissolutions are typically faster, less expensive and will have fewer issues that crop up post-divorce. Particularly important, children will be less likely to get caught in the middle of the arguments.

“Nothing good ever came out of a contentious divorce. Ever,” Douglas said.

Civility among opposing counsel can prevent an acrimonious divorce. Harden noted some clients want her to dislike and be difficult with the other attorney, which is contrary to what judges expect. Having practiced in family law for more than 20 years, Harden has developed collegial relationships with many lawyers, so she is upfront with clients about her friendships.

And while having the divorcing spouses work together to reach a settlement is optimal, Douglas has seen more clients turning to the courts in recent years. She does not view that as a troubling trend. Sometimes going to court is the best way to resolve sticky issues.

Being a family lawyer is a “tough way to earn a living,” Harden said, noting they often provide emotional support to clients. But the goal remains getting the spouses and children to a good place after the divorce so they can move forward.

Pitcher agreed. “You do get those cases where you see an actual positive impact on a person’s family,” she said. “That’s the most important thing in their life is their family.”•