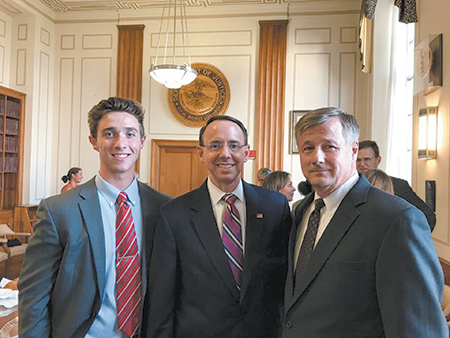 When a driver plowed into a crowd protesting white supremacist marchers this month in Charlottesville, Virginia, Thomas Wheeler II said the crime undoubtedly leapt to the top of the priority list at the Civil Rights Division of the Department of Justice.

“The thing about the Civil Rights Division is, on any day, you’re on the front page of the paper,” said Wheeler, a partner at Frost Brown Todd LLC in Indianapolis who served as acting assistant attorney general for the division after President Donald Trump was sworn in Jan. 20. “You lose control of your calendar,” he said, because priorities change along with the fast-moving, high-profile events such as crimes against religious groups, police shootings, and now, Charlottesville.

Wheeler said in an interview that Attorney General Jeff Sessions is committed to civil rights, though differently than AGs in the Obama administration. He also acknowledged the sometimes-turbulent atmosphere at the agency during and after the transition.

“I spent a lot of time with the staff because there were a lot of concerns about the position the new administration would take on civil rights,” Wheeler said. “There was a lot of rhetoric about massive cuts in the Civil Rights Division … people were very unsure what was going on.” He assured career employees the division wouldn’t lose funding or staff, and it didn’t.

“It gave truth to what I’d been telling people — we’re going to aggressively enforce civil rights. Now, the focus may be different from the prior administration. I focused very aggressively on hate crimes.”

The focus on hate crimes was a response to a spate of police shootings across the nation, the death penalty prosecution of Dylann Roof for murdering nine black parishioners in a church in Charleston, South Carolina, and other major cases. But Wheeler said he’ll most remember one case that began and ended during his time at DOJ — the rash of more than 100 bomb threats against Jewish community centers across the country that began in January.

“It impacted every Jewish individual in the United States,” he said. “You have to take every threat seriously.”

“One, it was so pervasive; two, it has such an impact on the community, and I spent so much time with those groups; three, the complexity of the investigation … and four, was who it ended up being,” Wheeler said. Michael Ron David Kadar, an Israeli-American living in Israel, was 18 when he was arrested and charged in April.

Civil Rights Division spokesman Devin O’Malley praised Wheeler’s leadership. “We are grateful for his service and dedication to protecting the civil and constitutional rights of all individuals.”

Wheeler recounted conversations he said illustrate Sessions’ commitment to fight hate crimes and carry out the division’s mission. Critics have questioned Sessions’ willingness to stand up for the rights of minorities, among other things. Wheeler said he saw otherwise while working from his conference room that was the former office of FBI founding Director J. Edgar Hoover.

Sessions, for example, believed the division should take a fresh look at several murders of transgender people. The AG made his case to Wheeler and another official who were skeptical of anything linking the crimes, and they told Sessions so. “This is a guy who’s gotten such a bad rap on this stuff,” Wheeler said, adding Sessions’ insistence on a re-examination led to the reopening of two cases.

Likewise, Wheeler said Sessions went against his political grain by enforcing the Freedom of Access to Clinic Entrances Act against Operation Save America protesters who sought to confront patients entering a Louisville abortion clinic, the last in Kentucky.

“We had federal marshals out there dealing with them for a week while they were trying to blockade it,” Wheeler said of the protesters. “We had the lines, and it was very, very clear that if they violated it, they were going to jail.”

Sessions, Wheeler said, “is a rule of law guy. ‘The law says it, I’ll enforce it, I don’t care. I may disagree with the law, but Congress passed it, I’m going to enforce it.’” 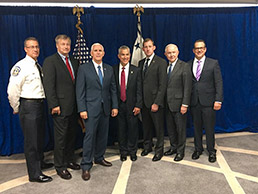 Wheeler said he’s as establishment Republican as they come. A longtime party activist, he was general counsel to Vice President Mike Pence when he was governor. Jeb Bush was the latest in a line of Bushes he’s worked for. After the former Florida governor dropped out of the race, Wheeler, like Pence, endorsed Texas Sen. Ted Cruz for president in 2016. When Pence joined the Trump campaign, Wheeler went to lead Pence’s effort in Florida, then held transition positions at DOJ and the Department of Education.

“It’s an interesting mix, I will say that,” Wheeler said of Pence and Trump. Pence, he said, “strikes me as being a rock out there. … He’s going to tell you what he thinks, he’s going to act in a principled fashion, and he’s got the relationships on the Hill that, I think, are just extraordinarily helpful.”

Trump’s impulsive tweets and unorthodox style caused some disruption at the DOJ, Wheeler said. The president fired acting Attorney General Sally Yates and later hinted at firing Sessions for his decision to recuse himself from the Russia collusion investigation. “The drama is there, people talk about it, and it got fairly intense,” Wheeler said.

“What’s cool about (the Department of) Justice and the career people is, it operates,” he said. “It works, and it continues to work, regardless of this stuff.”

Back at Frost, Wheeler’s office is next to that of lawyer Kevin Murray, but the two are miles apart politically. Murray is a longtime Democratic Party establishment activist, but he and Wheeler agree on this much: The political atmosphere in Washington, especially in the confirmation process, is turning away qualified people.

“We definitely are,” Murray said. “I get really disappointed in what’s happened over time. … I have the utmost respect for Tom, and I think people who aren’t involved politically don’t realize how, traditionally, those who are, are so much alike.” Murray for years worked in the General Assembly and said the spirit of service transcended political affiliation.

“Tom has that same attitude — ‘Yes, I’m a Republican, but I’m a Hoosier, and I’m going to do what’s best for the state,’” Murray said. “I’d feel more comfortable if there were more Tom Wheelers involved.”

Wheeler seems content back home. In Washington, he said, “right now the atmosphere is so toxic. … I give tremendous credit to the people who will go out and serve in the middle of this environment.

“We’re not that far apart — our Republicans, our Democrats — there isn’t this gulf, but we’re just ripping each other,” he said. “That’s going to be a real challenge, pulling things together.”•