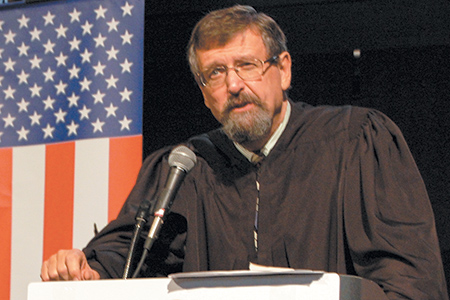 A workhorse court within the 7th Circuit, the U.S. District Court for the Southern District of Indiana has long been designated as a judicial emergency. It’s now having to cope with the caseload made heavier by the recent deaths of two colleagues.

On top of this, the court has had a vacancy since June 2014 when Sarah Evans Barker assumed senior status. The court will not get a replacement for McKinney because his seat was filled — by now-Chief Judge Jane Magnus-Stinson — when McKinney took senior status in 2009.

Magnus-Stinson said the judges are doing their best with the cases that come before them.

However, she said, the court must get a new judge to succeed Barker. And long term, the district needs to get the additional judgeship the Judicial Conference of the United States has recommended. But Congress, so far, has not acted.

Currently, the Southern District has a total of five judgeships and seven magistrate judgeships.

The court is in a state of judiciary emergency because of the existing vacancy and a weighted caseload of more than 800 cases per judgeship. In the 12-month period ending June 30, the weighted filings per judgeship stood at 915, ranking the Southern District of Indiana first in the circuit and second in the nation in terms of caseload.

Faegre Baker Daniels LLP partner Brian Paul, who practices primarily in the appellate courts, agreed with Magnus-Stinson that the Southern District needs to fill the open seat and get a new judgeship. Also, he expressed frustration that the legislative and the executive branches have not adequately addressed the crisis occurring in many district courts.

“I think it’s a black eye on the political branches that they can’t seem to get their act together to fill now long-vacant seats even in districts that are deemed judicial emergencies,” Paul wrote in an email, adding the judiciary operates on “a pittance” compared to other items in the federal budget. “It’s a wonder our courts get as much done as they do under the circumstances. It’s a real tribute to our public servants.”

EXTRA
Click here to see how the U.S. District Court for the Southern District of Indiana workload has increased.

A call for renomination

Magnus-Stinson said her court is grateful for the help and likely will be calling for more assistance.

Glenn Sugameli, senior attorney and founder of Judging the Environment, a nonprofit that tracks judicial nominations, said the help from other courts in the 7th Circuit is better than nothing but not ideal. He said the out-of-state judges do not know the Southern District of Indiana, the lawyers, or Indiana state laws that are often at issue in federal cases.

The best option, he said, would be for President Donald Trump to renominate Winfield Ong for the Barker vacancy. Ong, assistant U.S. attorney for the Southern District of Indiana, was nominated by President Barack Obama in January 2016 and unanimously approved by the Senate Judiciary Committee but never received a vote by the full U.S. Senate.

Because Ong underwent the committee review process just last year, he would not need to sit for another hearing, Sugameli explained. Rather, the committee could take another vote then forward his nomination to the Senate for confirmation.

“It’s just a situation where you have a real desperate need that is getting more desperate,” Sugameli said of the Southern District of Indiana. “This is the obvious, easy solution.”

Another advantage to putting forth Ong is that he would skip to the front of the growing line of judicial nominees. At present, about 34 individuals have been tapped to fill district court vacancies and are waiting for a hearing by the Judiciary Committee. A new Indiana nominee would likely have to wait months and months to get a hearing.

Renominating Obama picks is not unprecedented. David Nye was confirmed in July for the U.S. District Court in Idaho after the Idaho Republican senators urged Trump to renominate him. Like Ong, Nye previously passed through the committee under the Obama administration but did not get a Senate vote.

Similarly, renominated candidates are being put forth for district courts in Oklahoma, South Carolina and Texas.

Although Todd Young has replaced Dan Coats as Indiana’s Republican senator since Ong was initially nominated, Sugameli does not believe that would be an obstacle to a renomination. He said Young would have to vet Ong, but given that the first-term senator is not ideologically much different from Coats, Young would probably consent.

Still, Congress has the final say in adding more judges to the federal courts and has been reluctant to do so. Senate Judiciary Committee chairman Sen. Charles Grassley, R-Iowa, who has opposed new judgeships in the past.

The Southern District has been taking applications and reviewing candidates for the magistrate judge position held by LaRue. Individuals for magistrate judgeships are selected by the courts and only have to undergo a federal background check rather than a full nomination and Senate confirmation process.

Magnus-Stinson, who first served as a magistrate judge for about three years before being confirmed as a district judge in 2010, hopes to have that vacancy filled by the first of 2018. She also does not believe the heavy workload will deter qualified candidates from applying.

“I still think it’s a wonderful job, both the magistrate judgeship and the district court judgeship,” she said, “and I think they are still coveted positions.”•