Home » Theater company stages ‘The Originalist’ to get people talking 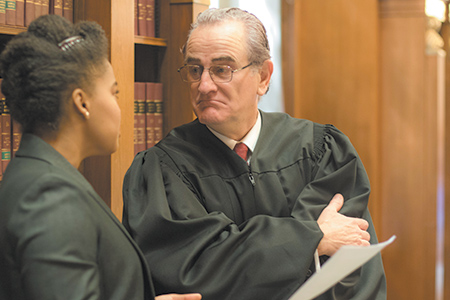 Woronicz, whose credits include seven years at the Oregon Shakespeare Festival, will be portraying Scalia in the new production of “The Originalist” by the Indiana Repertory Theatre. The play explores the interactions between two politically and personally very different people — Scalia, an Italian-American man with a conservative viewpoint, and his law clerk, an African-American lesbian with a very liberal perspective.

Confessing he disagrees with the justice on some fundamental things, Woronicz connects with Scalia through texts. Scalia adhered to viewing the Constitution and laws through the eyes of the Founding Fathers and legislators, learning what the words meant at the time they were being written, in order to render a faithful translation.

That is, Woronicz said, very much what actors do when preparing a Shakespeare play. They always wrestle with the text, trying to determine what the meaning of the words were as Shakespeare would have understood them.

Language, perception and meaning are the themes of “The Originalist” as the main characters each try get beyond labels and exteriors to comprehend the other’s sense of the world. The drama humanizes the larger-than-life justice and his law clerk to show they are more than just a compilation of their political opinions and social beliefs.

That is a lesson that IRT executive artistic director Janet Allen thought was important to offer in these polarized political times. With many wondering how the country became so divided and worried the nation might not be able to heal, this play encourages audiences to think how they can bridge the differences and have conversations with people who hold opposing views.

“One of the things that has happened in this extreme polarization is that people can’t talk about it,” Allen said. “They don’t have the language to talk about it and you don’t want to lose your relationships with your family and friends, so you pussy-foot around it. A play like this might hopefully give some people some inroads into talking about what they’re seeing.”

“The Originalist” was commissioned by the Arena Stage theater company in Washington, D.C., and written by playwright John Strand. Molly Smith, Arena artistic director, said Strand came to her about four years ago with the idea of writing a play about Scalia, who he saw as one of the most polarizing and gregarious figures in America.

The IRT will be the first theater in the United States to produce its own version of “The Originalist” — other theaters in Florida and California have staged the Arena’s production — and Woronicz will be the first actor to play Scalia since actor Ed Gero created the role.

With a small cast — Scalia, his very liberal law clerk, Cat, and another law clerk, Brad — the play includes scenes in the justice’s chambers at the Supreme Court. The audience gets to eavesdrop on their conversations while the characters discuss and argue modern-day issues. Although snippets from Scalia’s opinions and writing are incorporated, the play is not a docudrama or a biopic, but rather an imagination of what the justice would be like in this mythical setting.

Smith sees the play as having everything — red meat politics, complicated personal relationships, the dangers of power and “a fiery battle” for the soul and ideas of another. It all comes wrapped in a behind-the-scenes look at the Supreme Court, some of the most important cases of our time, and a search for common ground.

“Realizing that people are complex and deserve to be heard, listened to, and to have a voice is a very important message,” Smith wrote in an email, noting the message applies to Republicans and Democrats. “We all need to be better listeners and that will always be relevant.”

To prepare, Woronicz, a visiting professor in the Department of Theatre, Drama and Contemporary Dance at Indiana University, has read extensively about Scalia, reviewed some of his opinions and watched videos to flesh out the man and make him a three-dimensional character on stage. The actor speaks fluently of the justice, knowing details of his life, such as his father being a translator of Italian texts, and the funny stories.

“It’s been really kind of fun to learn about who the historical Scalia really was,” Woronicz said. “On some level, you learn to like the guy.”

Ayanna Bria Bakari, who plays Cat, gained some insight into her role by talking to a former clerk of Justice Sonia Sotomayor. Being a man of color, he provided important details about clerking for a justice who was of a different gender and race from him.

James Strain, partner at Taft Stettinius & Hollister LLP and supporter of the IRT, described “The Originalist” as a dramatization of what happens at the Supreme Court. At the request of the theater, Strain will lead a post-show discussion after the Nov. 5 performance with one-time U.S. Supreme Court law clerks Ted Boehm, former Indiana justice and partner at Hoover Hull Turner LLP, and Stanley C. Fickle, retired of counsel at Barnes & Thornburg LLP.

Strain knows well how the storied court operates, having clerked for the late Chief Justice William Rehnquist during the October 1972 term. The play depicts heated arguments between Scalia and Cat, but Strain noted while the law clerks were expected to be inquisitive and offer counter views, it was difficult to argue with the justices.

Rehnquist had such a sharp mind that he could remember the facts and interpretations contained in the United States Reports, right down to the page number, so challenging him was gutsy and intimidating.

Strain described his clerkship as wonderful and indicated his continuing affection by regularly referring to his former boss as “my justice.” Still, he said for other clerks serving different justices, the job could be hellish. For example, Justice William Douglas would get angry and “fire” his clerks, forcing them to work through his secretary rather than directly with him. Also, Justice Harry Blackmun kept ungodly hours, keeping his clerks toiling from early morning to late at night.

“The Originalist” does not require that audience members be lawyers or have a deep knowledge of the Supreme Court. Strand has avoided writing a purely intellectual debate between the characters. Instead, he provides quick summaries of court cases so laypeople can access and understand what happens.

IRT’s Allen sees the play appealing to a broad audience as an entertaining, enlightening and conversation-provoking piece of theater.

“I think what’s wonderful about the play is we will all come in with our opinions,” Allen said, “but we will go out with something a little different.”•