Home » No longer a taxing process of review

In the past, the tax protest process at the Indiana Department of Revenue has been synonymous with words like “slow,” “tedious” and “unfair.”

Staff members at the department don’t deny that, but rather acknowledge it as a very real part of their past. For example, it was previously common for taxpayers to wait weeks or even months for their protests to get docketed with the DOR’s legal department, and once a protest was docketed, there seemed to be no rhyme or reason to the order in which the department responded to taxpayers. Those kinds of issues led to complaints from taxpayers and their lawyers, who claimed the department was being neither efficient nor fair in its handling of protests.

But when DOR Commissioner Adam Krupp took over the department in January, he decided to revamp its policies to focus more on customer service. Working alongside general counsel Patrick Price, Krupp implemented a new customer-oriented protest review system that has slashed taxpayer wait times and also helped increase efficiency at the Tax Court.

“My perspective is, just because it’s government doesn’t mean we have to be slow or accept that’s the way it’s going to be, so let’s just come up with a new way and let’s improve the system,” Krupp said.

The revenue department began its protest optimization process in February, when Price became general counsel. One of the first steps he and Krupp took was to go through a process of internal planning and develop a set of potential changes that could be presented to tax practitioners for review.

Randy Kaltenmark, a partner in Barnes & Thornburg LLP’s tax department, was among the practitioners who were asked to participate in roundtable discussions with the department this spring. The department also distributed surveys to practitioners seeking feedback on possible improvements.

During those discussions, the department made a commitment to accelerate the timetable for resolving protests, an idea that Kaltenmark said was met with general optimism. Some questions did arise from practitioners who were concerned they might have reason to file for extension, but once the department assured them that it would not implement a “one size fits all” model that forced every protest to follow the same timeline, the he said the practitioners’ concerns eased. 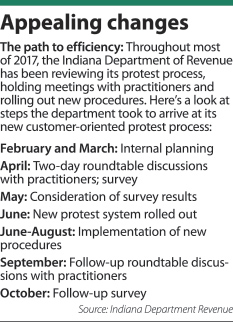 Though those promises sounded good, Price said based on past experience, many practitioners were skeptical of whether his department would keep its word and implement efficient practices. But determined to change the perception of government employees not caring about taxpayers, Krupp and his team rolled out a series of changes over the summer that have led to marked improvements in the tax protest process.

Those types of changes are each designed to further the legal department’s overall goal: resolving all protests within 110 days. That goal is the first time the DOR has used a time-based metric to monitor its protest responses, Price said.

In his own practice, Kaltenmark has already seen an improvement in the time it takes the department to respond to one of his cases. Though he has a few legacy cases that are outstanding from years past, Kaltenmark said the new cases he has filed this year are being resolved much faster.

But even the number of legacy cases is decreasing, Price said. As of the end of September, there were 177 pending protest cases at the DOR, a 58 percent decrease year-over-year. Similarly, 19 percent of open protests in September 2017 were pending more than six months, compared to 39 percent at the same time last year.

“Speeding up the time period is a good thing because it keeps things from getting stale,” Kaltenmark said.

The DOR’s changes have also made a positive impact on the Tax Court, whose docket has traditionally been dominated by department cases. While there were more than 100 DOR cases on the Tax Court docket at the beginning of 2017, that number dropped to just 18 cases by September.

The reason for that sharp decrease is linked to a mindset change at the revenue department, Price said. Rather than litigating every dispute, no matter how minor, he said his department is trying to be more selective in which cases it chooses to appeal.

Tax Court Judge Martha Wentworth praised that change in thinking, as she said it now allows her to hear cases that present significant questions of law. That represents a change from cases she has heard in the past, which dealt with simple disputes involving dollar amounts.

Rather than taking those kinds of cases to court, Krupp said he believed those issues could be settled. To that end, he recently sent a letter to parties involved in DOR tax disputes, inviting them to settlement discussions. Many of those cases did settle, freeing up Wentworth to focus on more pressing tax law issues, he said.

Change at all levels

Kaltenmark noted that throughout his 20-year career, there have been times when the DOR has been efficient, and times when it has not. The department is currently in a time of efficiency, he said, a fact that Wentworth attributes to multiple factors.

First, the Tax Court judge noted that when Gov. Eric Holcomb took office in January, he brought in new, young leaders such as Krupp who have a unique perspective on how state government should run. She also said that all parties in the tax process — from the clerk who mails tax forms to the clerks in her chambers — are on the same page in terms of their commitment to efficiency.

Wentworth herself has made changes in her office that have helped her move cases at a faster pace. For example, borrowing an idea from another judge, she has begun holding attorney conferences to resolve discovery issues, such as motions to compel.

Those issues have traditionally taken up significant time on her docket, yet can often be resolved outside of the courtroom, Wentworth said. Now, through her use of attorney conferences, Wentworth can help the parties resolve discovery issues without having to hold court hearings, which enables her to get to the merits of her cases sooner.

Looking toward the future, the revenue department plans to continue to solicit feedback from tax practitioners to get their thoughts on areas for additional improvement. The department already has held a second round of discussions with the practitioners — which Price said generated generally positive comments — and a second survey will be distributed to give them the opportunity to share their thoughts more extensively.•