More than 75 years ago, the United States government built a series of prefabricated homes in Charlestown, Indiana to provide housing for military employees who worked at the nearby Indiana Army Ammunition Plant. The homes were intended to last for roughly 10 years, but many are still standing today, with some well-kept and others falling into disrepair.

The state of the World War II-era homes, located in the Pleasant Ridge neighborhood, has given rise to a contentious property rights dispute between the Charlestown city administration and Pleasant Ridge residents. While Mayor Bob Hall and city attorney Michael Gillenwater say their method of using code enforcement to force improvements in the neighborhood is legal, the Pleasant Ridge residents claim their elected officials are illegally charging them excessive fines to force them out of their homes.

Specifically, a group known as the Charlestown Pleasant Ridge Neighborhood Association sued the city in Clark Circuit Court, where they alleged Hall and his administration excessively fined them nearly $9,000 for code violations on a duplex in an effort to further a plan to raze the low-income neighborhood and build homes for more affluent residents in its place. While code enforcement is legal, the residents claim the “excessive” fines merely allow the city to get around eminent domain restrictions and redevelop the neighborhood as it pleases.

The dispute over Pleasant Ridge property rights traces back to 2014, when the city considered using federal blight-elimination funds to completely rebuild the neighborhood. But after a “vocal minority” of residents spoke out against the plan, Gillenwater said the city withdrew its application and instead turned to a code enforcement plan to improve the neighborhood.

The use of such code enforcement is what gave rise to the legal disputes in Charlestown Pleasant Ridge Neighborhood Association Corporation, et al., v. City of Charlestown, Indiana and Charlestown Board of Public Works and Safety, 10C02-1701-CT-010.

According to Gillenwater, the city announced in February 2016 that it would begin inspecting at-risk rental properties, such as those in Pleasant Ridge, in August. Despite that advance notice, many landlords chose not to make the necessary improvements to their properties, resulting in fines being assessed against them, Gillenwater said.

The city gave the landlords three options for responding to the inspections, Gillenwater said: making improvements to their properties, paying the fines, or selling the properties to Pleasant Ridge Redevelopment, LLC. Through an agreement with the Charlestown administration, the redevelopment group agreed to buy Pleasant Ridge properties for $10,000 each, with the goal of redeveloping the entire neighborhood.

While Pleasant Ridge LLC has successfully purchased roughly 160 homes of the 344 remaining in the neighborhood, a few residents are holding out and fighting what they consider the use of excessive fines to force them from their homes. Central to the Clark County litigation are members of the association that owns the duplex that was subject to $8,950 in fines for multiple code violations — Joshua Craven, Tina Barnes, David and Ellen Keith and Ann Eldridge. The plaintiffs sued on behalf of the neighborhood association.

Anthony Sanders, an attorney with the Institute for Justice, which sued Charlestown on behalf of the residents, said he and the residents took issue with the fact that the city began assessing fines against the association immediately after discovering code violations at the duplex, yet did not inform the residents of the violations for several days. He said that move was a due process violation and was an attempt to heap heavy fines on the residents so that they would have no other financial choice but to sell their homes to the redeveloper.

But Gillenwater dismissed those accusations and said it is not uncommon for municipalities to use code enforcement as a method of improving rougher neighborhoods. He also said the city’s only goal is to ensure residents live in a healthy and safe environment. Pleasant Ridge poses a threat to both health and safety, as it is a central hub for issues such as drugs and dog bites, he said.

Gillenwater also noted that previous efforts to improve the neighborhood through code enforcement and other city efforts failed. Thus, he said the only way to ensure the health and safety of Charlestown residents is to entirely redevelop the neighborhood.

The Clark County case is currently pending consideration of the residents’ motion for a preliminary injunction to stop the city from “issuing huge, daily-accumulating fines” as part of its “illegal and unconstitutional scheme to drive the citizens of an entire neighborhood from their beloved homes … .” 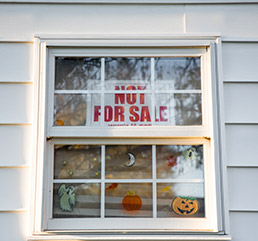 Residents who oppose the Pleasant Ridge redevelopment plan have used protests including “not for sale” signs on their homes. (Photo courtesy of Institute for Justice)

Both sides expressed confidence in their ability to succeed on the preliminary injunction motion, with Gillenwater saying the residents’ argument was based in emotion, not law. Sanders, however, said the residents raise legitimate legal claims that the city cannot defend against.

Once the preliminary injunction issue is resolved, the case will likely move toward questions regarding eminent domain. Under Indiana Code section 32-24-4.5-7, the complaint argues a city can take a property through eminent domain “only if the specific parcel at issue individually presents an immediate and urgent threat to public health and safety.”

All parties agree that Charlestown has not yet used eminent domain in its efforts to redevelop Pleasant Ridge, though the residents allege in their complaint that the assessment of high fines is merely a tool to get around eminent domain law. Further, Gillenwater said the use of eminent domain is not completely off the table, as the city believes Pleasant Ridge is a threat to public safety and is considering all options to remove that threat.

When the eminent domain questions do arise, Eric Rochford, an eminent domain attorney with Cohen & Malad LLP, said it will likely present a question of first impression to Indiana courts. Rochford is serving as local pro bono counsel for the Institute for Justice on the residents’ case.

Rochford expressed concerns about the potential implications of a ruling in favor of the city on eminent domain issues. For example, if a judge rules the city’s plan to redevelop the neighborhood does qualify as a “public use” that would make eminent domain permissible, then the low-income residents would be left trying to find a new home, he said.

But Gillenwater said the city has already helped subsidize a new housing development where Pleasant Ridge residents can move into energy efficient homes with lower utility bills and increased home equity. He also said the administration has paid for the residents to participate in a pathway to home ownership program.

Aside from concerns about the residents’ living situations, Rochford said the implications of a ruling favorable to the city on eminent domain issues could possibly lead to an abuse of eminent domain laws by municipal government entities and developers.