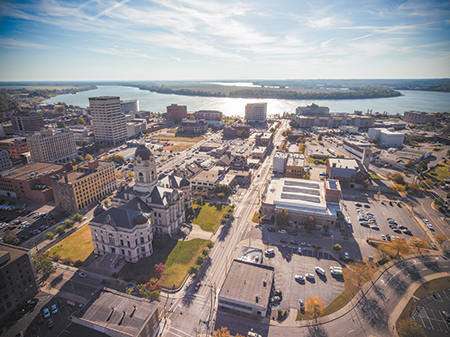 When making the pitch for Evansville to host the National High School Mock Trial Championship, attorney Scott Wylie was prepared and slightly nervous about the tough questions he expected from the national organization.

But the main query covered the one aspect of hosting the competition that posed no concern – would Evansville be able to enlist enough volunteers?

With a population of 119,477, Evansville would be the smallest city to welcome the national competition since Wilmington, Delaware, with a population then of 72,657, hosted it in 2007. Even so, Indiana Bar Foundation executive director Charles Dunlap and board member Wylie were confident the tight-knit legal community in Evansville would be the catalyst for getting many members of the bench and bar to volunteer.

Those selecting the site for the national championship were convinced, and Evansville will host the 2020 event, scheduled for May 6 through 9. About 900 high school students, teachers, parents, attorneys, and judges will travel to the southern Indiana city for the event, infusing more than $1.6 million into the local economy.

Evansville has been experiencing a revitalization of its downtown with a new hotel having opened earlier this year and the new Indiana University Medical School nearing completion. More hotels are planned and new restaurants and retailers are opening in the central part of the city. The bar foundation and city leaders tout Evansville as offering the mock trial students plenty of amenities and unique experiences.

However, Max Fiester, past president of the Evansville Bar Association, noted for this competition, the city cannot solely rely on hotel rooms and convention space. Having an infrastructure of people to help with the event is vital, he said, and he is certain the local bar will come together to do the work as it has for other events in the past.

Although the competition does not start for more than two years, the bar foundation will soon be launching a fundraising campaign with the goal of bringing in $240,000. Dunlap said the bulk of the money will go toward the formal dinner that will be held Saturday evening for the students after the championship round.

Also, the bar foundation is hoping to use some of the funds to support a state regional mock trial competition in southern Indiana. Currently, Indiana mock trial is dominated by teams from the central and northern sections of the state, but the national competition is being viewed as the spark that could potentially ignite interest in the state contest among southern Hoosiers.

Dunlap acknowledged the mock trial fundraising could eat into the annual donations made to the bar foundation. Consequently, the campaign will start early to give donors enough time to fulfill their pledges and will be presented as an opportunity to give extra.

The bar foundation plans to reach beyond its normal donor base for the mock trial and solicit national entities. As Dunlap explained, the championship will create a prime opportunity for educational organizations and certain businesses to connect with some of the brightest students in the country.

As for getting volunteers, the bar foundation has tapped Indiana Court of Appeals Judge Melissa May to lead the recruitment effort and unveiled a website that includes a page where interested attorneys and judges can leave their contact information.

“It’s exciting and a little bit daunting,” May said.

Between 400 and 500 volunteers are going to be needed just for judging the four rounds of competition. Each courtroom will require a presiding judge to run the mock trials and four to five scoring judges to rate the students’ performances.

Other volunteers will be needed to help with registration, direct teams to their courtrooms and collect the scoring sheets. Not only are lawyers and judges from neighboring states expected to travel to Evansville to help with the competition rounds, but the bar foundation will be working to enlist legal professionals from around Indiana to also make the trip and volunteer.

“I have absolutely no fear that the Evansville Bar Association and the judges association along with attorneys and judges statewide will step up and make this the best experience that the kids have ever had,” May said.

Fiester participated on his mock trial team at Castle High School in Newburgh, a town just up the Ohio River from Evansville. His senior year, he and his teammates traveled to Denver, Colorado, where they competed in the national championship and missed their prom in the process.

“We got a nice steak dinner in downtown Denver,” Fiester recalled. “It wasn’t exactly the same, but it did take the sting out of missing prom.”

Scott Barnhart, secretary-treasurer of the bar foundation board of directors, also participated in mock trial when he attended Castle High School and was a member of the teams that went to nationals in Pittsburgh, Pennsylvania, and Nashville, Tennessee.

Both credit their mock trial experience with inspiring them to become lawyers. Barnhart, with support from Fiester, was the driving force behind getting the bar foundation to bring the national champion back to Indiana and have Evansville be the host city.

Indianapolis was the location for the 2013 national mock trial event. Hundreds of students descended on the city, many attorneys and judges volunteered, and Marion County judges offered their courtrooms for the competition. Yet, the larger community was mostly unaware of the activity.

In Evansville, the coming competition is the talk of the town. Barnhart knew the community would rally around the event and, coupled with the blossoming of the downtown and some nearby neighborhoods, he is certain the 2020 mock trial championship will be one the students and other participants remember. 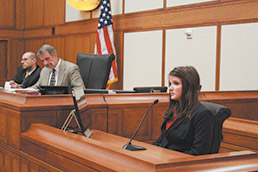 The annual competition will bring about 900 students, teachers, parents and other supporters from around the country — and possibly outside its borders — to Evansville to show off their lawyering skills. (Photo courtesy of Indiana Bar Foundation)

“The show of support is meaningful and demonstrates we’re going to have a lot of support going forward,” Barnhart said.

Students from across the country as well as possibly South Korea, Guam, the Commonwealth of Northern Mariana Islands and the U.S. Virgin Islands will flow into Evansville for the competition. They will stay in hotels located downtown – some yet to be built – and at the Tropicana casino. They will convene in the Old National Events Plaza, which has recently undergone a $3.5 million renovation, and they will compete in the courtrooms at the county courthouse.

Mayor Lloyd Winnecke ticked off the places the students could visit when they take a break from the competition. They can tour the museums, the zoo, the warship USS LST-325, or Bosse Field, the third-oldest baseball park in the United States.

He is also optimistic the event could reap long-term benefits for his city. Namely, the students might be enticed to enroll in either the University of Evansville or the University of Southern Indiana. Likewise, their parents and supporters might consider expanding their businesses or starting a new venture in community.

Mock trial will “bring people to Evansville who may have never heard of Evansville,” Winnecke said. “This is a great opportunity to make a wonderful first impression.”•