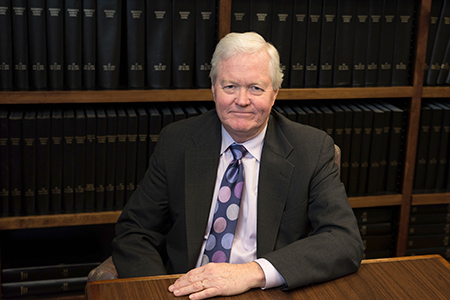 On the heels of criticism from a national organization and multiple lawsuits challenging Indiana’s public defender system, Indiana lawmakers and legal stakeholders are beginning to review the state’s public defense mechanisms to identify strategies for improvement.

Led by retired 7th Circuit Court of Appeals Judge John Tinder, the 17-member Task Force on Public Defense was formed to address the concerns about Indiana’s provision of indigent defense services outlined in a report released by the Sixth Amendment Center last year. The extensive 228-page report took issue with the Public Defender Commission’s lack of oversight over counties not participating in its reimbursement program, and its inability to enforce cooperation with commission-created caseload standards among counties that do participate. The reimbursement program offers to pay participating counties 40 percent of the cost of providing indigent defense services, but due to funding troubles, the commission has not always been able to reimburse the full amount promised.

As a result, even participating counties have failed to maintain what the commission has determined to be reasonable caseload requirements. The result has been overworked public defenders and concerns about ineffective client representation. The task force was created to examine those and other concerns about the state’s indigent defense shortcomings and begin developing a plan to fix the broken system.

“We’re taking a look at the particulars of that report and other criticisms, and also positive information about public defense in Indiana,” said Tinder, who agreed to lead the task force after the death of its original chair, Senior District Judge Larry McKinney.

The task force so far has met four times and is still in the information-gathering phase of its work. One of the central issues the members are researching is how to exert quality control over the 33 counties that choose not to participate in the reimbursement program, said Larry Landis, executive director of the Indiana Public Defender Council.

Without the promise of state money, there is no leverage to force those counties to comply with caseload maximums, Landis said. That problem is exacerbated statewide with regard to misdemeanor indigent defense, which is not reimbursed at all. Thus, one of the task force’s first orders of business is to find a better model to ensure there is a level of quality control present in indigent defense services across all counties, Landis said.

“There’s no constituency that demands high quality services, and the consumer, the person being represented, can’t fire their lawyer if they’re providing poor quality representation,” he said. “We’ve got a perfect storm in terms of constitutionally mandated services, but … nobody else is making sure there’s an adequate quality of representation provided, and that’s what the task force is looking at.”

At the appellate level, the Sixth Amendment Center report recommended the creation of a statewide appellate defender office “as a check against inadequate trial-level representation.” Such offices are present in other states, but not Indiana, said Joel Schumm, a professor at Indiana University Robert H. McKinney School of Law, who sits on the task force and chairs the appellate post-conviction subcommittee.

As part of its work, Schumm’s subcommittee has been evaluating national standards and best practices in other states to find which public defense systems enable clients to receive the most effective representation, he said. The main goal is to develop an appellate system that provides a level of consistency across the state, considering each Indiana county currently has autonomy to structure its services as it pleases.

For example, Marion County has its own public office, while other counties employ a contract system in which public defenders who contract with a court are called in to provide services when needed. That system was the impetus for a lawsuit filed in October 2015 against the Johnson County Commissioners, county judges and a group of contracted public defenders.

Jon Little, an Indianapolis attorney representing the plaintiffs, who are current and former Johnson County defendants, said the contract system has resulted in county public defenders handling caseloads well over acceptable maximums. That’s led to forced plea deals and minimal contact between the defendants and their court-appointed attorneys, Little said.

After the Shelby Superior Court dismissed that case in January, it went before the Indiana Court of Appeals for oral arguments on Dec. 7. Jessica Wegg, counsel for the plaintiffs, told the panel of judges Edward Najam, Elaine Brown and James Kirsch the indigent defense system is unconstitutional as applied in Johnson County because the excessive caseloads cause the defenders to provide counsel that is below the constitutional requirements. Wegg found support for the ability to challenge the public defense system before a final outcome in her clients’ cases in Gideon v. Wainwright, 372 U.S. 335 (1963) and United States v. Cronic, 466 U.S. 648 (1984).

But Kyle Hunter and William Barrett, counsel for the judges and county commissioners, grounded their argument in Strickland v. Washington, 466 U.S. 668 (1984), which established a test for determining whether an attorney provided ineffective assistance of counsel. The Strickland test could provide relief for the appellants, but only once their cases have concluded, the attorneys said.

The Sixth Amendment Center also criticized the contract system, calling on the state to prohibit contracts that create conflicts of interests among public defenders whose income is contractually based on the number of cases they hear. Considering the issues raised about contract-based public defense, Schumm said his subcommittee is evaluating all options to provide a consistent method of competent, independent representation for indigent defendants.

One of the greatest strengths of the Task Force on Public Defense is its inclusion of stakeholders from varied backgrounds, Tinder said. The 17 members were selected from courts, law schools, the Statehouse and other legal organizations to provide a range of perspectives that touch on all aspects of the criminal justice system, he said.

Justice Christopher Goff, who sits on the task force, said the collaborative approach to sharing perspectives and developing ideas among the members is reminiscent of similar work he did while on the Wabash Superior Court bench.

Wabash is one of the 59 Indiana counties participating in the commission’s reimbursement program, so he joined the task force with a prior familiarity of the struggles public defender offices can face in trying to comply with commission-imposed caseload maximums. Additionally, Goff said his county consistently tried to implement best practices to make the courts run efficiently and effectively, such as introducing multiple problem-solving courts.

“What I found in my past job and in this one is when you work in a collaborative process, it benefits all parties concerned when you work toward improving an area of common concern,” Goff said.

Members of the public also will be invited to work with the task force on public defense reform. At least three public hearings will be held that will give stakeholders an opportunity to express their concerns about the current indigent defense system, or to offer their ideas for improvement, Landis said.

Additionally, Tinder noted the group is accepting written comments via email or mail. Information about hearings and comments will be posted on the task force’s website, www.in.gov/publicdefender/2333.htm, as it becomes available.

Looking to the future

Each of the task force members agreed it’s too soon to predict what the results of their work will be, though they did offer ideas about what those results could look like.

Landis, for example, reiterated his goal is to create a system that empowers a state body to evaluate and ensure compliance with commission standards. Schumm predicted public defense systems in other states will likely influence the recommendations the task force puts forth for a revised system in Indiana.

Landis also emphasized the goal is not to completely overhaul Indiana’s existing public defense framework, but rather to take the components that are working and build on them to create a more effective system. The task force is expected to begin turning its research into recommendations by next summer, when it can then begin planning to introduce potential legislation during the 2019 legislation session.•