Like many family arguments, the dispute that led to the sudden resignation in December of Mary Beth Bonaventura as director of the Indiana Department of Child Services started over money.

Bonaventura claimed that at a time when the opioid epidemic is fracturing households across the state, tight funding limited the agency’s ability to protect children. Her resignation letter detailed serious problems she saw at DCS, largely caused by lack of money, and concluded with the plea that the Governor’s office must change how it approaches the child welfare system, or, “I fear lives will be lost and families ruined.”

The departure of Bonaventura surprised several family law attorneys and social service providers. Uniformly, they agreed the former Lake County juvenile judge was a strong advocate for children and brought valuable experience to her tenure.

Still, the department has struggled against internal and external challenges. Some lawyers declined to speak publicly about problems they have encountered and what they believe could be done to better the situation.

But many pointed to continued staffing problems. There are not enough case workers or case managers, which has led to excessive caseloads and turnover rates. Calls get dropped, messages are not received, and families become confused about what they need to do. One attorney recalled a family that had six different case managers, each with different expectations, in a case that lasted 18 months.

Layered on top of this is the skyrocketing number of children entering the system because their parents are addicted to opioid painkillers or heroin. The Indiana Judicial Service Report shows filings of new Children in Needs of Services cases escalated from 11,325 in 2012, to 20,063 in 2016.

DCS does need more “boots on the ground,” attorneys said. But money to pay for them is not the only fix. “I think that’s what has to happen right now,” Lindsay Faulkenberg, attorney at Kids’ Voice of Indiana, said of increasing funding levels. “The problem is here. It’s in front of us and we’re facing it right now. Short term, we need money. Long term, I think, we need to look at the issues and do more prevention and less reaction.” 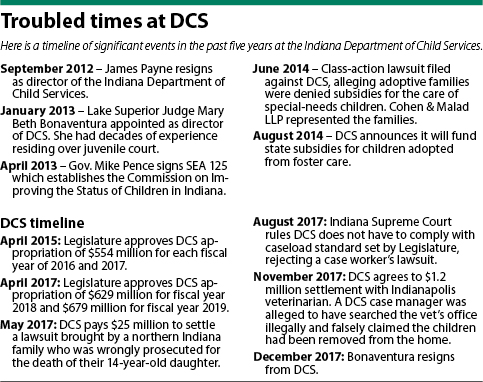 The trend reversed after the death of 10-year-old Tramelle Sturgis in South Bend in November 2012. Despite pleas to DCS and law enforcement about abuse, the boy died after an evening of being repeatedly beaten with a wooden rod and burned with an iron.

The case threw a spotlight on DCS practices, particularly the use of a central call center to handle reports of abuse and the “Safe Home-Families First” policy that held to the philosophy of keeping children in their homes when possible to avoid the emotional trauma that can come with removal.

Even so, in her letter of resignation, Bonaventura pointed to cuts in funding made without her knowledge by the agency chief of staff, appointed by the governor, “that all but ensure children will die.”

Gov. Eric Holcomb issued a four-sentence statement in response to Bonaventura’s departure. Although he said he was grateful for Bonaventura’s service, he seemed frustrated with her concerns about the budget.

“…We are providing record funding to DCS with nearly half a billion dollars more in funding support over the next two years,” he said in a statement. “We will continue to do all we can to protect children.”

Money and other needs 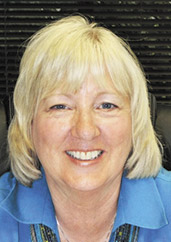 Reviewing the situation, Cindy Booth, CEO of Child Advocates, said the increase in funding may have come at a price — notably, increased scrutiny. As the agency’s appropriation rose, the Legislature likely wanted to see different outcomes. Instead, with the growing CHINS cases, showing improvement has been difficult.

“Nobody questions Judge Bonaventura’s commitment to children,” Booth said, noting she had a very difficult job leading DCS. A big bureaucracy dealing with troubled families and children by its nature can be hard to change.

“Sometimes it’s not more money that will fix it,” Booth said, explaining a different style of leadership or looking at different ways to provide services may be solutions. Meeting the challenge of the CHINS crisis will “take a lot of strong leaders around the table.”

Indianapolis attorney Robert Schembs agreed the answer is just not money but, he said, more funding “opens a lot of doors.”

Schembs has represented families before DCS for years and has seen other waves of narcotics, such as crack cocaine, bring a flood of abused and neglected children. A key for handling the current epidemic is less turnover among case workers so they can build experience dealing with troubled homes.

Money might help hire and keep more DCS employees but, Schembs said, that is only a Band-Aid solution. The real problem is too many people having children they cannot or do not want to care for. And the best remedy for that would for a grassroots groundswell to change public attitude, like how drunk driving became socially unacceptable.

The ongoing parade of new case workers and case managers has been a concern for DCS since before Bonaventura became director in January 2013.

Having represented families before the agency for roughly seven years, attorney Elizabeth Cox has noticed inconsistency in how cases are handled from one county to the next. Situations that will get children removed from a home in one county may not in another county.

The unpredictability has baffled parents, said Cox, who recently joined Kids’ Voice as a staff attorney. As families move around the state, mothers and fathers are unsure about what DCS expects.

Brian Zoeller, family law attorney at Cohen & Malad LLP, credited Bonaventura with trying to correct problems at DCS. During the Payne administration, he said he encountered case workers unfamiliar with state statutes and sometimes unnecessarily adversarial, which added to costs and created inefficiencies.

With Bonaventura, the agency’s attorneys and case workers seemed more focused on the best interests of the children, Zoeller said. Even so, high turnover persists. A family will establish a relationship with the DCS representative, then someone new takes over the case. The relationship is gone, and the just-arrived case worker gets a load of cases, leaving no time to build a new connection with the parents and children.

In 2015, DCS case manager Mary Price filed a class action lawsuit against the department, alleging the caseloads exceeded limits set by the Indiana General Assembly of 12 active cases and 17 children. Her own work required her to monitor about 43 children.

The Indiana Supreme Court dismissed the complaint. All five justices ruled the statute does not require the department to take specific action.

DCS still is not complying with the state standard. In her presentation to the Indiana House of Representatives Ways and Means Committee in January 2017, Bonaventura noted only one of the 19 DCS regions in Indiana was meeting the state’s caseload requirement.

ACLU of Indiana legal director Ken Falk, who represented Price, maintains the repeated use of the word “shall” makes the statute clear. The caseload limits set forth in the law are not aspirational, but intended to be adhered to.

“I find it very depressing,” Falk said, noting the caps are still being exceeded. “I think that means we’re putting children at risk.” 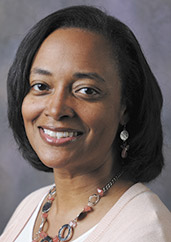 The day after Bonaventura left DCS, Holcomb announced the appointment of Terry Stigdon, clinical director of operations at Riley Hospital for Children at IU Health in Indianapolis, as the department’s new director. Her first day will be Jan. 22.

David Siler, president and CEO of Families First, said the swift change in leadership was a “serious surprise.” He was expecting a national search would be conducted given the nature of the job and that few would be qualified to lead an agency responsible for child welfare.

DCS “enters families’ lives at one of the worst possible moments,” Siler said. When the state agency comes to investigate an allegation, the children may be taken from the home. “Nothing gets more emotional than that.”

Moreover, the opioid epidemic battering Indiana will do long-term damage. As Siler explained, children of troubled parents likely will have difficulty learning, struggle to hold down a job, and be prone to developing a substance abuse problem themselves.

Echoing Faulkenberg, Cox advocated for prevention. She said families often become involved with DCS because they cannot get help with their mental health and addiction issues. If more resources were available to address those problems, that might reduce the number of CHINS cases.

Cox emphasized that she respects Bonaventura and the work done at the department but, she said, “the answer to everything is not necessarily giving DCS more money.”

Democrats in the Indiana Senate and House are calling for the Legislature to investigate the concerns raised by Bonaventura. Republicans have nixed the idea of public hearings and instead want to wait for the Child Welfare Policy and Practice Group, an outside consultant hired by Holcomb, to complete its review of DCS.

Zoeller maintained the agency needs to be child-centered, putting resources in the right place, and keeping its promises. “I saw that under Bonaventura,” he said.•