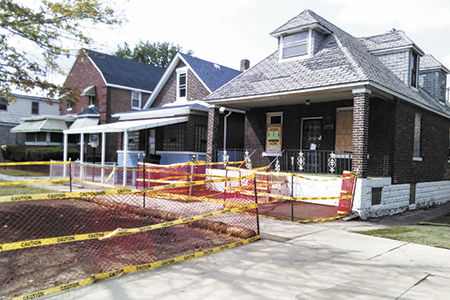 Two Statehouse Democrats from northwest Indiana know the cleanup of the contamination site in East Chicago will not only take years but also a steady state commitment.

Sen. Lonnie Randolph and Rep. Earl Harris, both of East Chicago, have authored bills in the Indiana Legislature related to the environmental disaster in their hometown and are encouraged the situation has drawn the attention of Gov. Eric Holcomb as well as the Trump administration.

Randolph said the commitment has been made to provide the resources needed but, because the effort may take a decade or longer, that commitment will have to be sustained. As administrations change, that resolve may weaken.

“If there’s a lacking (in the commitment), then there’s going to be another delay in terms of getting a remediation,” Randolph said.

contamination of lead and arsenic left behind by industries such as U.S.S. Lead, Atlantic Richfield Co. and E.I. du Pont De Nemours. West Calumet, a public housing project in the contamination zone, is slated for demolition. Homeowners also living on the site are concerned about their health and property values.

During the 2017 session, Randolph and Harris tried to get the General Assembly to waive a nearly $3 million loan taken by the School City of East Chicago school corporation to relocate Carrie Gosch Elementary School.

But when the budget was signed by the governor, the provision had been left out.

Harris indicated he was under the same impression as Randolph. “I was surprised and disappointed,” he said of the final budget, “since our understanding was it was going to be included.”

Randolph has again introduced legislation, Senate Bill 118, that would absolve the school corporation of having to repay the loan.

He believes the Statehouse can handle money matters during short sessions and, as an example, pointed to legislation filed by Sen. Ryan Mishler, chair of the Appropriations Committee, which would transfer to $25 million to cover a shortfall in the Tuition Reserve Account.

In a statement, Mishler said he sees no reason to consider Randolph’s measure.

“I’m not planning on hearing the bill since we addressed East Chicago Schools last year,” the Republican said in an email. “Last year we agreed to freeze the (average daily membership) for two years to provide additional funding to the school corp. instead of loan forgiveness.”

Harris said the battle will be to not let East Chicago be forgotten. The key to cleaning and redeveloping the site, Harris said, is “money, money, money.”

A few years ago, the U.S. Environmental Protection Agency had entered into a settlement whereby Atlantic Richfield and E.I. du Pont would provide about $26 million for remediation. However, in 2017, residents of the neighborhood filed a petition with the U.S. District Court in the Northern District of Indiana, trying to intervene in the agreement.

Magistrate Judge Paul Cherry denied the residents’ motion in U.S.A. et al. and Atlantic Richfield Co., et al., 2:14-cv-312. The court found every resident was mailed a letter, detailing the remediation plan, and was given the opportunity to comment. Yet they waited until two years after the consent decree was issued to try to intervene.

Annette Lang, an attorney with the U.S. Department of Justice, argued against the residents’ motion to intervene.

She contended that allowing the homeowners to join in would disrupt the remediation of the Superfund site. She pointed to precedent from the 7th Circuit Court of Appeals that held Congress concluded that delays caused by citizen challenges posed a greater risk to the public welfare than the possibility of EPA making a mistake in its response.

Judge Philip Simon pointed out officials have known the site was contaminated since the mid-1980s.

“Don’t you feel a little silly, 35 years after finding out about this problem that you’re concerned that the citizens are going to delay this?” he asked Lang.

Lang countered that the residents are not entitled to intervene in the remedy. They have to wait, according to the 7th Circuit’s interpretation of the Comprehensive Environmental Response, Compensation and Liability Act, until the remedy is completed.

The plaintiffs’ attorney, Emily Gilman, associate with Goldberg Kohn, Ltd., asserted that the CERCLA does allow for the people most affected by the contamination to have a say in how the remediation is being carried out. They have a right to enforce the consent decree once the remediation begins.

Goldberg Kohn has also filed a separate suit on behalf of homeowners who have seen their home values plummet. They claim they cannot sell or rent their homes because of the lead and arsenic.

The complaint in Cristobal and Theresa Alverez et al. v. Atlantic Richfield Co., et al., 2:17-CV-00414, was filed Northern Indiana District Court. The defendants were due to file their answer by Jan. 22.

Randolph noted the East Chicago situation reflects the balance that may have to be struck between the environment and economic prosperity.

The industries blamed for polluting the city provided a great number of jobs. People settled in northwest Indiana because they could easily find work that paid wages that allowed them to buy homes and take care of their families.

In turn, the economy boomed and city coffers filled with tax revenue. Public officials were able to provide more services to their residents.

To completely remedy contamination, Randolph said, would require the elimination of all the manufacturers. But that would reduce the jobs available, force residents to leave and depress the local economy.

“It could be an enduring situation where we have to accept what’s going on and just continue to do the best we can,” he said. “Everything is interrelated to one another, so it’s kind of hard to come up with an immediate cure. And that’s the difficulty of situations like this.”•