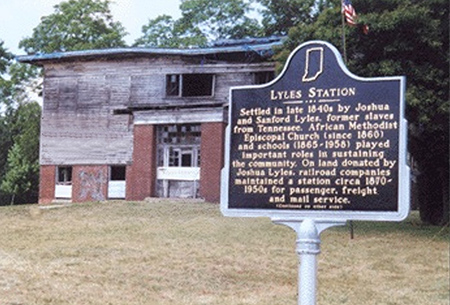 Tucked in the far southwestern corner of the Hoosier state, a tiny community not big enough to be considered a town has quietly spent the last 175 years advocating for the advancement of black Indiana residents.

Lyles Station, an unincorporated community along the Patoka River in Gibson County, is long past its heyday of 800 residents working their farms, practicing their trades and educating their children. But as the only historic rural black settlement still standing in Indiana, the remaining Lyles Station residents have dedicated their lives to preserving the legacy of their ancestors.

Lynch led a discussion about Lyles Station during the U.S. District Court for the Southern District of Indiana’s annual Black History Month celebration on Feb. 2. Stanley Madison, a lifelong Lyles Station resident who is now chairman and founder of the Lyles Station Historic Preservation Committee, recounted the tale of his oldest ancestors coming to Indiana from the south nearly 200 years ago.

Named for one of its first residents, Joshua Lyles, Lyles Station began to take shape in the 1840s, when the earliest settlers began establishing family farms and working as blacksmiths and lumberjacks, Madison said. But even from the start, the people of Lyles Station had a desire to include their voices in national political discussions. 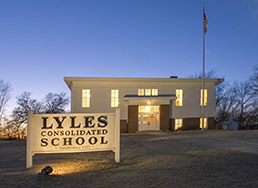 The Lyles Consolidated School in Lyles Station, Indiana, restored after 33 years of disuse, is now a museum honoring the history of the black settlement in Southern Indiana. (Photo courtesy of Lyles Station Historic Preservation Corporation)

Fast-forward to 1871, and the residents of the black settlement had successfully petitioned the government to allow them to send their children to school, a right Madison said they earned by dutifully paying their taxes. The original principal of the Lyles Consolidated School was so dedicated to ensuring his pupils were well-educated that he required all sixth- through eighth-graders to learn 16 spelling words and their definitions daily throughout the school year.

“If you add that up — nine months out of the year for three years — how well would you be knowing your words?” Madison said during the presentation.

Those efforts paid off, Madison said, as Lyles Station produced citizens who made a positive impact on the community and the entire nation through their service to the armed forces and to government leaders. Among those residents was W.H. Roundtree, the first black postmaster north of the Mason-Dixon Line.

The Gibson County community also produced James Roundtree, a local resident who successfully argued on behalf of his settlement before the Indiana Supreme Court in the 1880s. The case of The State ex rel. James Roundtree v. The Board of Commissioners of Gibson County, began when a wooden bridge constructed in the late 1850s or early 1860s began to deteriorate. The bridge crossed the Patoka River and was designed to shorten the trip Lyles Station residents had to take to get across the river. 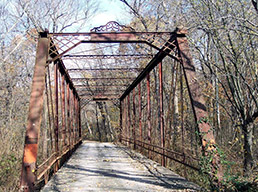 The “Black Bridge” across the Patoka River in Lyles Station is a part of community history at the center of an 1881 Indiana Supreme Court case. (Photo courtesy of Lyles Station Historic Preservation Corporation)

When years of changing weather patterns began to wear on the structure — known as the “black bridge” despite being red — Lyles Station’s residents first turned to the Gibson County commissioners for help. The county officials initially declined, telling the residents they had no resources to continually maintain the bridge, but the settlers didn’t give up.

Though Roundtree was a black man trying to successfully bring litigation in the 1880s, Madison said his attorney encouraged him to continue his legal fight because he believed in the cause. Then in 1881, after a series of failures, the Indiana Supreme Court agreed to hear the bridge case and ultimately ruled in Lyles Station’s favor.

The 19th century high court bench found it was the county’s responsibility to maintain the local bridge, with Justice Byron Kosciusko Elliott writing it would make more sense to replace the structure, rather than continually repairing it. Taking Elliott’s advice, the bridge was eventually replaced and remains an important piece of infrastructure for the Lyles Station community today, Madison said.

Though frequent flooding problems forced many Lyles Station settlers to relocate in the early part of the 20th century, the legacy the early black settlers built lives on nationally through the “Power of Place” exhibition in the Smithsonian National Museum of African American History. Joshua Lyles’ own horse-drawn plow and other artifacts have been on display in the Washington, D.C. exhibit since 2016.

Back home in Indiana, local diversity advocates say the judiciary’s celebration of progressive black communities such as Lyles Station is an important step in the promotion of diversity in the Hoosier legal community.

To attract more minorities into the legal profession, particularly the judiciary, young people need to be able to picture themselves working as attorneys and judges, said Norris Cunningham, chair of the Indiana State Bar’s Diversity Committee. When legal professionals gather to celebrate black leaders such as Roundtree, then young people are likelier to feel they have a place among Indiana’s judges and top attorneys, Cunningham said.

Though he was unable to attend the Lyles Station event, Cunningham had previously learned of the community through a conversation with John Morton-Finney, the civil rights activist who was believed to be the longest-practicing attorney in the country, working for a span of 85 years before his death in 1998. Morton-Finney spoke highly of the Lyles Station settlers, so Cunningham did his own research and became inspired by the strides the community made for black people in Indiana and across the country.

“He talked about it with a real sense of pride,” the Katz Korin Cunningham, PC shareholder said. “…It was just really touching to learn about it from him.”

More work to do

Through organizations such as the Diversity Committee and the Marion County Bar Association, diversity advocates say Indiana’s legal community continues to make its own strides toward diversifying the profession. Julian Harrell, president-elect of the MCBA, said increasing diversity is largely a matter of overcoming fear of that which is different and celebrating the opportunities that open when people from all walks of life are included in the legal profession.

As a starting point, Harrell said the Hoosier legal profession should put its efforts toward promoting more black attorneys to partner positions. Law firm partners are the attorneys who make the most significant decisions, so it’s vital for attorneys from all backgrounds to have a say in those decisions, Harrell said.

Young black law students want to make those decisions and are often inspired by Indiana diversity leaders such as former Supreme Court justices Myra Selby and Robert Rucker, said Ashley Moise, program director of the Indiana Conference for Legal Education Opportunity. Programs that celebrate such diversity leaders give young black people something to aspire to, Moise said, thus inspiring them to become legal trailblazers in their own rights.

But even with bar associations and programs such as ICLEO championing the cause of diversity, the attorneys said the Hoosier state still has progress to make.