The Indianapolis Bar Association was saddened to learn of the passing of retired Marion Superior Court Judge Patricia Gifford on April 8. Judge Gifford was a true leader of the entire legal community and a pioneer for women attorneys. She was recognized several times by the IndyBar, receiving the Silver Gavel Award in 2008 for her exemplary service on the bench and the Antoinette Dakin Leach Award, which honors trailblazing women in the profession, in 2006.

When I became an attorney in 1999, Judge Gifford was likely the most well-known judge on the Marion Superior Court bench, not only because she had presided successfully over one of the most famous trials in Indiana history, but because she simply had a reputation as an outstanding judge who maintained decorum in her courtroom and who issued fair, well-reasoned decisions. While I appeared before her on a small handful of occasions prior to her retirement and had the pleasure of meeting her outside of the courtroom, I wanted this message to be filled with words of those who knew her best.

Below are comments from judges who served with her on the Marion Superior Court bench and from attorney Jim Voyles, who met Judge Gifford in law school in 1964 and, along with a few of his classmates, is likely the IndyBar member who knew her the longest. I invite you to read the comments below (as well as Judge Sarah Evans Barker’s message in this issue) and reflect on the impact Judge Gifford had on our profession.

Patricia Gifford was a generous mentor to me and many other judges and a true trailblazer. When I first became a lawyer in the late 1980s, Judge Gifford provided the incentive that being a female judge was an attractive and attainable goal. She presided over some of Marion County’s most high profile criminal cases and made it seem easy. She was the epitome of professionalism; always prepared and highly respected and she accepted no nonsense, yet she was always courteous, kind-hearted and helpful to lawyers. Her passing is a great loss to the Indianapolis legal community.

Judge Gifford and I worked closely together for two years when she served as Presiding Judge of the court. I learned so much from her. She managed her duties with integrity, dignity and grace, with never a show of anger or discourtesy to anyone. She was extremely adept at building coalitions among members of the bench and bar that continue today. We all became better judges as a result of her steadfast leadership, collegiality, and enduring friendship.

Pat Gifford was a pioneer for female lawyers and a great mentor for all of the women judges on the Marion Superior Court bench. Pat’s door was always open when you had a legal question or needed guidance on the art of judging, or the “softer” side of judging. Pat kept control in a courtroom like no one else could. The lawyers knew she meant business when she gave them “that look.” She brought needed order to the administration of the courts when she was the presiding judge and was the most respected judge on the bench during the 16 years I was there.

She had a wonderful marriage to her husband, Bob Butsch, and they had a lot of fun together. Of course, the loves of her life were her daughter, Jennifer, and her grandsons. In court, Pat was no-nonsense, but outside of the courtroom, she always kept me laughing. I frequently thought how surprised some lawyers would be if they could have seen this side of Pat Gifford. Those of us who were blessed to know the real Pat will remember her laughing, with that twinkle in her blue eyes, and her very warm heart. 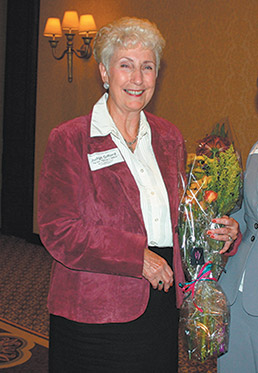 Judge Patricia Gifford was the 2006 recipient of the Women and the Law Division’s Antoinette Dakin Leach Award aimed at recognizing trailblazing females in the legal profession.

I met Judge Gifford in my first year of law school in 1964 and we were friends from then on. I believe she was one of only three women who were sworn in with 75 of us in the Indiana Supreme Court in 1968.

I recall Judge Gifford rising through the ranks of our profession and successfully taking on her male counterparts, including none other than F. Lee Bailey, in the courtroom as Deputy Attorney General and later as one the nation’s first sex crimes prosecutors. As a judge, she was hard-working and tough, but fair. She kept things close to the vest and she ran an excellent courtroom. Off the bench, she was a different person who had a great sense of humor. She will be missed by her friends and the legal profession.

When I first became a state court judge, I was invited by the Indiana Judicial Center to choose a mentor judge. I chose Pat Gifford because I wanted to learn from the best. She readily accepted, and we became good friends. Pat was wicked smart, funny and very kind to me. She left me with three great lessons to guide me as a judge:

Party loyalty is fine, but loyalty to the court is far more important.

None of it matters more than your husband and your children.

May she rest in peace.