Ellen Boshkoff is described as a powerhouse litigator and leader in the employment practice at her firm, but she’s also a respected mentor as well as a dedicated educator at her alma mater. In addition, she’s a leader by example in her profession, dedicating many hours in her career to pro bono efforts in federal court. 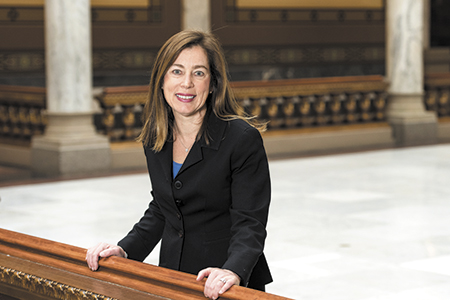 What’s the best tip anyone ever gave you about preparing for a trial?

Prepare, prepare, prepare. A trial is like a theater production: an attorney’s job is to put the case together in the most compelling and understandable (although always truthful) way. This requires a lot of advance planning and preparation so that when you are in front of a jury, the case unfolds seamlessly and appears effortless and natural. It should look easy to the jury — but it’s definitely not.

My first priority when not at work is spending time with my family — I am blessed to have an energetic and spry 83-year-old mother, three endlessly surprising children, two lovely stepdaughters and four adorable stepgrandkids. Although I didn’t anticipate being a grandmother this young in life, I am enjoying every minute of it!

Slow down and enjoy the ride. Savor the moments of victory or satisfaction — both at work and at home.  As a young lawyer, I was so busy trying to raise three children and at the same time advance my career that I was always in a hurry to move on to the next challenge. I missed some chances to pause and enjoy my (admittedly chaotic) life, and I regret those missed opportunities now.

I’m actually a shy person.  Left to my own devices, I would prefer to write a brief than attend a social event!

Why do you make a point to do substantial pro bono work?

Pro bono work provides unique opportunities to contribute to the profession, mentor other attorneys, help people in need, and work on challenging matters. And, on top of all that, it is now mandatory in the Southern District, which is also very motivating!

That’s a hard question because I have had so many amazing opportunities over the years. However, Board of School Commissioners of City of Indianapolis v. Walpole, 801 N.E.2d 622 (Ind. 2004) — which involved the issue of whether discovery is required prior to a teacher termination hearing — ranks at the top of my list. One thing that was unusual about the case was that the Supreme Court accepted it as an emergency direct appeal from the trial court’s ruling; another was that the oral argument was held at the Indiana University Robert H. McKinney Law School. In addition to all the student attendees, both my parents came to watch the oral argument, which made it a special experience for me. And, in the end, the Supreme Court sided with our client, which made it professionally satisfying as well.

Change is happening at warp speed. The technology we use as lawyers is becoming increasingly sophisticated, and the data that we can harness to do our work (and to outperform our competitors) is expanding exponentially. As a result of these changes, how we do our work as lawyers will look very different in 10 years than it does now. And the challenge for all of us will be to stay on top on these changes so that we can continue to deliver the best results for our clients in the most efficient and cost-effective way.

Before I became a lawyer, I had a long (though not illustrious) career in food service — ranging from working in coffee shops, to waitressing at budget restaurants, to serving in fast food restaurants. My most memorable job was working at a McDonald’s in London, just opposite Hyde Park. In additional to having the experience of being a cultural minority (I was the only American working there), I also learned valuable life lessons from my co-workers, not the least of which was how to “skive” (British slang for getting out of work by faking an illness).

Believe it or not, when I first started practicing law, lawyers didn’t have computers. So, briefs were prepared with typewriters, there was no e-filing, and email was not even on the horizon. Obviously, the world is different now. And while many of the technological changes have been positive — I would far prefer to file a brief at midnight while sitting at my desk than making a mad dash to the post office to deliver a FedEx filing — some have complicated the practice of law. In particular, although email is a great communication tool, it also creates a 24/7 culture of responsiveness, which can be difficult to manage for lawyers and clients alike.

My father used to say that I became a lawyer so I could argue for a living — after spending my childhood arguing with him and my mother, I moved on to doing it for a career. I think there is some truth to this:  I am temperamentally suited to being a litigator. At the same time, the fact that my father was a lawyer was definitely influential in my career choice.

My father. After a short stint in private practice, he became a law professor and ultimately taught at the Indiana University Maurer School of Law for 58 years. Not only was he a distinguished professor, but he was a kind, fair and generous person who was beloved by students and colleagues alike. Although I can’t entirely live up to his example, I like to think that his spirit of fairness runs through my veins.

It’s a learning experience every day. I am continually learning from my colleagues, my clients, my adversaries, and from the law itself. I love the fact that each case is a different puzzle to be solved and I feel privileged that clients trust me to solve these puzzles for them.