Michael B. Cracraft has been a leader in utility law for years. While he’s no stranger to tax law and other complex litigation, he also has provided pro bono service for “Dreamers.” As a founder of Friends of White River in 1985, he took a leading role in advocating for protection of one of Indianapolis’ most vital natural resources. 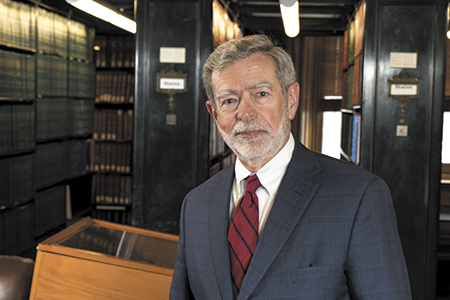 My father was an attorney and my younger brother was in the same law school class with me. My sister also became an attorney. I thought about becoming an oceanographer when I was a senior in college, but Indiana is too far away from the ocean and I had a family to support.

Early in my career as an associate attorney, a partner in the firm suggested that I work on a rate case for a gas utility that was about to be filed with the Public Service Commission of Indiana. That led to my interest in utility law and representation of that client and other utilities in rate and financing cases before the Commission.

Ten years is a very long time due to the rapidity of technological change in our country and around the world. I think use of technology and AI will continue apace. It is hard to tell now how the legal profession will change in the future, but it certainly will continue to change, and as long as Congress and state legislatures meet every year and pass laws, there should be work for lawyers interpreting laws and regulations. The delivery and pricing of legal services also will likely change from current models.

We used to use books for research and maintained paper in files. We prepared letters on fancy letterhead using IBM typewriters and mailed those letters through the U.S. Post Office. Then, along came word processors and WordPerfect and now Word. Today, nearly everyone carries a powerful computer in the form of a smartphone. As a result, we are almost always connected to the office and accessible to clients. Virtually everything we do in the practice of law is in one form or another electronic with computers, smartphones, emails and text messages.

Robert D. Morgan, a name partner in Smith Morgan & Ryan, where I began my law practice. He was a great lawyer and a pleasure to work with. He emphasized integrity in the practice and mentored me, especially with the importance of legal writing.

Longtime relationships with clients and assisting them in solving their legal problems.

What got you hooked on fly fishing?

I have always loved fishing. However, many years ago, when my grandmother passed away, I asked one of my law firm colleagues if he could help with the estate. He liked to hunt and did some fishing. I researched fly fishing in a catalog in order to get him a rod and reel. In the course of learning about fly fishing, I bought an outfit for myself, joined the Indianapolis Flycasters and became addicted to the sport. I tie my own flies and use them as often as I can. Fly fishing provides some exercise, and helps me get away from computers and the phone.

Aside from fly fishing, what do you most enjoy doing when you’re not in the office?

Spending quality time with my spouse, children and four granddaughters.

Make more time for the family.

I will get back to you on that one.