Kathleen Delaney has won high-profile damages awards, but she’s also been a strong advocate for civil rights. She grew up with prominent lawyer parents with whom she continues to practice. She’s also active with her law school alma mater, the Heartland Pro Bono Council, and Dress for Success, which helps empower women to be economically independent. 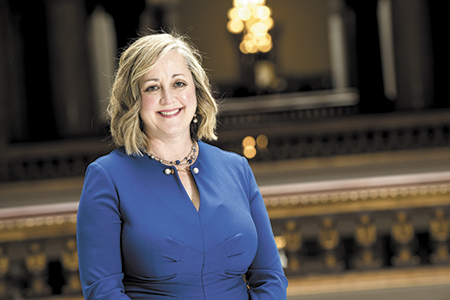 Emily Herx v. Diocese of Ft. Wayne-South Bend has been my most memorable case thus far. I represented a Catholic schoolteacher who was fired for undergoing in vitro fertilization with her husband. Shortly after we filed the case, “The Today Show” flew Emily and Brian Herx and me to New York City for one of Ann Curry’s final interviews. At a jury trial a few years later, I cross-examined a bishop, a vicar general and a monsignor. The jury returned a large dollar verdict in favor of my client. As a lifelong practicing Catholic, I was relieved to avoid getting struck by lightning.

What sparked your interest in handling civil rights cases?

My first exposure to civil rights cases was as a law clerk to Judge David F. Hamilton, then on the United States District Court for the Southern District of Indiana. Judge Hamilton taught me the important role that civil rights cases play in safeguarding our constitutional rights. Early in my private practice career, I was appointed as pro bono counsel in a Fourth Amendment case to handle a jury trial before Judge John Daniel Tinder. I will always treasure the heartfelt expression of gratitude that my client communicated to me after the jury returned a sizeable verdict in her favor following a hotly contested trial. That experience really solidified my interest.

Technology will cause litigators to rethink how we can best communicate with jurors during the trial process. I also think that we will have fewer lawyers practicing law, especially in courtroom litigation. I also suspect that the economics of large firm practice will continue to present challenges.

When I first became a lawyer, email and cellphones were novel developments. As a large firm associate, I dictated briefs and letters for transcription. Now my office is paperless (and has been for several years).  Technology has changed dramatically and so have client expectations about accessibility and responsiveness.

I served as a foreign service officer for the U.S. Department of State posted to the American Embassy in London. The bulk of my time was spent interviewing applicants for non-immigrant visas. I had a few memorable in-person applicants, including British actors Sean Connery and Jeremy Irons. I was also fortunate to have a temporary duty assignment as the chief economic/political officer at the American Embassy in Dublin.

I knew from a very young age that I wanted to be a lawyer. Both of my parents were successful lawyers who loved their work and talked about it at the dinner table. I attended my first law school class as a preschooler sitting in the back of my father’s contracts class with coloring books and crayons.

My parents, Ann and Ed DeLaney, along with Judge David F. Hamilton, Justice Frank Sullivan, Jr. and Bill Moreau have each steadfastly encouraged me and mentored me. Judge V. Sue Shields has been an inspirational mentor and a true trailblazer. She presided with great patience at my first jury trial to go to verdict. After the verdict was rendered, she took the time to interview jurors with the lawyers present, which was truly an educational experience.

I have truly enjoyed building my own firm over the past 16 years. Helping clients solve problems and training young lawyers to interview witnesses, take depositions, and try cases have been highlights.

Why is pro bono work important to you?

Pro bono work has afforded me significant opportunities to help people who genuinely need help, while at the same time broadening my substantive legal experience.

I like to play tennis, do Pilates (reformer) and walk for exercise. I do the New York Times crossword most days. I enjoy spending time with my family, which now includes frequent trips to visit my children at their respective schools.

Don’t be afraid to take risks.

I once lived at No. 1 Abbey Road in London with the famous Beatles “Abbey Road” album cover crosswalk visible from my living room.•