John L. Krauss may have a greater understanding of Indianapolis and central Indiana than just about anyone. As founding director of the Indiana University Public Policy Institute, he’s helped study a variety of issues important to the region, assisting more than 150 local and state entities understand the ramifications of their policy and funding choices. He served as a deputy mayor under former Indianapolis Mayor Bill Hudnut during a career in public service in which he served five Indiana governors and four Indianapolis mayors. In addition, Krauss serves in numerous academic capacities at IUPUI and as a mediator and arbitrator at Krauss Group LLC. 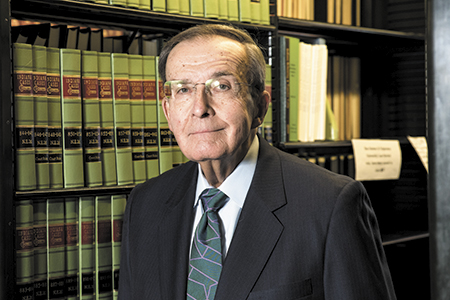 Mayor Richard Lugar appointed me executive director of the Greater Indianapolis Progress Committee in 1973 — a scary, but wonderful opportunity for a 25-year-old. I arrived just after GIPC led the charge to draft the legislation and support UNIGOV. Task forces worked on creating Eagle Creek Park, raising local money to build the first convention center, addressing aging and drug abuse, housing, downtown redevelopment and supporting construction of a new sports arena. The efforts of hundreds of civic leaders laid the foundation for a new competitive Indianapolis.

You’ve been involved in great changes in Indianapolis, but which of them means the most to you?

Seeing Indianapolis evolve from a sleepy Midwestern city into an energetic community with a sense of itself and its potential. Our community came to understand that through collective efforts, we could drive our future agenda. Who would have thought we would have a football team, let alone host a Super Bowl? Or that a new tech and bioscience industry could grow in a town where other traditional industries had left or declined? Or that a company like Amazon would include Indy on its short list for a new headquarters? My grandfather used to say, “What’s the biggest room in your house? The room for improvement.” We accomplish these things as a community. It has been rewarding to be part of the change.

In college I became intrigued by government systems and tools for economic development. That led to a Ford Foundation grant to live in the District of Columbia while writing a thesis on federal-state relations. I came back to Indianapolis, applied to law school, and am glad I chose McKinney Law. The rest is history.

Charles Whistler, who was then a partner at Baker and Daniels. Both Lugar and (Mayor Bill) Hudnut called on Chuck to solve community problems or pursue opportunities. I watched as Chuck galvanized developers and citizens into planning a future for downtown together. Chuck had the amazing ability to patiently listen to divergent positions. He then would sum up what he heard, brilliantly weaving all the small needs and agendas into a larger plan for action. People saw their smaller piece would be part of something bigger. I learned from Chuck that lawyers have two missions for their clients: to create opportunities and to solve problems.

Teaching over 1,500 law students, lawyers and judges to be mediators, including federal district judges, trial and appellate judges, a U.S. senator, mayors, members of the General Assembly and a timber negotiator. Helping them understand the skills they need to apply to negotiate or solve problems. It’s rewarding to me when a lawyer or judge walks up to me and says “I took your class, and I applied things you taught me in my last negotiation. Glad I took the course.”

Photography. I try to find the unusual within the usual.

Try new things. Get experience. You will be able to better figure out what you want to do and not do.

What’s your advice to someone who wants to pursue a career in legal education?

Understand what you want to do with your education. Do you want to practice? Or, is law a good foundation for other things? Have a plan, be flexible, take internships, clerk. Get practical experience during law school.

One of my photographs was published as a half page photo in the Travel Section of the Sunday New York Times. 2.5 million people saw the photo.

When I was deputy mayor, employees of a local grocery store went on strike. Some 2,000 people were looking toward a bleak holiday season. Both sides asked Mayor Hudnut to intercede. Hudnut asked me to join him to talk to both sides in a private session. He opened the meeting saying it would be good for all to understand each other and work things out. He then announced that he would be available by phone, but I would participate. That was news to me. I sat there trying to figure out what just happened. I had never done formal mediation before, though I had worked with groups to build consensus. One side marched off to another room. I marched after them. Back and forth I went between the two sides. We talked, they caucused, folks wanted to leave, but didn’t. Around 2 a.m. we finally got some traction, and around 3 a.m., I called the mayor to say we had a tentative settlement. Bleary-eyed, I sat next to him at the press conference that morning as he said it was great “we” got a settlement. I learned a lot and I think that case led me to a career in alternative dispute resolution.

The goal to solve problems and create opportunities will not change, but the way we do it will change drastically. I think we will see different types of practice. Several states are now granting limited law licenses. Simply put, they are the legal equivalent of a nurse practitioner in the medical field, someone who can do a prescribed set of duties. Technology will play a bigger role. Muti-jurisdictional practice will be common.

Change is all around. It must be our friend, not foe. We now practice with a minimum of paper. Forensic electronic discovery has replaced the stacks of stuffed banker’s boxes in the hallway. We must understand privacy, security and cloud-based storage. Even with the increase of email and texting, we cannot forget the power and value of face-to-face communication.•