Joseph O’Connor has risen to leadership positions in the Indiana State and American bar associations from his Bloomington office, where he’s had a distinguished practice for 40 years. He’s remained active with his alma mater and the broader Bloomington community, working on public health, access to justice issues and criminal justice initiatives, to name a few. 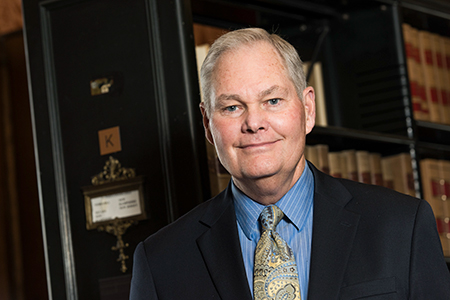 When I was a sophomore at Purdue, I was contemplating changing majors from math to chemistry. I had a wonderful counselor who helped me see that I would probably be better suited for a job where I had more involvement with people and their issues. He suggested law school as a possibility. No one in my family was a lawyer, but going to law school sounded like a good next step to take. I received my degree in mathematics but enrolled in law school with no real commitment that I was going to be a lawyer. However, I fell in love with the work and the challenge and with the continuous opportunities to help people solve problems.

I was fortunate to get the opportunity to join one of the top small law firms in Indiana right here in Bloomington. I really had no intention of remaining in Bloomington after law school (I figured I would end up back in my hometown of Chicago), but the chance to be in a college town worked well for me, a city boy, and my wife, who was from a small southern Indiana community. Most importantly, the firm I joined here at that time (and with which I have practiced for almost 40 years now) included some of the best lawyers in the state, and I had several mentors in the firm who helped form my early career.

Helping people and guiding them through problems and assisting in getting the best solution possible for those problems, whether as their lawyer, or now more often as a mediator.

You’ve been actively involved in bar organizations through your career. What do you get from that involvement?

My professional association involvement has provided me with the opportunity to work to improve the legal profession, and also to get to meet and befriend wonderful people who also happen to be top attorneys all across the state of Indiana and indeed the country. I have greatly enjoyed the chances I have received to help better the profession and to promote the rule of law through those involvements.

How important is it for you to stay active at your alma mater, IU Maurer School of Law?

I have been extremely grateful to IU Maurer for the education and career direction I received and feel compelled to help make sure those same opportunities exist for the next generations of lawyers.

When I am not working you can often find me on the golf course. We also enjoy traveling both here (my wife and I have been to all 50 states) and some abroad. And I am always reading, usually a novel but sometimes a biography.

I was a caddie master one summer while in college at the country club west of Chicago where I caddied growing up. That was an interesting job and required development of diplomatic skills when dealing with the members and the kids who came each day to caddy.

As a trial lawyer, don’t take too much credit when you win a case, or too much blame if you lose — the facts and the law usually are the biggest factors.

Hmm, I am kind of an open book. I can’t come up with anything, but if I do I will let you know.

There have been many. A story I like to tell is of a Seventh Circuit argument regarding an appeal from a case my client had prevailed on in the Southern District Court. This was the third time I was to be arguing in the Seventh Circuit in Chicago, and I prepared assiduously. As the day came closer I continued my preparation with excitement and trepidation. The big day arrived.  My opponent as appellant went first, and every aspect of his argument and brief was cut to shreds by the senior judge on the panel. It was then my turn, and the judge stopped me before I could start. He asked, “Are you going to try to talk me out of any of this?” I swallowed and said “No, Your honor.” “Is there anything else you want to say to us?” he asked brusquely. I was primed, prepared and ready to follow up on each aspect of the judge’s attack, and it took every bit of my will power to say again, “No, your honor.” “We’re finished,” he then pronounced. Of course, the decision went my client’s way, but I was still disappointed about not getting to make the presentation I had worked so hard to prepare.

Wow, that is a big question. There will be more avenues available for people to get legal information and even advice other than the traditional consultation with a lawyer. However, that person-to-person contact will, I believe, still be an important part of the practice.

Certainly. The biggest change has been the ubiquity of the use of mediation to settle disputes. We had virtually no discussion of ADR or mediation when I was in law school, and I practiced more than 10 years before ADR became a viable part of our dispute resolution mechanisms. I have now taught the mediation class for 10 years at the law school here, and firmly believe that all students with any litigation-related career ambitions should become as familiar as possible with mediation, even in law school. The profession also has made strides so that its makeup is more reflective of society in general, with as many women becoming lawyers (like my daughter) as men, though we still have a way to go to keep the profession as representative as the lawyers age.•