Steven Schultz knows about building bridges. He was involved in completing the years-long project to build two spans across the Ohio River, connecting Indiana and Louisville, Kentucky. He also facilitated Mitch Daniels’ transition into Indiana’s governor’s office in 2005, and as general counsel under Daniels at Purdue University, recently guided completion of the school’s acquisition of Kaplan University. 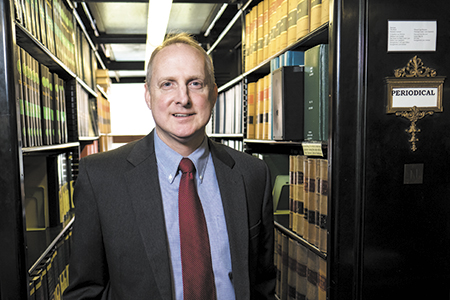 I probably have at least one vivid memory from each deal or project I’ve worked on. The three weeks I spent holed up in the law library over the winter holiday of 2004-05 stand out. Mitch Daniels had run for governor on an agenda of about 70 or so specific reforms, and some were slated for immediate action. On joining the transition team, I got my first assignment: research and draft 18 executive orders and have them ready by the first of the year. So, my family headed to Disney World, and I got to work. I recall putting the finishing touches on the authority for Indiana’s new Office of Management and Budget as the ball dropped on New Year’s Eve.

Getting such great opportunities in a wide range of sectors and areas of the law. Whether it’s been M&A and securities work in private practice, government service, or in-house experience in financial services and higher ed, I’ve been blessed by the sheer variety of my assignments and the marvelous relationships I’ve been able to build along the way.

Golfing, cycling, reading military history and binge-watching the latest TV series. (Just got through all episodes of “Black Mirror,” the “Twilight Zone” of our age.)

What are some of the unique challenges that come with representing an institution such as Purdue?

The size and complexity of the enterprise, for one. When I arrived five years ago, a colleague compared the work at Purdue to running a small city, and he was right. The range of issues on which we provide advice and counsel is very wide, which requires a good eye for issue-spotting and the ability to deliver risk-based advice in real time. I’ve begun sharing with aspiring law students that, if you’re looking for a career that will expose you to one of the broadest practice portfolios imaginable, you need to consider higher ed. Purdue’s penchant for doing innovative things also tends to create its own special brand of work opportunities, whether it’s acquiring an online university or being at the forefront of income share agreements, a new type of financial instrument that helps our students pay for college.

Be bold in seeking out and getting advice from mentors.

As the young “gofer” on Gov. Bob Orr’s staff, I walked out with him, carrying a couple of boxes of his personal effects, as he departed the Statehouse for the last time in January 1989. Sixteen years later, almost to the day, I walked back in with Governor Daniels as he arrived after his inauguration.

What was it like to see the opening of two bridges linking Indiana and Kentucky after working for years on that project?

Really an indescribable feeling. There was a palpable sense of history at both ribbon-cuttings, and each occasion was like an “old home day” reunion of sorts with friends and colleagues from both sides of the river who had worked so hard make the bridges a reality. It’s kind of surreal to drive across them now, particularly when they seemed so out of reach a few short years ago.

It’s difficult to predict the pace and trajectory of technological change in the digital age, but that’s bound to continue to have a huge impact. I think this will increasingly manifest itself in how legal services are delivered and in how our legal system copes with uncertainty, as norms and rules struggle to keep up with what is possible through technology.

It’s much faster paced, as technology has proved to be both a blessing and a curse. As a young business lawyer, I often had to race the clock to meet the last FedEx shipment from Indianapolis Monument Circle, just so I could get deal documents distributed for a conference call the next day. Email made that sort of thing easier, but it ended up increasing work pressures by raising expectations about response times.

You mean besides appearing as the Noble Roman’s Pizza Monster at a few store openings in 1984?  It was probably working as an administrative assistant in Governor Orr’s office after graduating from Butler in 1988. The decision to defer law school to take that job, and the friendships I made through it, changed the entire course of my life.

It was around the fourth grade, when I played Abe Lincoln in the school play. The day I got the role, I complained to my mom that I only had one line: the Gettysburg Address. It was the bicentennial year, and the task of memorizing that masterpiece fueled my already strong interest in American history and politics. Many of the biographies I read were about lawyers, so I set my sights on becoming one at around that time.

It would be hard to overstate the importance of my mentors, from the wonderful teachers and coaches I had to the attorneys from whom I learned so much. Some are among the list of past Distinguished Barrister honorees. My most important lessons, though, were taught by my parents. From my mom, who never met a stranger, I learned the value of finding common ground in every interaction — a very effective approach for both networking and negotiations. From my dad, who was also my high school coach, I learned the importance of always doing your best. His motto: “If better is even possible, good is not enough.”•