Before Jack Walkey ever set foot in court, he’d made quite a name for himself on other courts around Indiana as starting guard for the 1964 state championship Lafayette Jefferson High School Bronchos. His real estate and estate planning practice clients praise his winning personality, skilled counsel and friendship, as well as his community service. As one said, “Jack is always there for all of us.” Walkey served more than 25 years as a member of the Lafayette Police Civil Service Commission, served on the Lafayette City Council, and has been active in the Community Foundation of Lafayette, local chapters of the American Heart Association, American Cancer Society, YMCA and others. He’s also been an active continuing legal education presenter. 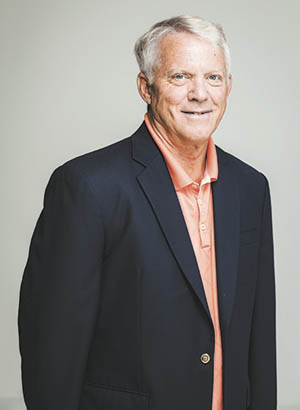 I have had many, but the most memorable involved a client (unnamed, of course) who I did not know much about. After some discussion, he planned to make a substantial gift of some 80,000 shares in a large, publicly traded company to a trust for two of the client’s children. As we approached the day to make the transfer of stock to the bank as trustee, I suggested to the client that he might want to go to the bank a little early. He asked why. I told him “so you can sign all of (I assumed the MANY) stock certificates.” He chuckled and said, “There is only one certificate to sign.” He had one certificate that included not only the shares that he transferred to the trust, but many, many more!

As corny as it may seem, much of the reward or satisfaction comes from successfully solving the problems or issues that clients came to see me about. I am reminded of the Indiana University law professor who, when asked to describe the “practice of law,” said that it is problem solving. He said that clients do not really care what “the law” is. They only want you to solve their problem. That is so true. You may need to research the law and apply the facts. But, the clients really do not want to learn “the law” — whether it is a statute, precedent or the construction or interpretation of the contract that they signed (before they contacted you).

I really enjoy playing golf with friends. Frankly, my golfing buddies roll their eyes when someone asks, “Do you get to play much golf?”

What was it like to be a starter of the 1964 state champion Lafayette Jefferson High School basketball team?

It was a great experience. I was fortunate to attend a school with a great coach in Marion Crawley (he had won three state championships, two at Washington and one at Jeff, and he had already been inducted in the Indiana Basketball Hall of Fame), a long-time assistant coach (Sam Lyboult), with a “feeder system” with loyal teacher/coaches in ten elementary schools and two junior high schools who taught only man-to-man defense, with a great basketball tradition (an intimidating but impressive girl’s block section with 250 to 300 girls in red sweaters and a boys section of 250 to 300 all at one end of the gym at every game) in a city that loved its high school basketball (perhaps more than Purdue basketball at that time), with several other good local teams (West Lafayette and Central Catholic). The year before, with four juniors and one senior, in the semi state at Purdue’s Lambert Fieldhouse, we upset a Rich Mason-led East Chicago Washington in overtime and went to the Final Four/State Finals. We lost to a Muncie Central team in the afternoon 73-71 (we lost a starter to an injury in the first quarter) that won the Championship that night. The next year, with four starters returning, the team and entire community expected great things. Ranked either No. 1 or 2 in the state all year, we lost only one game in the regular season (to Tipton in Jeff’s own Holiday Tournament). In our own sectional championship game, we had a very close game with West Lafayette, rolled through the regionals at Purdue, and then played two strong teams in Gary Tolleston and Valparaiso in the semistate at Purdue. At the end of the season, we were ranked No. 2 in the state behind No. 1 Columbus. Both teams reached the State Finals and expected to play in the championship game. But Columbus was upset by Huntington in overtime in the afternoon. In a game where both teams were saddled with foul trouble, my Lafayette Jeff team beat Huntington in the championship game, a game in which we committed only two errors. We celebrated with a motorcade around Monument Circle that night and a ride on a fire engine through the streets of Lafayette the next day witnessed by an estimated 10,000 people and a celebration before a completely full (stands and floor) gym. More than 50 years have passed now. Before class basketball. Only one team won its last game! The school newspaper headline on the following Monday read: WE DOOD IT! The headline had significance because Lafayette Jeff had been to the Final Four SIX times since we had last won the State Championship in 1948!

I was introduced to the practice of law by Jack King, the assistant coach of my American Legion baseball team. He told me about his practice and encouraged me to think about being an attorney. He took me to lunch with his partners and he would describe what he was doing. As I was considering a major in college, he suggested that a degree in business would give me a good background for an attorney in a general practice. I set a goal of going to law school. Jack King and I kept in touch during my four years of college and I joined him for lunch on my school vacations and in the summer. After my first year of law school, I clerked for his firm. It was from the clerking experience that I really knew that I would enjoy the practice of law, notwithstanding the fact that I did not enjoy law school. The second and third years of law school were like an endurance contest, something that I needed to endure to be able to become a lawyer and practice law.

Upon joining the same firm that I had clerked for two summers and while studying for the bar exam, Owen Crook, a retired local judge joined our firm as “of counsel.” He took me under his wing. He would give me a file and tell me what “his” client needed. Then, he would give me some ideas on what research that I would need to do. Then, he and I discussed my research and discussed some possible solutions. While he guided me, he truly wanted to help me solve the client’s problem. He was never too busy. He died after only a couple years with our firm. But, his wife told us that he so enjoyed his short time in our firm.

Why is important for you to do CLEs on real estate, estate planning, and other areas of practice?

I have found that the more that I learn about various areas of the practice, the more that I realize that I do not know about that area. For example, I often can be heard to say, “while many residential real estate transactions are the same, each one is different.” In each transaction, there is something different that challenges you to resolve in the case. And, as I attend a CLE session, I am always looking for some new idea, a new or amended statute, a new case, a possible alternative solution to a common situation. Sometimes that idea comes from the material, sometimes from the lecture, sometimes from the question and answer session, sometimes from a discussion with another attendee over lunch or during the break. I sometimes go up and ask the speaker a question about a particular fact situation that I have in one of my cases.

Two things. First, when reviewing a “standard” contract, rather than delete a provision because I did not know what it meant, leave it in the document unless you are certain it is not needed. I have found that in many instances the provision that I was going to delete was actually a provision that benefitted or protected my client. Secondly, always, always look for a good, basic CLE class or source material on the subject matter to learn the basics.

My wife and I have 15 grandchildren (each of whom presents a different challenge for their parents to raise). I also enjoy fishing.

I worry that the legal profession will no longer be counselors. He/she will give in to the pressure to provide instant answers rather than sound, well-researched solutions. Quality work product will become extinct.•