Thomas M. Zurek came to Indianapolis in 2002, making a sizeable splash when he joined OneAmerica Financial Partners. Since then, the company’s assets under administration has grown from $12 billion to more than $80 billion. Before moving to Indiana, Zurek served as corporate counsel and in private practice in Texas and Iowa in a prolific career that’s included more than 150 jury trials, securities, finance and reinsurance arbitrations. Zurek also is active in his community, supporting the Assistance League of Indianapolis, which targets specific needs such as providing clothing to underprivileged students or victims of sexual assault. He also volunteers with Gleaners Food Bank and serves on OneAmerica’s Foundation Board, which during his time with the company has provided charitable grants to United Way of more than $9.5 million. 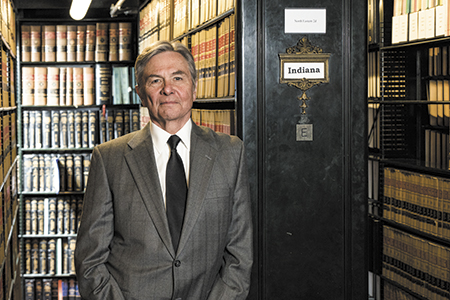 I believe that the private practice will become more and more specialized. Generalists will tend to find a home with businesses and utilize specialists in law firms to fill in gaps of knowledge and experience.

I started practice 44 years ago — at the beginning we used carbon paper and white out. We saw the beginning of the technology generation when we got our first “Mag Card” devices. Everything changed in terms of volume and accuracy with word processing, internet communications and database research.  The speed of practice is several orders of magnitude greater now than in 1974. We communicate instantly, we create arguments and insights with the increased velocity — this leap in necessary response capability has created a need for lawyers to know much more in a much quicker environment.  Basic skills as a lawyer are tested constantly — learned skills are tested always. I practiced law as a trial lawyer for 26 years — precision is the byword for the evolution on that side of the business. During the last 18 years I have been general counsel of very large financial services companies — all my basic skills are always tested — new skills have become necessary to do my job. This evolution has been exciting and challenging. It has been a great time to be a lawyer.

A colleague favorably compared you to the Energizer bunny. Where do you find that energy?

The challenge of being a lawyer has never left me — I love it every day. When you are stimulated by your profession there is no problem getting ready for the new adventures you encounter daily. I have also been very mindful of my physical wellbeing — I have worked out almost every day for the last 40 years.

I always suspected that I would end up as a lawyer. I was drafted out of college and realized that I needed to fulfill my assumed destiny and go to law school after I was on active duty. I truly had no idea what I was getting myself into, but it ended up being a profession I was suited for — as I have said, I have appreciated every day that I have been a lawyer.

I had a law professor who was also a noted civil trial lawyer. He helped me get into law school after my active duty time in the military. (Getting in to law school was not a sure thing for me.) This professor helped me see the beauty of the art of trial practice. In his later years, I worked with him trying several matters when his physical skills dictated that he need some help. He taught me the elegance of civil procedure and the importance of sincerity and honesty with juries.

The obvious things were jury victories and losses. You always learn from both, and you are better because of both. In the last 18 years as a general counsel, I have had the pleasure of guiding companies to much greater results than had been achieved before I joined them. Most importantly, I have helped young lawyers actualize their potential and become great lawyers and counselors.

Planning what my next career in the law will be. Also running, cooking, playing poor golf and, most importantly, being able to spend time with my wife, children and grandchildren.

Why is it important to you to volunteer and provide community service?

Early in my career I spent a lot of time representing church, nonprofits and legal aid. These duties satisfied my obligation as a lawyer to my community — these activities need to be a driving force for all of us. It is not about professional or monetary success (which are important, but not the end). It is about the special skill and responsibility we all have as lawyers to take our gifts and skills and help make our world better. In recent years, I have been honored to participate in several quasi-public state boards.  These boards have been fulfilling because I have been able to provide skills that create a better environment for a broader range of citizens than simply those served by my church, nonprofits, clients and employers.

Relax. If you dedicate your energies to preparation you don’t have to worry about the result, it usually always works out.

I am planning my next career after I retire from OneAmerica.

I tried or managed 15 nationwide class actions from the mid ‘90s to the present. There were several large wins, several large settlements but no verdict losses, but always challenges and the fun of being a lawyer doing important work.

Working as an apprentice lithographer for my father’s company in Chicago.•