Kathleen Casey has devoted her career to public defense, and now she’s helping lead efforts to examine and propose changes to improve Indiana’s public defender system. These efforts could impact thousands of Hoosiers’ lives for decades to come. She also is a strong advocate for restoration of lost driving privileges and for immigration reform. 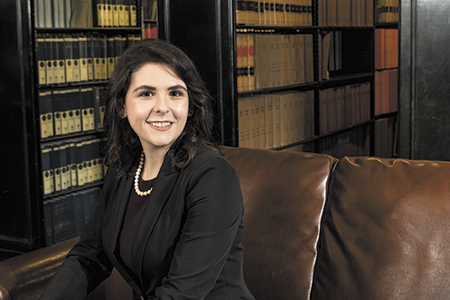 When you were pursuing your law degree, did you have a career in public service in mind?

I went to law school after spending time in college as a newspaper reporter for the Fort Wayne News-Sentinel. I believe that reporting on issues can be a great catalyst for change, but I wanted a more hands-on approach, and so I applied for law school.

I come from a very practical family — my mother is a nurse, my father an engineer, both of my siblings are paramedics. Our most important family value is defined by the good you do for your community in very practical ways. I can’t exactly pinpoint the exact time when I decided I wanted to be a lawyer, but sometime towards the end of college I realized that I was also a very practical person, and it was through law I could provide value to my community and bring about social good.

My very first supervisor as a young public defender, Michael Moore, helped me to gain confidence as I was struggling to establish myself as an attorney and as an adult post-law school. I learned from him the value of staying calm amid chaos, and to let things roll off your back. He taught me to rely less on my notes and to think on my feet. To this day I often think about what Mike would do when facing a difficult situation.

The most rewarding part of my practice is also the most exhausting, but I love that I get to go to work every day and try to make Indiana a better place through public defense reform. I was recently reading a report from 1974 and I realized that many of the problems from 45 years ago are still problems that we are struggling with in our modern court system today. I’ve begun to realize that it takes the concerted effort of thousands of people to move the system toward more justice, and I’m trying to do my part.

I absolutely love cooking! It’s a great stress reliever, and my meal prep Sundays are a ritual that I look forward to every weekend.

If there’s one thing I’ve learned thus far in my life, it’s that life tends to throw plans out the window. However, I know that I will still be working to better my community, and I hope to still be surrounded by great friends, family and food.

This is a difficult question, because I tend to be an open book (ask anyone who knows me). However, not many people know I have a collection of musical records from around the world — traditional calypso, highlife and bossa nova among many different musical traditions. It’s always a tropical vacation when the record player is on at my house.

My most memorable case is not actually from my time as a public defender but from my time now as staff attorney for the Public Defender Commission. I organized the Indianapolis Listening Tour for the Indiana Task Force on Public Defense. I was able to witness several passionate public defenders, my former colleagues, come forward to speak to the members of the Task Force, which include a retired federal judge, a Supreme Court justice, and members of the legislature among others, and offer incredible and timely recommendations for reform. It was a powerful moment that demonstrates to me that public defenders can be effective agents for change.

You’re described as a passionate advocate for immigration reform. What fuels that passion?

My passion for immigration reform comes from my personal experience with my partner’s journey through the immigration process. It’s easy to forget how complex the immigration system is if you’ve had no interactions with it, but it affects people in our community every day, and we should come together to make reasonable reforms to the system.

There is set to be a huge generational change in the law within the next decade, as many of the people who helped make our system what it is today retire. Lawyers coming of age today face an entirely different landscape — technology is automating many tasks that previously were handled by an attorney, and nearly everyone I know has the albatross of student loan debt to consider. I think that technology along with the cost of legal education will force a rethinking of how we are training our young lawyers and what they are doing once they have their degree. There will always be a need for lawyers, but exactly how we practice law will change dramatically.

My most memorable job before being an attorney was certainly my time as a journalist in my hometown of Fort Wayne. I got to meet so many different people, and I gained an appreciation for learning the history of a city — it shows you how many of today’s problems arise from issues we didn’t want to face in the past.

If you hadn’t pursued a legal career, what would you be doing instead?

If I hadn’t pursued a legal career, I think I would be in the hospitality industry, running a small hotel by the ocean. I still might do that someday!•