Ann McCready has an impressive history of complex commercial and insurance litigation and leadership at Taft and at her prior firm, Tressler LLP, in Chicago. She’s active in the Integrating Woman Leaders Foundation and serves on the Young Professionals Advisory Board of Children’s Bureau, Inc., which supports and assists at-risk children and their families. 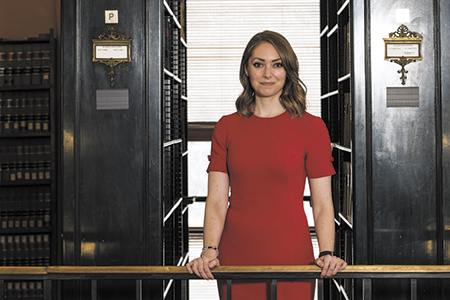 Prior to law school, I worked for a strategic communications firm, APCO Worldwide, in Washington, D.C. As a journalism major in college, I initially thought I was headed toward a career as a journalist, but I was drawn toward the relationships between the media and corporations. This led me to APCO, where I primarily worked in the firm’s litigation communication practice group. We focused on representing clients who were facing large-scale litigation, which obviously has significant public relations ramifications — we monitored media coverage of the lawsuits and managed all of the dealings with the reporters covering the cases. I spent my time assisting our client’s trial teams as they prepared for and tried high-profile cases, and the work was challenging and fast-paced. In the end, however, I realized I was more interested in what was happening inside the courtroom, which led me to apply for law school.

While at APCO, I also got to work on other fun matters, such as the World Wrestling Entertainment’s “Smackdown Your Vote!” youth voter outreach program, and I worked with United Airlines as it lobbied the Department of Transportation for — and was awarded — a route between D.C. and Beijing.

If you hadn’t pursued a legal career, what would you be doing instead?

I likely would have remained in my career in public relations, as I enjoyed the work immensely. The job was different every single day, which is a lot like what I do now — our first task was to understand the issue or challenge the client was facing, which was always unique, and then we had to develop a solution or strategy to assist the client in reaching the desired outcome. That is similar in many ways to my practice, and it was fulfilling in many of the same ways.

Not to disparage our fellow Midwesterners in Chicago, but I find the legal community a bit friendlier and more collegial in Indianapolis. I think much of that stems from the fact that Indianapolis is a smaller community, and in the litigation realm, you’re bound to come across the same attorneys in multiple cases (not to mention at all of the same bar association events around the city). I think this facilitates a stronger sense of professional courtesy throughout the profession, and that carries through to the practice itself where Indianapolis attorneys invariably treat one another with civility and respect.

I was certain I would not become a lawyer for a very long time. My father is an attorney in Bloomington where I grew up, and — despite our many similarities — I was convinced that was not the path for me. However, in my first job in public relations, I found myself repeatedly drawn to our clients who were facing litigation and legal challenges (and therefore needed assistance with the related reputational issues), and that work was the most interesting to me by far. I was at a trial in Atlantic City that was incredibly contentious and had been garnering significant media interest when I realized I was much more interested in the actual legal proceedings than in drafting press releases summarizing those proceedings. I count that experience as invaluable, as it gave me a front row seat to the legal world, and between my work experience and my life spent listening to my dad telling war stories from his own practice, I felt like I started law school with a bit of insider information about the profession I was getting myself into.

I have been fortunate to have a number of mentors in my life who have taken the time to invest in my career and advocate for my success, and I have been particularly lucky to work with many women in leadership positions who have served as role models for me. However, the most obvious answer to this question is that my dad inspired my decision to embark on a legal career, and he has also inspired me through his incredible and lifelong commitment to the profession. Through his example, he taught me that being a lawyer isn’t just a job, it’s being a member of the profession itself and contributing to that profession in a meaningful way. That’s a commitment I take very seriously in my own career.

I find it most rewarding when I am able to identify and implement a creative solution to an issue a client is facing that previously seemed insurmountable. I think it’s easy to lose sight of the fact that clients are not always accustomed to navigating the legal world (particularly when it comes to litigation), and what might just be another case for us can be intimidating and all-consuming for the client. As a litigator, I enjoy taking on that challenge and leaving the client free to focus on their day-to-day business.

Tell us about your work with Integrating Woman Leaders.

I think it is important to balance my involvement in legal organizations and bar associations with organizations that are entirely unaffiliated with the law. In Chicago, I focused on the organization Women Employed, which advocates for workplace fairness and opportunities for working women. Here, I have had the opportunity to get involved with Integrating Woman Leaders Foundation, where I serve on the planning committee for IWL’s Indianapolis Women’s Leadership Conference. IWL exists to develop individual women into leaders through empowerment, support and connections, and that speaks to a particular passion of mine.

I enjoy reading. (I usually have at least two books going — one old fashioned book at home, and one audio book for my commute.) I like to travel whenever I have the opportunity. On the weekends, my husband and I can usually be found on the Monon or in Holliday Park walking our dog, and I spend a lot of (very) early mornings at various group fitness classes.

In college I was the president of GW’s chapter of the Jackie Robinson Society. On somewhat of a whim, I took a sociology class called Jackie Robinson: Race, Sports, and the American Dream, which explores Jackie Robinson’s role in integrating major league baseball and the resulting impact on both sports and American society. That class sparked my interest in the group, which facilitated discussions and community service projects furthering Jackie Robinson’s legacy and exploring the intersection between race, sports and society.

I have had several cases that have gone up to the Seventh Circuit on appeal, and most recently I had a case go up on appeal to the Sixth Circuit. Given the time-consuming nature of appeals, those are always memorable. However, the Sixth Circuit appeal was particularly memorable because I was working with a partner from Taft’s Cincinnati office, John Nalbandian, who was named to the Sixth Circuit by President Trump just two days before we were set to argue our case. To add to the experience, our opposing counsel was Paul Clement, former solicitor general of the United States. I won’t soon forget those oral arguments.

I think the legal profession has been a bit slow to catch up with the rest of the working world — law firms are now looking at making more technological advances to keep pace with how young professionals approach their careers, and I think it will be incredibly interesting to see how the legal profession adapts. The litigation practice group at Taft has formed a task force that I’m involved with that is currently looking at how the profession is changing and to look at ways our practice group and our firm can stay on the cutting edge over the next 10 to 20 years. I think greater flexibility to ensure that the younger generation of lawyers can work the way they want to work — that is, on their own time table, rather than chained to their office for all hours of the day — will be one of the keys to this success. In particular, firms are finding it more difficult to keep women among their ranks long enough to make it to equity partnership and to leadership positions, and I think the legal profession is starting to see that it needs greater adaptability to ensure good attorneys want to stay at law firms, rather than looking for alternatives. Law firms also need to compete with the disruptive models of entities like LegalZoom, which is a challenge that has been getting a lot of attention recently — I think that in particular will force law firms to think creatively about their own models (something that does not always come naturally in the legal profession). I look forward to being part of this change at my firm, as we have already come up with many creative ideas about how to approach this changing landscape.•