Home » IndyBar: Singing Speedo-Men, the Protection of Our Laws and that Lee Greenwood Song

As I write this, it’s the Fourth of July, and I’m fulfilling my patriotic duty by listening to that Lee Greenwood song on repeat. And with Mr. Greenwood providing my soundtrack, I open the newspaper to find that immigration is once again in the news.

I have now lived slightly over half of my life as an American citizen, but my immigration story is far less heroic than the ones in the paper, and my path to citizenship was even simpler: in August of 1995, I traveled to Atlanta to slide some paperwork under a windowless door. When that door opened, I met with the woman behind the desk who conducted an oral exam. I was asked three questions: 1) Had I ever smuggled drugs? (No); (2) who was our Vice President? (Al Gore); and 3) what are the three branches of government? (You know that one.)

The woman behind the desk then approved my application and instructed me to return to Atlanta in two months for a swearing-in ceremony. I asked her if I could get sworn in now because in two months, I would be in the middle of my college semester. She laughed, shook my hand and helped me find the other side of the windowless door.

So in October of 1995, I skipped Financial Accounting (which was fine), missed swim practice (which was a no-no) and drove from my rural Indiana college to Indianapolis where I caught an empty Delta flight. I spent a lonely night in Atlanta (watching the Braves on TV not win a World Series), I somehow figured out the MARTA in the morning and made it to some non-descript federal building in time for a ceremony. Once in the building, I entered a half-full auditorium, took a seat and looked around.

The room was lifeless. There was nothing on the beige walls. At the center of the room was a tiny stage complete with dim yellow lighting, an American flag and a podium. It was early. Everyone’s eyes seemed tired. I was ready to get this formality over with.

Eventually some sort of immigration official walked on stage. He had a moustache and a toupee and looked like Ned Flanders in the flesh. Ned swore us in and then gave a spiraling speech that thanked the group repeatedly for coming to the country the “legal way.” Ned was excited, but the crowd wasn’t. After Ned pounded the podium for the third time to no response, he mercifully closed his remarks and invited us after the ceremony to come on stage, one by one, to get a picture with him and the flag. I rolled my eyes. I was out of there, and I was certain that the rest of the room was coming with me.

So with the ceremony over, I picked up my bag and started for the door when I noticed I was alone. I looked over my shoulder and watched new Americans of every background approach the stage and shake Ned’s hand. None could contain his or her smile. One woman draped the flag over her shoulder. One man even hugged Ned and wept on his shoulder. I started to feel I should get my picture taken, but then I looked at the length of the line and left for the subway.

I haven’t forgiven myself for that day. Not because I didn’t get a picture with Ned, but because I didn’t pause to think about how hard some work to become an American. I hadn’t taken a second to think about what my parents had sacrificed or who they left behind to come to this country. I failed to give a single thought as to what it might have been like for me to grow up in Northern Ireland in the 1970s during the Troubles. While becoming an American citizen was a big achievement for me, I hadn’t worked for it. It was handed to me, and I didn’t stop to thank a single person.

When I arrived in Greencastle later that day, I ran to the Lilly Center because I was late for swim practice and I thought Coach Cohen would be more than irritated. You see, swimming is a self-inflicted punishment with no ball or strategy to keep things interesting. The only thing a swimmer feels is pain, and Coach wanted us to experience this pain as an entire team. 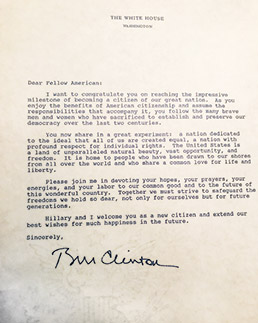 Because I was late, I made the strategic decision to run on deck in street clothes to ring the bell that I was there earlier than I would have been if I had taken the four minutes to change. When I arrived on deck, Coach did two things I had never seen before: 1) he acted somewhat happy to see me and 2) he stopped practice to do something other than yell at us. When he stopped practice, he ordered 26 soaking wet men to “welcome the USA’s newest citizen.” My teammates then gave me a round of applause and then one by one turned to the flag by the scoreboard and sang “The Star Spangled Banner” in my honor.

Now if you are into singing men in Speedos, this would’ve been up your alley. (You know who you are.) And although these guys acted like they were joking, they sang every word with their right hands over their hearts and they did it in the freezing cold. Deep down, I believe they were serious because they knew that my becoming a citizen was a big deal. I had failed to appreciate the magnitude of the moment. The DePauw swim team had not.

Coach gave me the practice off and I sat next to him on a bench while the team swam the remaining sets. I told him about the trip, showed him my new Certificate of Naturalization and my form letter from President Clinton in which he addressed me as a “Fellow American.”

Now, if you’ll excuse me, I have some Lee Greenwood to listen to.•