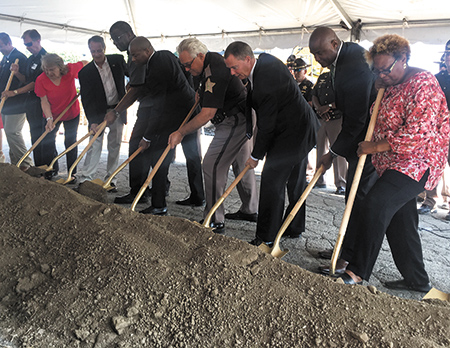 The ceremonial groundbreaking of the new Marion County Criminal Justice Center was more than the symbolic start of construction, Indianapolis City-County Council President Vop Osili said — it was the start of the city taking a groundbreaking step toward criminal justice reform.

Osili joined Indianapolis Mayor Joe Hogsett, Marion County Sheriff John Layton and other law enforcement officials and city and community leaders at the site of the former Citizens Gas and Coke Utility plant in the Twin Aire neighborhood on the morning of July 12 to mark the beginning of the construction of the multi-functional campus. When completed, the complex will be home to a new Marion County jail and courthouse, as well as an assessment and intervention center designed to assist offenders with mental illness.

“Folks, this is a dream,” Layton said to a crowd that also included elected city and state leaders.

Once completed, the new Marion County jail will open as the sixth jail the county has used, Layton said. Calling the current jail, which has been operational since 1967, a “fossil,” Layton said the new facility will utilize modern technology to make its operations more efficient and cost-effective.

Speaking to reporters after the ceremony, Layton said the new jail will also be designed so that it can be easily expanded, if necessary. However, he said the goal of the criminal justice complex is to reduce jail overcrowding and recidivism by focusing on inmate treatment, rather than punishment.

Hogsett expressed a similar sentiment, telling ceremony attendees that the campus will “open the door” to justice and treatment opportunities for inmates struggling with mental illnesses. He estimated that 30 to 40 percent of the people involved with the Marion County criminal justice center suffer from such illnesses. To that end, he told reporters that the idea of the campus is that mentally ill offenders will not stay at the center for long, but instead will be placed into wraparound social services that will “stop the revolving door of justice.”

“What we seek is a criminal justice system that saves more lives than it detains,” Hogsett said to a round of applause.

The groundbreaking on the 140-acre site along Prospect Street marked the beginning of the first phase of development, which will include construction of the building pads and utility corridors for the jail and courthouse, Hogsett’s office said. The Marion County courts voted earlier this year to move their operations into the new courthouse, a change that will end the longstanding practice of highly specialized court “silos.”

The City-County Council unanimously approved the funding for the acquisition of the former Citizens Gas plant and the initial construction work, a trend Hogsett said he hopes will continue as the city continues work on the project that is expected to cost more than $570 million. He told reporters that one of the main issues former Mayor Greg Ballard encountered when he tried to develop a criminal justice complex were “deep partisan divisions” on the council, but said he hoped the bipartisan support of his criminal justice project will continue.

Construction on the Marion County Criminal Justice Center is expected to be completed in 2021 or 2022. As Hogsett, Layton and others prepared to ceremonially shovel the site’s first pile of dirt, the mayor had a simple message to launch the process: “Let us begin.”•