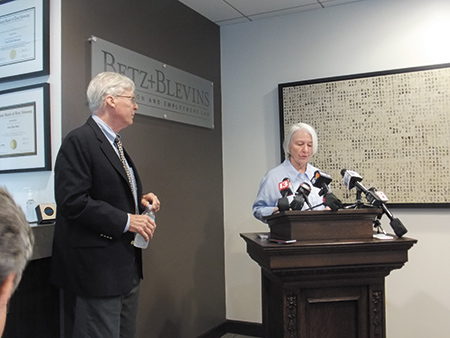 For Indiana Attorney General Curtis Hill, the quiet that accompanied the arrival of August was likely a welcomed relief.

His office issued press releases announcing his support for the Trump administration’s energy policy and calling for safeguards on elections. Perhaps, more importantly, his name was gone from headlines spotlighting allegations of sexual misconduct.

However, the tranquil days may be just a respite. The investigation by the Indiana Inspector General’s Office continues, and Daniel Sigler, a senior prosecuting attorney from Fort Wayne, has been appointed as special prosecutor to determine if criminal charges should be filed against the state’s top lawyer.

Four women, including Democratic State Rep. Mara Candelaria Reardon, have accused Hill of making unwanted sexual advances — including allegations he groped some of them — at a party after the end of the 2018 legislative session. Hill has strongly denied the women’s claims, openly questioning their motives. He has hired Voyles Vaiana Lukemeyer Baldwin & Webb to represent him in any potential criminal matter and Betz & Blevins to represent him in a possible defamation lawsuit.

“A litany of inconsistencies and contradictions have plagued the accusations against Curtis Hill,” Chezem said. “But to expect a person to respond to moving targets of accusations of undefined bad behavior toward other unnamed persons is simply not fair … .”

The formation of a 501(c)(3) to collect contributions brought a fresh round of inquiry. Nonprofit law attorneys questioned the legality of starting a charity to raise money for one specific person and how the fund would be monitored in Indiana.

Under state statute, the Indiana attorney general is the watchdog over nonprofits operating in the state. The Indiana Supreme Court affirmed that authority in Zoeller v. East Chicago Second Century Inc., 904 N.E. 2d 213 (2009), finding the office of the state’s attorney has the authority conferred by common law and statute to “protect the public interest in charitable and benevolent instrumentalities … .”

Hill’s office did not respond to a question asking how the attorney general’s office will address the possible conflict of interest and ensure an objective investigation if a complaint is lodged against the Fairness for Curtis Hill organization.

Bopp did not see any problem. He said Hill is not a part of the organization, and if a complaint is filed, the attorney general can recuse himself from the investigation.

Another nonprofit Bopp founded was the subject of a complaint about five years ago. The Citizens for Responsibility and Ethics in Washington filed a whistleblower complaint in 2013 with the Internal Revenue Service and the Indiana Attorney General against Bopp, his law firm and the 501(c)3 he had created, the James Madison Center for Free Speech. The group alleged Bopp was diverting funds from the Center to his law firm for personal enrichment. Bopp said he was exonerated.

The Fairness nonprofit has filed a certificate of incorporation with the Indiana Secretary of State. Eventually, it will have to file a Form 10-23 with the IRS to enable donors to get a tax deduction for their contributions. Bopp said the organization has not filed the form and has 27 months to do so.

Phil Purcell, adjunct faculty member at the Indiana University Maurer School of Law and Lilly School of Philanthropy, said the approval rate of new nonprofits has been “pretty liberal” at the IRS. Still, the charity for Hill might have difficulty qualifying.

A nonprofit organized under 501(c)3 requirements must serve a charitable class, rather than a single individual. But as Purcell and Zachary Kester, executive director and managing attorney at Charitable Allies, pointed out, the Fairness organization raises concerns because Hill seems to be singled out as a beneficiary.

The announcement of the new charity described it as being “launched to defend the constitutional rights of public officials and other persons, accused of misconduct, to due process and equal protection of the laws and to serve as a legal defense fund for Curtis Hill.”

In that, Kester sees a potential workaround. He gave the example of charities that are founded whenever a police officer or firefighter dies in the line of duty. The individual’s death started the nonprofit and the contributions helped the surviving family, but the charity may stay open and continue to collect money for the next unfortunate death of a first responder.

Even so, Kester is skeptical of the Fairness nonprofit and whether it adheres to the prohibitions against private inurement and benefit.

Bopp stood by the mission of the organization, saying it will be used for the legal defense of Hill and to advocate for fairness.

“We think everybody will benefit from our advocacy, but we’re focused on this problem,” he said. “Do you think this will be the last public official convicted by accusation?”

At the July 23 press conference, Chezem challenged the accusations that Hill groped the women. She said under Indiana law, touching another person is not inappropriate behavior unless it is rude, angry or insolent. Without more, touching by itself is not sexual assault or harassment.

She also pointed to differences between what some of the women told the legislators who initially investigated the allegations and the statements they made to the press.

“Curtis Hill responded to these allegations the only way he could: he denied inappropriate behavior, and the accusations have become a moving target,” Chezem said.

Both Bopp and Chezem said no taxpayer money would be used to defend Hill against the accusations. Asked why the attorney general needed a nonprofit to pay his legal bill, Chezem replied, “If you are someone who didn’t do something you are accused of, you’d probably need a legal defense fund far more than if you’d actually done what you’re accused of.”•