“Christopher Robin” is a tiny little film filled with great significance. The talented Ewan McGregor plays Christopher, and he has all but lost the joy in life despite having a loving wife (Hayley Atwell) and daughter (Bronte Carmichael). Unfortunately, he works for an employer who considers weekends a waste of time if you’re not in the office.

Christopher’s wife and child leave for a planned trip to the country while he remains assigned to a job to find a way to increase profits by discharging valuable employees and friends. Filled with angst, who should show up at his doorstep other than Winnie the Pooh? 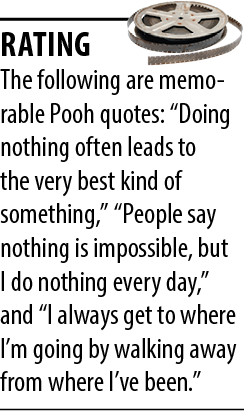 When Christopher is confronted by his old pal, his reflections immediately go back to his experience as a child in the Hundred Acre Wood. In fact, the movie begins with a throwback to a time when you see the interaction between a young boy, Pooh Bear, Eeyore (a very funny Brad Garrett), Piglet, Rabbit and Owl.

As I watched a very moving party where the animals were saying goodbye to Christopher as he left for school, I couldn’t help but be reminded of those heartbreaking moments when you have to say goodbye to a pet who has died. That happened in our house two weeks ago when one of our rescue spuds, Mario Pucci, succumbed to cancer. I still keep his food bowl in his empty cage to remind me of his wonderful contributions to our home.

Quite frankly, nothing happens in this film that wasn’t totally expected, and it really doesn’t matter. As noted above, Pooh is filled with many wonderful quotes about finding joy in life from doing simple things, and Christopher regains the enthusiasm of his childhood that he had lost along the way.

I saw this movie at a perfect time given that I had just returned from southern Indiana following a long session with a young client and his family. He suffers from Asperger’s Syndrome and is charged with a serious offense following his construction and discharge of an explosive device in his home. Devastated after breaking up with his girlfriend and no longer being able to see her children, whom he adored, he is accused of making that explosive to somehow threaten her.

It is a complicated case that carries enormous consequences, and I was trying to convince the family to negotiate a resolution that was in their son’s best interest. Tears flowed right up to the point where I got back in my car to drive to Indianapolis.

Once back in Marion County, I couldn’t bear to remain in my office for over half an hour, and as a result I took off seeking an escape. There waiting for me was Christopher Robin and Winnie the Pooh, and I once again found magic waiting for me in a dark theater.

Spike Lee’s “BlacKkKlansman” is a powerful film on multiple levels. Taking place in the 1970s, it tells the true story of Ron Stallworth, the first black police officer in Colorado Springs whose dedication leads him to infiltrating the Ku Klux Klan. Supported by a soundtrack that adds to the emotional power of the film, director Lee shines his camera on the underbelly of life in our country that has significant meaning to this very day.

John David Washington, the son of Denzel, gives an Oscar-worthy performance as Officer Stallworth, a dedicated professional who fights racism in his office and on the street. In the process, he is assigned to go undercover on a college campus where Stokely Carmichael (Corey Hawkins), then known as Kwame Ture, is giving a speech to a group of largely black students and supporters. Trying to determine if the man who popularized the phrase “Black Power” is fomenting violence, Stallworth begins a charming personal relationship with Patrice Dumas, wonderfully played by Laura Harrier, the president of the Black Student Union at Colorado College. 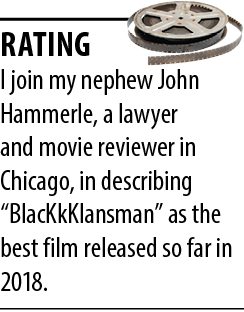 Stallworth’s imaginative drive leads him to beginning phone conversations with a representative of the Klan that results in actual communication with Klan leader David Duke (Topher Grace). His racist exchanges with these hateful characters are so incredibly vile that it will leave you as stunned in your seat as his fellow officers who were listening at their nearby desks.

In the process, Stallworth arranges a meeting with the Klan, where the very talented Adam Driver becomes his alter ego. In a sense, this moment reminded me of “Sorry to Bother You,” where a black man had to use his white voice to succeed in business. Driver, who recently displayed his admirable talents as Kylo Ren in “Star Wars: The Last Jedi,” keeps you riveted as he infiltrates the Klan, developing a relationship with members played with contemptable force by Jasper Pääkkönen, Ryan Eggold and Paul Walter Houser. Houser finds a way to bring a bit of humor to an otherwise detestable human being in much the same style as he did playing Tonya Harding’s bodyguard in last year’s “I, Tonya.”

What makes this film so mesmerizing is the bold manner in which Lee exposes the reality of racism in a country known as the “Land of the Free and Home of the Brave.” He boldly shows a clip from “Gone with the Wind” (1939) where Confederate soldiers were honored in a gigantic scene showing thousands of them lying wounded near a railroad yard in Atlanta under a torn Confederate flag. He follows it up with daring clips from D.W. Griffith’s “Birth of a Nation” (1915), a startlingly racist film that was honored at the time by President Woodrow Wilson and that painted black slaves as interested in little more than assaulting and raping white women.

But Lee doesn’t stop there. Harry Belafonte will take your breath away playing an elderly man (he is actually 90) who addresses a small group with a horrifying experience from his childhood where a friend was brutally tortured, mutilated and hung by a white crowd. He then shines his camera with deserving contempt on our president for finding fault on both sides of last year’s tragedy at Charlottesville, where white nationalists attacked a group of protestors, resulting in one young woman dying after a car intentionally slammed into a crowd.

As the film concluded with many members of the audience clapping, I had to stay in my seat for a moment, overcome with the reality that racism is alive and well throughout our land. While I have come to know a lot of great police officers over the years that I truly admire, the black citizens in Colorado Springs that you see beaten and attacked by various police officers were simply a reflection of what is taking place from Baltimore to Chicago to Los Angeles.

That is precisely why I proudly support NFL players who want to quietly take a knee during the national anthem. Sure, our white president hates that, but so do nearly all of the NFL owners, who are also white. Additionally, while the Civil War brought an end to forcing African-Americans to pick cotton on plantations, nearly 75 percent of all football and basketball players on a college and pro level are black, while the stands in each stadium are over 90 percent white. Like it or not, the great bulk of those condemning kneeling before a game are motivated by the singular desire to have the players shut up and entertain us. In many ways, it resembles watching captives battle to the death in the Roman Colosseum centuries ago.

I want to end by referring to the fact that while our president and his supporters urge NFL players to attack racial injustice off the field, look at how LeBron James was smeared for doing that very thing. With one of our president’s most vocal supporters being the Klan’s David Duke, all of you should see this movie and be reminded how we should be concerned about the direction our country is taking.•

Robert Hammerle practices criminal law in Indianapolis. When he is not in the courtroom or the office, Bob can likely be found at one of his favorite movie theaters watching and preparing to review the latest films. To read more of his reviews, visit www.bigmouthbobs.com. The opinions expressed are those of the author.