Home » Turning brownfields into green land neither cheap nor easy

A 20-year-old state environmental law, oblique court decisions and a provision inserted seven years ago into the statute of limitations are coming together in a case from Elkhart that many environmental lawyers are hoping will finally settle lingering debates over when suits recouping cleanup costs may be filed.

The city of Elkhart Redevelopment Commission sued the now-defunct Elkhart Foundry & Machine, Inc., seeking to recover the cost of cleaning up the company’s property. Central to the dispute is the claim brought by the city under Indiana’s Environmental Legal Action statute, which allows plaintiffs to recoup remediation expenses from those responsible for the contamination.

Elkhart learned in 2007 the foundry’s property, located near downtown along the Elkhart River, was a stew of toxins. Three years later the redevelopment commission purchased the land for $1 million. After doing some cleanup, the commission realized decontaminating the site would cost much more. So, in early 2016, the commission sued the foundry.

In response, the foundry argued the ELA claim came too late because the statute is subject to the six-year statute of limitations. The clock began running, the foundry argued, when Elkhart discovered the contamination back in 2007. It waited more than eight years to sue and was, thus, time-barred by Indiana Code section 34-11-2-7.

But Elkhart pointed to I.C. section 34-11-2-11.5, arguing the 2011 law that created subsection 11.5 established a 10-year statute of limitations for ELA claims and provided that the clock only begins running after cleanup costs are incurred. Because the commission did not start rehabilitation until the site was purchased in 2010, the city says the lawsuit was not time-barred.

Following the Elkhart Superior Court ruling in favor of the commission on the ELA claim, the foundry appealed, and the Indiana Court of Appeals heard oral argument Aug. 21. Environmental lawyers are watching and anticipating that whatever the decision, the dispute will go before the Indiana Supreme Court.

Matthew Neumann, an associate at Krieg DeVault LLP, noted the ELA and the statute of limitations question have long been roiling the legal community. A “fair amount of ink has been spilled on this issue,” and the attorneys litigating the court cases and offering commentary comprise a “who’s who of the environmental bar,” he said.

The legislation that created subsection 11.5 was in response to confusion in the courts over the Environmental Legal Action statute. While some of the rulings came after the subsection was enacted, the complaints were filed before the subsection was signed into law and were, therefore, not subject to the new law.

Now, Elkhart Foundry & Machine, Inc. v. City of Elkhart Redevelopment Commission, 20A03-1709-CT-02136, appears poised to give the appellate courts a chance to look at the ELA in light of subsection 11.5.

“This may be the case where it all finally gets resolved,” Neumann said.

The Environmental Legal Action statute was created to promote rehabilitation of toxic sites while protecting taxpayers from having to pay. Instead, the party responsible for contamination would be responsible for the cleanup costs.

However, the statute did not contain any language about a timeframe for filing a complaint. Attorneys then started looking to the courts for guidance as to the statute of limitations and when the clock started running.

The 7th Circuit Court of Appeals even rendered its view in Bernstein, et al. v. Bankert, et al. 702 F.3rd 964 (7th Cir. 2012). Finding the claim was not for property damage, the federal panel held the trigger for filing was pulled when the cleanup began, and the 10-year statute of limitations applied.

In an amicus brief filed with the Court of Appeals, Accelerate Indiana Municipalities and Indiana Municipal Lawyers Association, Inc. argue Senate Enroll Act 346, which created subsection 11.5, is clear. The 2011 law, the organizations say, established a 10-year statute of limitations for ELA claims, and those claims accrue when the plaintiff starts incurring cleanup costs.

Larry Kane, partner at Bingham Greenebaum Doll LLP, takes a slightly different view. To him, subsection 11.5 does not set a hard time bar, but rather limits the amount of costs that can be recovered for remediation.

That view is similar to the one offered by Dan McInerny, partner at Bose McKinney & Evans LLP, in his March 2013 article for “Res Gestae,” “The ELA Statute of limitations: Has the issue really been resolved?” Since subsection 11.5 does not contain any specific language about filing deadlines, McInerny reads the provision as setting a 10-year limit for recovering expenses, but not altering the time limit for filing as set by caselaw.

To Kane, subsection 11.5 does function as a kind of statute of limitations, because plaintiffs have an incentive to file earlier so they can recoup more of the money they paid for the decontamination work. Even so, a municipality or other entity could wait 20 years into a remediation project before submitting an ELA complaint. The lawsuit would not be time-barred, but the party would only stand to get reimbursed for the previous 10 years of costs rather than the full two decades. 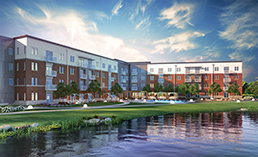 This rendering of the Stonewater at the Riverwalk property depicts the purpose of the Environmental Legal Action statute: to give new life to former industrial sites. (IL photo/Eric Learned)

The Elkhart Foundry was an iron foundry operating on roughly seven acres nestled near the bend of the Elkhart River a few blocks from Main Street. After the facility closed in 2004 and subsequently vacated the property, an environmental assessment later showed it left behind harmful substances such as arsenic, lead and chromium.

An attempt to lure the Elkhart Public Library to build a new main branch on the land was scuttled by the amount of cleanup needed. Consequently, the Elkhart Redevelopment Commission purchased the lot and started remediation.

Despite an extensive city cleanup, developer Flaherty & Collins Properties still did its own environmental preparation. The property construction and management company covered the ground with another layer of dirt to create a barrier between the original soil and the new buildings, according to Brian Prince II, vice president of development.

Construction has since begun on the roughly $35 million mixed-use development dubbed Stonewater at the Riverwalk. Prince explained the land is becoming home to more than 200 apartments, along with townhouses and 6,500 square feet of retail space, which fits the city’s desire for housing and amenities that will attract professionals to live in Elkhart.

From Kane’s vantage point, developments such as Stonewater demonstrate the goal of the ELA. He said the purpose of the statute is to create an incentive to remediate contaminated property by enabling the city or town to recover the cost from the party responsible for the damage. The ELA’s focus is on the cost of remediation rather than on the injury to property, which is typically bound by a six-year statute of limitations.

George Plews, partner at Plews Shadley Racher & Braun, agreed the ELA is about cost recovery. “To interpret it any other way is a tremendous blow to the purpose of the statute,” he said.

Properties can be heavily contaminated, but cities and towns have a duty, Plews said, to reclaim toxic sites in order to keep people safe from harmful chemicals and spur economic development on the site. Even so, municipalities cannot always immediately begin the rehabilitation of every brownfield because they usually need time to determine the extent of the harm and to begin the remediation.

With the intent of the ELA being to shift the cost of the cleanup from the taxpayers to those responsible for the contamination, Plews does not see subsection 11.5 as presenting a hard time limit. Echoing Kane, he said the subsection only caps the amount of remediation costs that can be recouped. Municipalities filing an ELA claim would be limited to getting reimbursed for the previous 10 years plus all the expenses going forward.

Plews is surprised at the confusion. He was one of the attorneys involved in the Bernstein lawsuit that went to the circuit court. The parties involved in that case did not see eye-to-eye on any of the issues, he recalled, but they all agreed subsection 11.5 provided the answer.

“I didn’t recognize 11.5 as being unsettled at all,” Plews said. “I thought it had been resolved by the passing of the statute.”•