“Crazy Rich Asians,” directed in Oscar-worthy style by Jon M. Chu, is the best romantic comedy to hit the big screen in a long, long time. The movie tells a rich story that involves multiple layers of emotional interaction, and it reminds me of classic films such as “The Philadelphia Story” (1940), “Mrs. Miniver” (1942) and “The Best Years of Our Lives” (1946).

There is not one weak performance in the all-Asian cast. Opening with one of the funniest scenes you will ever see involving racial discrimination toward Asians in London in the 1990s, it flashes forward to modern times where a young economics professor in New York agrees to accompany her boyfriend to Singapore to attend his best friend’s wedding. Not realizing her lover comes from an extraordinarily wealthy family whose mother is demanding his return to the Far East, the story explodes into a series of encounters that charmed everyone in the theater.

Constance Wu gives a captivating performance as Rachel Chu, the Asian-American who is venturing to Singapore for the first time. Henry Golding is equally compelling as the eye-catching boyfriend, Nick Young, and his ability to sustain his commitment to his girlfriend will be challenged by his demanding mother.

Every performance in this film is memorable, but let me start with Michelle Yeoh as Nick’s mother Eleanor. Strong-willed and focused on controlling her massive businesses and family, this is a role that has an Oscar nomination written all over it. Despite her commitment to ending the relationship between her son and Rachel, you end up admiring her for her dedication to Asian principles having little meaning in the western world.

And while you are likely to remember the performances of Nico Santos, Ken Jeong and Gemma Chan, let me just point out the charming performance of Awkwafina. She plays Peik Lin Goh, the only member of the extended wedding group that befriends Rachel. While she stood out in the recent “Oceans 8,” she is fantastic here as a very funny, profane woman who wants to help Rachel survive her ordeal.

But what helped make this film a great movie was the soundtrack. While you all know I cry easily in films, many of you will fight back tears as you listen to “Can’t Help Falling in Love” being sung by a young woman at the wedding ceremony (Elvis Presley originally released it in 1961). It was enchanting to look into the eyes of the bride as she walked down a long aisle that contained running water.

Let me close by pointing out the beauty of Singapore, where this movie was filmed. Mo and I spent time there following a cruise along the coast of Vietnam, and it is one of the most beautiful cities in the world. Though it was not referred to in the film, you will notice there was no trash on any of the streets. That has a lot to do with a local ordinance that forbids the use of chewing gum or spitting in public.

This film is a living reminder that falling in love is an act of nature frequently beyond our control. Regardless, it remains one of life’s greatest rewards.

“Alpha” is an intriguing little movie many of you will unfortunately miss. Taking place 20,000 years ago, it tells the story of how humans discovered the heartwarming value of pets. 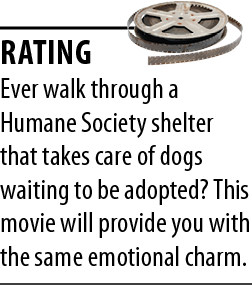 Kodi Smit-McPhee plays Keda, a teenage boy going on his first hunting trip with a group led by his father (Jóhannes Haukur Jóhannesson). Thought to have died in an accident where he fell over a steep cliff, Keda is left on his own to find his way back to his village while nursing a badly injured ankle. In the process, he battles a group of hungry wolves and ends up providing medical care for one of the injured critters. As boy and beast struggle with their connection to each other, a friendship forms as you watch them battle marauding animals and the onset of an Arctic winter.

While the cinematography is one of the strengths of this little film, be prepared for the fact that you are only able to understand the minimal dialogue through the use of subtitles. Interestingly, this serves to strengthen the movie’s historical meaning, as I don’t think there is any proof that Neanderthals spoke English.

Any of you who have pets will love this film. As noted, the movie focuses on what appears to be the origins of what we call man’s best friend. As I have said before, Mo and I have five rescue dogs and one cat at home. They are all tiny little creatures, and three of them sleep in our bed. I was reminded of the warmth they provide while watching the wolf crawl up and sleep next to Keda to keep him warm on a cold night.

What makes this film so enchanting is the performance of Smit-McPhee. While many of you will remember him from his role as Nightcrawler in the recent “X-Men: Apocalypse,” you really owe it to yourself to view his contributions in the tantalizing horror films “The Road” (2009) and “Let Me In” (2010). The first film is an apocalyptic drama where his father (Viggo Mortensen) takes him on a journey through cannibalistic humans to try to find a peaceful existence. “Let Me In” is one of the best vampire films ever made, where Smit-McPhee plays a young boy constantly bullied at school who ends up befriending a mysterious teenage girl (Chloë Grace Moretz) who moves into his apartment building with her “father” (Richard Jenkins) one night.

In the end, “Alpha” is really a poetic story on the meaning of human existence. We all struggle to find joy in life as each day passes with us growing closer to death. Few things add more pleasure to our journey than having a spud at your side.•

Robert Hammerle practices criminal law in Indianapolis. When he is not in the courtroom or the office, Bob can likely be found at one of his favorite movie theaters watching and preparing to review the latest films. To read more of his reviews, visit www.bigmouthbobs.com. The opinions expressed are those of the author.