Home » Hammerle On … “The Miseducation of Cameron Post,” “The Meg”

In light of the controversy at Roncalli High School in Indianapolis, “The Miseducation of Cameron Post” functions as a study on our country’s tragic approach to gay marriage. At Roncalli, the Archdiocese of Indianapolis has dictated the removal of a female counselor married to another woman due to a violation of church teachings, while this film centers on a teenage girl sent to a treatment center where she can be taught to reject her homosexuality.

The film takes place in 1993 when Cameron Post, a high school student, is caught in the backseat of a car in the arms of a prom queen. While it is obvious both girls care for each other deeply, Cameron is sent off to a remote Christian-oriented treatment center called God’s Promise where, along with a large number of other “gay inmates,” she can follow the lead of our Lord who only loves heterosexuals. 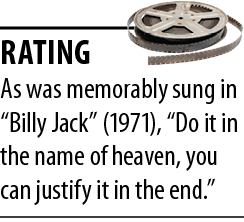 Chloë Grace Moretz gives an accomplished performance as Cameron, a teenager who simply can’t understand what is going on at the religious school. While she doesn’t want to challenge authority, she clearly is not ready to embrace a religious moral code that defies her full acceptance of who she is and how she got there.

Though Moretz is barely 20 years old, she is developing into an actress who refuses to be defined by any particular image. If there is any question, then watch her as a young vampire in “Let Me In” (2010).

While Jennifer Ehle and John Gallagher, Jr. give two hatefully engrossing performances as the leaders of the education center, Sasha Lane, Forrest Goodluck and Owen Campbell give rewarding performances as three of Cameron’s “inmate friends” who simply refuse to bend to the moral sword being dangled over their heads. I must note that Lane, here playing Jane, is an admitted gay actress who was unforgettable in “American Honey” (2016) and this year’s “Hearts Beat Loud.” While Goodluck finds a way to accept his daily misery with a sense of humor, you will never forget Campbell’s performance as the emotionally disturbed Mark, a teenager who takes a knife to himself to attempt to comply with the consequences of being gay.

As far as the controversy at Roncalli, the Catholic Church needs to address a doctrine that replaces love with hatred. Though women were finally allowed to vote in our country in the early 20th century, they still are rejected from the priesthood. Treated as religious second-class citizens, it is made worse by the fact that the Catholic Church has engaged in a diabolical cover-up of priests across the globe, including this country, who have sexually abused children for decades. How can the Archdiocese of Indianapolis condemn gay marriage while still refusing to publicly reveal the number of priests in the Marion County area who were identified as sexual predators?

Though I was raised Catholic in a small Indiana town, I rejected my religion long ago. Despite the many wonderful accomplishments of the Church, you only have to see the Oscar-winning film “Spotlight” (2015) to identify the contempt you have to swallow to remain a practicing Catholic.

It is time the Catholic Church accepted women as equal to men and started treating heterosexuals and homosexuals as being equal in the eyes of Jesus. The day of reckoning has arrived.

“The Meg” is an incredibly simplistic film that operates on a theme drawn from “Moby Dick” (1956) and “Jaws” (1975). Considered extinct eons ago, a giant shark known as Megalodon is unleashed from the ocean floor where Jonas Taylor (Jason Statham) is called upon to function as Gregory Peck’s Ahab.

Knowing ahead of time that I would likely find this film to be little more than ridiculous fluff, I decided to see it at the IMAX Theater at the extraordinary Indiana State Museum in downtown Indianapolis. Even if your worst experience in life was secretly filmed, it would be tolerable to watch it in that magnificent setting. 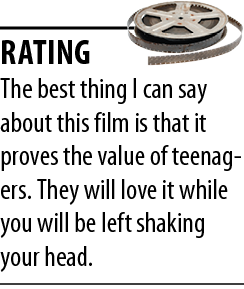 Such was the case with “The Meg.” To begin with, this movie was largely sponsored and filmed by Chinese theatrical interests. While sensing that it would likely die quickly in American theaters, it is clear they were counting on a big box office smash in their country. Yet it proved to be a box office hit here. Go figure.

Just as Matt Damon was recently used as little more than the pitchman in the recent Chinese spectacle “The Great Wall” (2016), Statham serves the same purpose in “The Meg.” An actor who has given thoroughly entertaining performances in films beginning with “Lock, Stock and Two Smoking Barrels” (1998), “Snatch” (2000), the “Transporter” films beginning in 2002 and the very funny “Spy” (2015), he repeatedly succeeds as an engaging villain with a spirit that you admire.

In “The Meg,” however, Statham’s Taylor does little more than repeatedly dive to ocean depths to save attractive trapped women, one of whom is his ex-wife. And while the film has some credible performances by Winston Chao as an oceanographer and Bingbing Li as his daughter with underwater skills, the film contains an absolutely wretched performance by Rainn Wilson, here playing a billionaire who was sponsoring the offshore exploration site that lost its bearings. While Wilson was supposed to be funny, he is borderline offensive in every scene. Spoiler alert: You will be gratified when the Megalodon devours him near the end of the film.

Let me end with one profound disappointment. While I was thankful to see the shark killed at the end of “Jaws,” I wish our Megalodon would have eaten all of the principal characters in this movie. I truly think that most of the adult audience members would have responded with the cheer, “Atta boy, shark. Atta boy.”•

• Robert Hammerle practices criminal law in Indianapolis. When he is not in the courtroom or the office, Bob can likely be found at one of his favorite movie theaters watching and preparing to review the latest films. To read more of his reviews, visit www.bigmouthbobs.com. The opinions expressed are those of the author.