“White Boy Rick,” directed by Yann Demange, is a movie made for those of us who have dedicated a lifetime to our role as criminal defense attorneys. Nearly every case involves some type of human tragedy, and you quickly learn that your client’s agony becomes your own.

Based on a true story and taking place in Detroit during the 1980s, “White Boy Rick” describes the struggle of a working-class family fighting to find some meaningful enjoyment in life. Richard Wershe, Sr., played memorably by Matthew McConaughey, is a single father who supports his two teenage children with a gun business out of his home. With his daughter Dawn a drug addict, his son Rick is forced by the FBI to become an informant, where he hopes to make a few bucks. 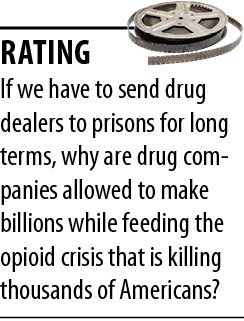 You will never forget the performance of Richie Merritt as the son soon known as White Boy Rick, who learns the cost of being an informant. He is soon targeted for retribution by his black drug friends after his FBI work is revealed, and he is left for dead after being shot in the stomach.

Though White Boy recovers with the requirement that he use a colostomy bag for the rest of his life, he and his dad soon decide that the only hope for any type of financial gain is to become drug dealers. Despite enjoying some success over a couple of years where he fathers a bi-racial daughter while helping his sister overcome her addiction, everything collapses with his arrest.

Facing life in prison, Rick succumbs to a federal agent’s request that he again become an informant. Without apologies, the police agents turn their back on him and he is eventually sentenced to life in prison at the age of 17.

What this movie demonstrates is the racial disparity of our criminal justice system where our jails become another form of a modern-day plantation system. In that sense, Rick was an exception where one set of laws apply to blacks while whites are treated far more favorably. The reality of this film is that a 17-year-old boy was sentenced to life in prison for a non-violent drug offense and no one, and I mean no one, in the judicial system remotely cared.

Matthew McConaughey’s father Richard learned the cost of being in society’s lower rung where he is left fighting to make a living. Helping to raise his son’s daughter, he repeatedly confronts the agents, played by Jennifer Jason Leigh, Rory Cochrane and Brian Tyree Henry, to honor their word after betraying his son. Though his son was sentenced in 1987, he was not paroled until 2017, three years after his father’s death. At that, you get the strong feeling that the parole only came when this movie was being made.

Bruce Dern delivers a small but caring performance as Ricky’s impoverished grandfather, and Bel Powley a jarring role as Ricky’s drug-addicted sister. On top of that, Jonathan Majors, YG, and RJ Cyler are also compelling as Johnny, Leo and Rudy Curry, three black drug dealers who are trying to find a way to prosper regardless of the risks.

Having practiced as a criminal defense attorney for more than 40 years, I have witnessed many of my own “White Boy Ricks” being sentenced to lengthy terms in prison. Though I am proud to say I have saved many, I will never forget the time in 1994 when I personally watched a client become the last Hoosier to die in the electric chair. That client’s name was Gregory Resnover, and even the two prosecutors who handled his trial joined our defense team in requesting that the death penalty be set aside because of the obvious errors made in the appellate process. But just like with White Boy, I watched Mr. Resnover literally burn to death as the smell of his scarred flesh filled the observation room.

I have a small card given to me from his prison cell shortly before his death which says, in part, “Words cannot begin to describe what the years of knowing you have meant to me so I won’t try. I am grateful to the Almighty Creator for permitting our paths to cross!”

While injustice continues to exist in this country, I have pledged to go to my grave fighting it. “White Boy Rick” and Gregory Resnover are reminders why.

While “Operation Finale” successfully recreates the work of Mossad, Israel’s intelligence agency, in capturing Adolf Eichmann in Argentina 15 years after the end of World War II, the film will rip your heart out as it recreates Eichmann’s leadership under Hitler that resulted in the Holocaust. Ten million humans were summarily executed, 6 million of them Jews, and it encompasses a horrific story that resonates to this very day.

How did Germany, a largely Christian nation, tolerate the slaughter of men, women and children? As noted in Daniel Jonah Goldhagen’s fantastic historical work “Hitler’s Willing Executioners,” the Holocaust happened only because ordinary Germans either participated in it or turned a blind eye. The importance of “Operation” is that it occasionally focuses on the execution of young mothers, fathers and their children in large pits where they were then buried as their executioners smiled and took pictures. 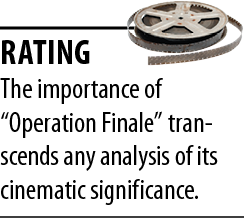 My brother and I visited the Dachau Concentration Camp while visiting Munich during the 1974 Octoberfest. While the museum on the property will suck the wind out of your lungs, it is hard to describe the emotional reaction of walking through one of the remaining wretched buildings where Jewish inmates were confined. After forcing ourselves to look at the crematoriums, my brother and I decided that the most rewarding part of our experience was asking a local town resident for directions to the facility after we left our train. While their relatives did nothing despite the smell of burnt human flesh hovering over their small city, at least they are forced to relive it every day with visitors like ourselves.

Though the bulk of “Operation” focuses on Mossad’s undercover work in Argentina as they plotted a way to kidnap Eichmann and have him flown secretly back to Israel for trial, the film’s gravitational power flows from Mossad agent Peter Malkin’s reflection on the death of his young sister and her children at the hands of the Nazis. The very talented Oscar Isaac helps define Malkin’s inconsolable heartbreak over the loss of his sister, and it serves to remind us all of the agony inflicted on Jews who survived the Nazi purge.

As I watched Ben Kingsley’s remarkable performance as Eichmann, I couldn’t help but reflect on the reality that the racism that made the Holocaust acceptable permeates our country whether we like to admit it or not. While Eichmann was a married man who clearly loved his wife and two children, he had no problem witnessing the killing of thousands of Jews before going home to dinner. Was that any different from the fact that our American ancestors in the Antebellum South sanctioned slavery for centuries while simultaneously picnicking with their families after going to church on Sunday where ministers used the Bible to justify their barbaric act?

Furthermore, thousands of black American citizens were hung and burned across our country while crowds watched and cheered. While many Americans today champion the importance of family, how is it that many of those same Americans accept the separation of Hispanic children from their parents on our southern border?

As you wrestle with Malkin’s attempt to find a way to say goodbye to his sister and find some peace in the world, tears will likely flow down your cheeks as they did mine. While drying your eyes, you have to remember that a Christian country supported the demonic force of Hitler that lead to the Holocaust. We cannot allow its poisonous germs to take root and prosper in our country.•

Robert Hammerle practices criminal law in Indianapolis. When he is not in the courtroom or the office, Bob can likely be found at one of his favorite movie theaters watching and preparing to review the latest films. To read more of his reviews, visit www.bigmouthbobs.com. Opinions expressed are those of the author.