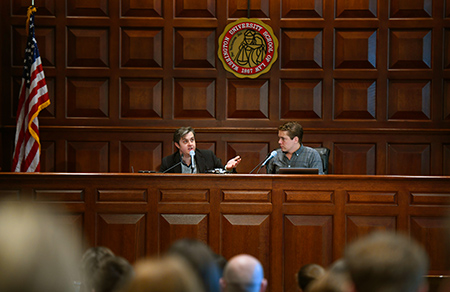 Originally wanting to create a podcast about the Supreme Court of the United States, Ian Samuel inadvertently proved, again, that timing is everything.

The first episode of First Mondays was launched by Samuel and his friend Daniel Epps on the first Monday in October 2016. Little more than a month later, Hillary Clinton lost the presidential race she had been expected to win, and since then President Donald Trump has opened a spigot of nominations to the federal bench, including two new justices for the Supreme Court.

Samuel, who recently joined Indiana University Maurer School of Law as an associate professor, and Epps, an associate professor at Washington University School of Law, give ample time to discussing the law, the cases before the Supreme Court and the oral arguments. But they have also become “unwitting pundits” who have had to cover and comment on contentious confirmation battles and allegations of sexual assault, Samuel said.

“Quite frankly, I think Dan and I both would have been a lot happier if Justice (Anthony) Kennedy had not retired,” Samuel said, referring to the vacancy created this past summer that led to the controversial confirmation of Brett Kavanaugh.

Even so, the podcast has gained a following. It makes a regular appearance on SCOTUSblog, and Eugene Volokh, creator of The Volokh Conspiracy blog, gave the show a “highly recommended” rating.

However, the attraction of First Mondays is not necessarily the blockbuster cases and the antics of the justices but the conversation and insight offered by Samuel, Epps and regular guest host Leah Litman, visiting clinical professor in the Supreme Court Litigation Clinic at Stanford Law School.

All are former Supreme Court clerks — Samuel clerked for the late Justice Antonin Scalia and Epps and Litman clerked for Kennedy. They also are close friends and very much enjoy talking about the law with one another.

The hosts prepare for the show by reading the briefs, transcripts of the arguments and opinions, all while cutting and pasting to a shared document the things they find interesting and amusing.

When it comes time to record, they will do a quick vocal warm-up and then turn on the microphones.

What follows is typically an overview of the cases and arguments laced with their own opinions and perspectives gained by their time on the court and sprinkled with music and clips from the court proceedings.

Samuel also noted a less-scholarly way to prepare for the recording session: “A glass of wine before a podcast never hurt anybody.”

Volokh, who listens to First Mondays while sitting in traffic, described the podcast as being an “essential resource” to learn about the court.

More than entertaining, Volokh said, the co-hosts are doing what every academic should do: public service. College professors have to teach and do scholarship, but they also need to offer something outside of the academy, he said. First Mondays serves the public by explaining the profession and the law.

Initially Epps was a little nervous about doing a podcast when Samuel first approached him. He was hesitant to offer their “unfiltered thoughts” to the public about the Supreme Court and the cases.

But Epps also understood that “milquetoast, hesitant observations” about the oral arguments would not attract listeners, so the pair had to mix in their opinions and perspectives.

Without any conscious planning, Samuel and Epps just happened to start the podcast during a period of great political divide that is causing the public to view the Supreme Court as a partisan instrument.

Epps called it a “very dangerous time” for the court, noting the justices really have no method to force Congress or society as a whole to follow their judgments. He is not certain what would happen if the court and its decisions were not treated with respect.

Samuel is concerned the court will move to invalidating the people’s will and not allow Congress to pass the programs and initiatives the people want. As an example, he pointed to Shelby County v. Holder, 570 U.S. 2 (2013) which overturned a section of the Voting Rights Act of 1965 that had long gotten strong bipartisan support.

Samuel’s remedy for creating a less-ideological court is to add members, then create some term limits so every president gets a guaranteed number of appointments.

“I think we have let the court take too large of a role in American life and we have assigned too many controversial decisions to them,” Samuel said. “I think the Supreme Court is at its best when it is farthest from politics.”

Andrew Hamm, blog manager at SCOTUSblog, said the podcast is enabling listeners to understand the court. Being former law clerks, Samuel and Epps can lift the veil a little bit on an institution that is not normally transparent. They keep a casual tone as they work through the questions and issues, which keeps listeners engaged.

“It seems clear that they’re friends and that these are the kinds of conversations they are having on their own,” Hamm said.

The magic of technology allows Samuel, Epps and Litman to remain at their respective universities and join each other by Skype when they record a podcast. Now in season three, the podcast drops a new show every Monday morning.

The show is about the Supreme Court, the arguments and the opinions, or, as Litman characterized it, “legal nerds” talking amongst themselves about the law. Nevertheless, much to the surprise of the co-hosts, the podcast has become popular, even attracting large audiences whenever the podcasters do a live show.