Directed by Damien Chazelle, who won an Oscar last year for his direction of “La La Land,” “First Man” is a brilliant film recreating a time that should not be forgotten. It follows the adventures of Neil Armstrong from 1961 to his landing on the moon in 1969, and it recreates a period where the NASA program captured the attention of our country as it was dragged through the trauma of the Vietnam War along with the assassinations of President John Kennedy, Bobby Kennedy and the Rev. Martin Luther King, Jr. 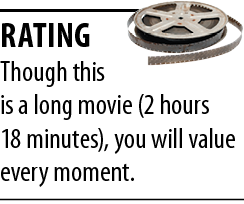 As expected, Ryan Gosling gives a tremendous performance as the dedicated, laconic Neil Armstrong. He was a man of little emotion, and nobody captures that better than Gosling.

I saw this film at the IMAX Museum in downtown Indianapolis, and I recommend that you find a way to see it on the big screen. The film puts you in various space capsules along with Armstrong and his colleagues, and director Chazelle does a marvelous job recreating the experience.

What made these astronauts so legendary was the fact that death was always dancing on their front door. One of the most emotional moments in the film involves the death of Armstrong’s young daughter as a result of cancer, and you will nearly cry as hard as he did as he rushed to a private room during the gathering after her funeral. Furthermore, put aside the criticism of this film for failing to show Armstrong planting an American flag on the moon and watch what he released into a large crater in the name of his daughter. Those moments alone will make you treasure the memory of Neil Armstrong.

However, the sacrifices of the Apollo astronauts stunned America with the death of Gus Grissom and his two colleagues when fire consumed their test capsule. While Shea Whigham is quite good in a small role as Grissom, Jason Clarke gives a splendid performance as Edward White, one of Grissom’s companions who died in the explosion. White was a close friend of Armstrong’s, and his wife Pat (Olivia Hamilton) was the first person Janet Armstrong (Claire Foy, more later) met when the family moved to Houston. After White’s death, wait until you see the interaction of these two women as Mrs. White stood stone-faced as she stared into the distance behind the open trunk of her car.

But while there were a lot of other wonderful performances from Pablo Schreiber as Jim Lovell, Kyle Chandler as Deke Slayton, Ciarán Hinds as Bob Gilruth, Ethan Embry as Pete Conrad, Corey Stoll as Buzz Aldrin, Christopher Abbott as Dave Scott, Cory Michael Smith as Roger Chaffee and Lukas Haas as Mike Collins, it was Claire Foy who elevates this film from good to great. Unforgettable in her Emmy-winning performance in “The Crown,” here she is a powerful woman trying to raise two boys as she watches her husband leave each day with the thought that she may never see him again. She reveals the strength that characterizes an average American woman, and I cannot wait to see her playing Lisbeth Salander in the forthcoming “The Girl in the Spider’s Web.”

Ironically, no one was more delighted with Armstrong landing on the moon than Edward Kennedy, who drove off the Chappaquiddick Bridge on the same day. But millions of people around the world watched in awe as Armstrong took “One small step for man, one giant leap for mankind.” It makes you wish that our government would start aggressively refunding the NASA program so that we could again pursue our adventure into outer space. 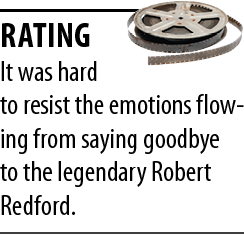 Based on a true story, here Redford plays Forrest Tucker, a veteran bank robber who has escaped from numerous prisons across our country. You soon discover that while many aging men look to play golf in their free time, Tucker wants to do nothing more than cross our country and rob any available bank. He does so with two other aging gentlemen known as the “Over the Hill Gang”. Danny Glover, 72, and Tom Waits, 68, play his two conspirators, and they add both charm and humor to the film.

While Tucker has a reputation as being a friendly, affable robber, his personal life is a complete mess. Separated from his wife and family when he was in prison at a young age, he never bothered to contact them again after he obtained his freedom. Redford’s Tucker is a lonely, affable gentlemen who chooses to define himself by doing his best to charm his robbery victims.

Nonetheless, the strength of the film flows from the performances of Sissy Spacek and Casey Affleck. Spacek plays a widow who lives on a farm she can barely afford with three horses, and she develops an arm’s-length relationship with Redford that warms the entire film. When Redford tells her on her home porch that he has never ridden a horse, he adds that it is on his to-do list. Spacek, drinking some tea, looks at her aging friend and cryptically responds, “I’d get on that pretty quick if I was you!” As seen in “The Straight Story” (1999), she is a 68-year-old actress who adds grace to small films.

Affleck comes off his Oscar-winning performance in “Manchester By the Sea” with a performance as detective John Hunt, who becomes fascinated with Tucker as he pursues him. While he clearly knows that sooner or later Tucker will have to return to jail, he can’t help but hold a bit of admiration for this aging rogue.

As the lights came on in the theater as the movie ended, I looked around at a crowd of approximately 25 people. While I am 71, I started laughing as I concluded that I was the youngest person in the theater! Keep that in mind, as a subtitle of the movie could very well be “Old Man & the Gun: Watched by a Bunch of Old Men in the Theater!”•

Robert Hammerle practices criminal law in Indianapolis. When he is not in the courtroom or the office, Bob can likely be found at one of his favorite movie theaters watching and preparing to review the latest films. To read more of his reviews, visit www.bigmouthbobs.com. Opinions expressed are those of the author.