Home » IndyBar: Real Friends, Ellen DeGeneres and Those Who Tell You Like It Really Is

Real friends tell it to you like it really is. They tell you the truth, even if you don’t want to hear it.

As I sat in the Supreme Court of Indiana two weeks ago at the IndyBar’s third-annual Memorial Service, I got to thinking about one of my real friends who we had recently lost. He was my “little brother” James and he had always given it to me straight.

On paper, with the exception of our first names, James and I weren’t very much alike. He was 16 years younger than me, he was African-American and he lived in public housing. He didn’t know who his father was and he was being raised by a 75-year-old saint named “Aunt Jean.” If you know anything about my background, I won’t have to go through this paragraph to point out how I didn’t start off with the same challenges as James did.

In the fall of 2015, after watching me celebrate an Alabama touchdown, James sat me down, looked at me from under the bill of an Ohio State ball cap and gave me an unwelcomed revelation. He told me I “danced like Ellen.”

Ellen. As in, Ellen DeGeneres. As in, the talk show host and the voice of Dory, the forgetful Pixar fish. THAT Ellen.

And at first, I didn’t want to accept this as true, but when I looked over at my wife Anne and she gave me a reluctant nod, I knew that it was. And don’t get me wrong, I admire Ellen. She’s funny and talented and stands for things that are so much bigger than a talk show, but still, James’ comment was far from a compliment for a man in his 40s. 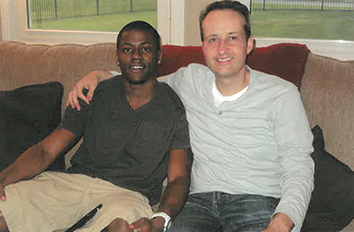 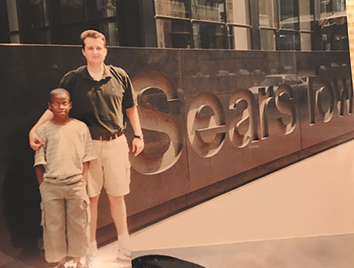 Because of our different backgrounds, James had a lot to point out to me and in 2016, the last year of his life, as he became more dissatisfied with the world, he rarely shied away when it came to sharing an opinion with me about wealth disparity, or luck, or a lack of luck, or the fact that he thought he was funnier than me. With the exception of the Ellen comment, I never really took offense to any of his comments because I often thought he had a point. Besides, who was I to tell him he was wrong?

The last comment James ever made to me was “I love you.” He said it in a text message to Anne and me. It was early December 2016 and I was at the IndyBar Board of Directors Dinner when I received the text. At the time, I was confused by what seemed to be a very out of place message, so I left the room where we were having dinner a few times to call James, but I only got his voicemail. Of course, in hindsight, the message and the finality of it made sense. The last few years had been tough on James and later on in the night, when James’ brother Jordan answered the phone instead of James, I suddenly didn’t need an explanation of what had happened.

The next few days were of course, filled with lots of sadness. During this period, I remember feeling tired, but when I slept, I would constantly wake up because for the first time in my life, I was having nightmares about things that had really happened. I was filled with confusion and had lots of questions, but the answers I received seemed to make me more confused and, at times, even angry.

But if there was a bright side to all of this, there were a few nice things I received in this period, like hugs and invitations to grab a beer. And for the first time in a while, I accepted those invitations. I sat across from friends with only a pint of Guinness between us and I told whoever would listen everything that was on my mind.

And I received phone calls (not texts) from friends and I would pick up the phone and chat. When I would get home, my mailbox would be full. And not my electronic mailbox. My real mailbox. The one at the end of my driveway and it was full of real, personal mail, made with real folded paper and handwriting. People sent their condolences, their thoughts, their prayers. It was comforting.

Not including family, the people who comforted me the most during this period of time were lawyers. While that may come as a surprise to some, it won’t surprise anyone who has worked in this profession. Lawyers take care of and serve others for a living and they aren’t afraid to reach out to someone when there’s a problem. Lawyers have compassion and empathy for others; they have the ability to listen and observe and they know how to say the right thing at the right moment. In December 2016, the outpouring of support I received from IndyBar members was constant and kind and this support renewed my faith in the hearts of many of those in the legal profession.

In my first year as an attorney, the late Judge Larry McKinney of the U.S. District Court for the Southern District of Indiana made the case to a group of young lawyers at a required seminar that “lawyers are the good guys.” I couldn’t agree more. If you are ever at a party and someone asks you what you do for a living and they try to joke that you are somehow evil, crooked or mean for being an attorney, please have them call me at (317) 915-5882 so I can tell them how wrong they are.

There are many things in this life we have to accept even if we don’t want to. For example, I apparently have to accept the fact that I dance like Ellen. I have seen a doctor about this condition and she said if we had caught it earlier, she might have been able to do something about it, but it’s simply too late now.

And, of course, I have to accept the fact that James is no longer with us anymore. Anne and I don’t like living in a world without him, but if we have to do it, then I’m forever grateful that the last thing he told us was that he loved us. I am also forever grateful for the support I received from members of the IndyBar in December 2016. As people who take on other people’s problems for a living, I can attest to the fact that these lawyers were skilled in the art of “having my back”-ness, and their skills and compassion shone through just when I needed them.•