A humbled Judge James R. Sweeney II was touched by the kind words and sentiments of those who honored him Friday afternoon at his public investiture ceremony as the first judge to be confirmed to the Southern District Court of Indiana since 2010. 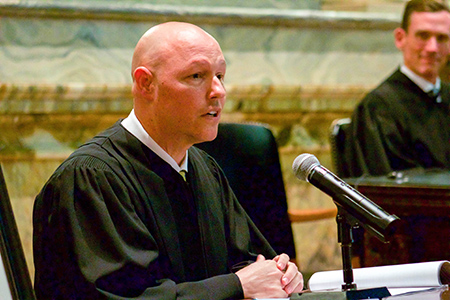 James R. Sweeney II talks to those who attended his investiture Friday in the District Court for the Southern District of Indiana. (IL Photo/Katie Stancombe)

Before addressing the jovial crowd, Sweeney took a lighthearted opportunity to take his first-ever selfie with his benchmates, drawing laughter from the nearly 400 people gathered to celebrate.

Individuals with personal ties to the new judge traveled from across the world to attend the ceremony, including family, friends, colleagues, former clients, classmates, shipmates, squadron mates — even his first crush and third-grade teacher, Miss Stevens. Sweeney said he wanted to thank everyone individually, but he couldn’t as there wasn’t enough time to address them all. Instead, he passed out dozens of bouquets of flowers to show his appreciation.

“Let me say how honored I am that any of you would make your way to the courthouse for such an occasion as this,” he said. “I’m humbled to stand before you today. I’ve learned from and leaned on each of you in some way and I appreciate that.”

Additional recognition was given to the veterans in the room as Sweeney and others celebrated the 243rd birthday of the United States Marine Corps with the posting of the colors by the U.S. Marine Corps color guard and the ceremonial cutting of the cake with swords.

Sweeney never spoke of himself during his time at the podium, but rather thanked those who made the event possible, as well as all who played a role in his life and successes.

Sweeney was praised for his selflessness, kindness, determination and patriotism as a devoted Marine Corps veteran. Republican Indiana Senator Todd Young said Sweeney made the arduous process of selecting a nominee for the open position incredibly easy.

“His integrity and character are unimpeachable, he’s a model of collegiality and professionalism and character,” Young said. “Simply put, he possesses all of the necessary qualities to be a great judge for our community, and that’s why I recommended him. That’s why I am proud of Colonel Sweeney.”

Similarly, Chief Judge Jane Magnus-Stinson, senior judges Sarah Evans Barker and William Lawrence and district judges Richard Young, Tanya Walton Pratt, and James Hanlon all offered Sweeney words of encouragement and advice. Specifically, Lawrence made sure to inform the new judge that he should avoid rolling over his robe with the wheels of his chair and to never underestimate the office morale boost of bringing in donuts.

Barker similarly joked over the extensive time it took to officially bring Sweeney into the role after her decision to take senior status four years ago.

“Frankly, I was beginning to wonder if it would ever come,” Barker said. “What took you so long Jim?”

On a more serious note, Sweeney said he hopes to live up to the standards his fellow judges have set for him and plans to roll up his sleeves and serve as a judge of patience, dignity, respect and courtesy.

“Everyone has been so welcoming, so professional, so patient, so kind. So eager to teach and offer advice and a helping hand. Thank you for your service, your patience and your friendship,” Sweeney said.

“Thank you so much for this robe, and this robing and privilege. For taking a chance on me when you had no idea what that chance would lead to.”

Sweeney said that as a federal judge, he’s already been noticed. After becoming a judge, he said he was summoned for jury duty for the first time in his life.