As bar exam passage rates continue to decline and a majority of states move to a Uniform Bar Examination, the Indiana Supreme Court is taking steps to determine if the Hoosier state should follow suit and change its gateway test for admission to the Indiana bar.

The court on Dec. 4 unanimously ordered the creation of a Study Commission on the Future of the Indiana Bar Examination, a 14-person commission comprised of jurists, attorneys and law school deans across the state. Together, the members of the commission are tasked with reviewing details of the Indiana bar exam to determine if any changes are necessary.

“In recent years, there have been significant changes in bar admissions,” Indiana Chief Justice Loretta Rush wrote in the Dec. 4 order. “… We find that these recent developments warrant an in-depth analysis of the Indiana bar examination to determine whether changes in the format or content of the examination should be made.”

That in-depth analysis will include a review of seven specific bar issues, including whether:

• Indiana’s passing score should be modified;

• Indiana should continue scaling the written portion of the exam to the multiple-choice portion;

• Indiana should continue to use the same grading scale for the written portion;

• The number of subjects on the Indiana exam should be changed;

• The appeals process should be changed;

• The content and format have a disparate impact on any groups, and;

• Indiana should adopt the UBE.

Led by retired Indiana Chief Justice Randall Shepard, the commission is charged with submitting a report with findings and recommendations to the Supreme Court in December 2019. Indiana Court of Appeals Chief Judge Nancy Vaidik, vice chair of the commission, said the group is comprised of attorneys who are diverse in their age, race and geographic locations, as well as attorneys who have taken both the old and new forms of the bar exams.

“That will be great input for us,” Vaidik said.

Considering the continued decline in the bar exam passage scores, commission members and legal education experts say the time is right for a court-sanctioned review of the situation in Indiana. In July 2018, 65 percent of all test-takers passed the Indiana exam, compared to 82 percent at the same time 10 years ago. In more recent years, 66 percent, 64 percent and 74 percent of all examinees passed in July 2017, 2016 and 2015, respectively.

Many have attributed the falling passing scores to a lower caliber of law students, and Vaidik said she expects the quality of students to be a topic of discussion. However, she also said the commission’s primary task is a thorough review to determine whether the exam itself is contributing to falling scores.

In the law schools, students are becoming more nervous about passing the bar exam as they see scores falling across the country, said Indiana University Robert H. McKinney School of Law Dean Andrew Klein. He, along with the deans of the IU Maurer School of Law and Notre Dame Law School, will serve on the commission.

One of the issues Klein plans to raise is whether the Indiana exam tests too many subjects. In addition to the multi-state bar exam, which tests seven topics, the Indiana exam also includes 11 topics related to Indiana law. That makes Indiana’s exam more challenging than other state exams, Klein said, a fact he plans to focus on during commission discussions.

“In Indiana, is it important for students to come to a two-day examination with 50 percent more subjects than any other state? Maybe yes, maybe no,” Klein said. “If the answer is no, then we get into the question of, ‘What do we want to test?’” 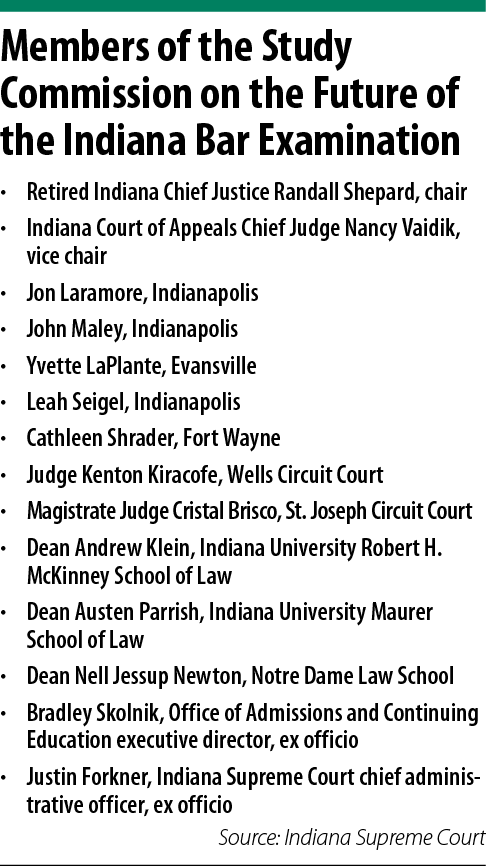 While Klein said he does not plan to advocate for or against the Uniform Bar Exam, which tests 12 topics, commission members agree that the possibility of adopting the UBE will be a major question for review. A 2017 study by an Indianapolis Bar Association task force recommended against Indiana adopting the UBE, citing to the fact that at the time, little research had been conducted into the impact of adopting the uniform test.

But now, 30 states have adopted the UBE, and John Maley, who serves on the court commission and led the IndyBar study, said there is likely more data available about the uniform test. Further, Maley said the court-created commission will likely have more access to that data than the IndyBar task force, which will enable the commission to make a well-reasoned recommendation about the UBE.

One of the concerns the IndyBar task force had about the UBE was the lack of independent research into whether the exam could have a disparate impact on any groups of test-takers. According to Maley, research has shown that across all standardized tests, differentials in format can lead to different results among different racial, socio-economic, ethnic and other groups.

As with the UBE, Maley said the court’s commission will likely have better access to data on whether the Indiana bar exam has a disparate impact on any groups. That data will enable the commission to see where changes in the Indiana bar’s format could close those gaps, he said.

Commission members will look to experts to help them sift through relevant data and other information during their review, Vaidik said. Shepard said the commission will likely bring in professionals who are engaged in the legal education field, representatives of national groups, statisticians and other similar experts. He also said the commission will ask Indiana’s Board of Law Examiners to provide relevant reading material. 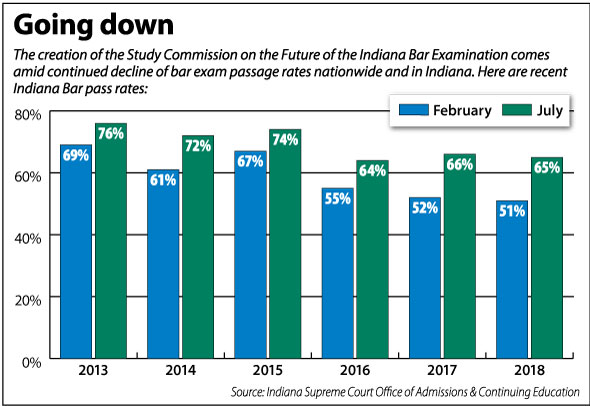 At the commission’s initial meetings, Shepard said members will discuss each of the seven enumerated topics to ensure all members understand the issues they are being asked to review. From there, commission members will begin engaging experts to provide answers to the questions the court presented, he said.

Then by the end of spring 2019, Shepard said he hopes the commission will be able to begin talking through the information they received from the experts, putting them in a position to begin formulating findings and recommendations by the end of summer. The final report is due Dec. 1, 2019.

Members of the commission agree that they are not coming into the review process with any pre-conceived notions about what their results might or should be, because doing so could give them tunnel vision.

“Everything’s on the table,” Vaidik said.

Ted Waggoner, a Rochester attorney who has chaired the Indiana State Bar Association’s Legal Education Conclave, said he hopes the commission is able to find the bar exam’s “sweet spot” — the place where potentially bad lawyers are kept out of the profession, and potentially good lawyers are allowed in. Commission members likewise agreed that their goal should be to make changes that ensure the bar exam accurately tests for lawyer competency.

Waggoner praised the court for creating the study commission, saying that in an evidence-based profession, judicial leaders should not make any changes to the profession’s gateway test without evidence to back them up. The issue should not be a matter of preference over multiple-choice versus written questions or in-state versus out-of-state grading, he said, but instead should be a matter of ensuring the best possible lawyers are made available to society.

“It won’t be perfect,” Waggoner said of his “sweet spot” ideal. “But if the goal is anything else, then you’re not playing fair.”•