There’s professional misconduct, and then there is felonious misconduct.

As happens every year, hundreds of grievances are filed against lawyers, and in a few dozen of those cases, attorneys are accused of straying so far from their professional oaths that their conduct warrants formal discipline against their ability to practice law.

The rare subset of these attorney discipline cases brought by the Indiana Supreme Court Disciplinary Commission are the result of criminal charges against lawyers that could result in jail time. In that regard, the Hoosier State had plenty.

Kenneth Shane Service, 45, already has spent some time behind bars for what he’s accused of doing while a practicing attorney — stealing hundreds of thousands of dollars from disabled clients’ trust funds. In October, Service was held without bond in Johnson County after a judge issued a warrant for his arrest.

The founder and former leader of Carmel-based National Foundation for Special Needs Integrity faces felony theft charges in Delaware, Franklin and Lawrence counties. He allegedly stole from special needs trusts established for clients in Muncie, Brookville and Bedford, and he faces trial dates next year in each of those counties.

Service’s initial criminal case in Lawrence County came to light in September 2017, when an Indiana State Police investigator warned of the possibility of “numerous victims in multiple states.” Service was suspended indefinitely from the practice of law because of that case. In the Indiana cases where Service is charged, he is accused of stealing more than $200,000 from clients’ special needs trusts.

Service has a pretrial hearing in Muncie in January, a trial date in February at the courthouse in Brookville and an April trial date in Bedford.

Schuyler, 65, is now serving eight years in the Pendleton Correctional Facility after he pleaded guilty to 15 felony counts related to the theft of at least $550,000 from six estates, including a bequest to an Anderson church. Schuyler previously had been suspended from the practice of law due to the accusations against him.

Like Service, Schuyler had been arrested on a warrant after he failed to appear for a court hearing regarding the estates he administered. The Supreme Court wrote in its disbarment order that when Schuyler did appear, he wrote a check to the church to make restitution. The check bounced, after which Schuyler was removed as administrator and criminally charged.

“An accounting done by the successor administrator revealed that (Schuyler) had made unauthorized payments from the estate to himself totaling approximately $164,000,” the court wrote in disbarring Schuyler. According to the DOC, Schuyler’s earliest possible release date is in June 2021.

Also in May, justices disbarred Mishawka attorney Fronse W. Smith, Jr., after he was convicted of felony intimidation for threatening to kill his wife with an ax.

Smith was on the phone with his estranged wife and threatened to “split (her) chest open with an axe” in May 2015, according to the court. The wife called 911, while Smith continued to threaten her via text message and drove to her home. Smith was attempting to enter the home when police arrived, at which point he told his wife, “Now you’ve really done it.” Police discovered an ax in Smith’s car, and he was arrested and charged with felony intimidation. Smith was convicted in November 2015 and was given a one-year suspended sentence. The Indiana Court of Appeals upheld the Level 6 felony conviction in October 2016. His law license had been suspended since December 2016.

The Indiana Supreme Court issued the fewest attorney discipline orders in five years in 2018, and one northern Indiana attorney who’s also facing possible jail time was responsible for about 8 percent of them.

Attorney Jill Holtzclaw of Decatur has four active suspension orders after five were issued against her in 2018. She faces nearly two years in prison after pleading guilty in Adams County court to charges of forgery and counterfeiting.

Holtzclaw admitted in December to signing a judge’s name to a phony order in a divorce case and sending emails to an expungement client’s widow in which Holtzclaw posed as a deputy prosecutor.

Adams County Sheriff’s Detective Lt. Gary Burkhart wrote in an affidavit of probable cause that he had been asked to look into a suspicious divorce decree and final order that appeared to bear the signature of Adams Circuit Judge Chad Kukelhan. The detective wrote that the order contained no cause number.

“In looking into this further it was discovered there is no way this document could have been signed by Judge Kukelhan without the cause number being attached,” Burkhart wrote of the divorce order. Kukelhan said he didn’t sign the order, and investigators also learned the judge wasn’t in the courthouse the day the order was purportedly signed.

Holtzclaw also pleaded guilty to sending bogus emails to the widow of a man who had hired her to expunge his criminal record. The emails Holtzclaw allegedly sent falsely claimed they were from Huntington County deputy prosecutor Jennifer Pyclik.

“Pyclik stated she did not send those emails,” Adams County Sheriff’s Sgt. Larry Butler concluded, nor had the prosecutor ever used the email address associated with the replies Holtzclaw provided to the widow.

Holtzclaw pleaded guilty to the forgery and counterfeiting charges earlier this month and will be sentenced Jan. 11. 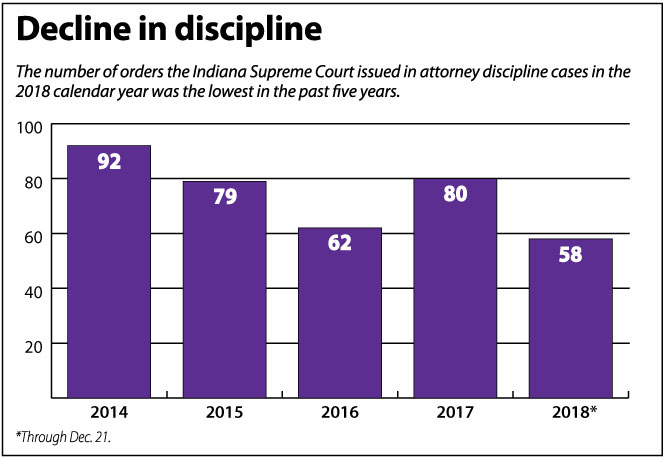 Here are some of the other major attorney discipline orders issued in 2018:

• Former Porter County deputy prosecutor Trista A. Hudson was suspended for 18 months in August for withholding evidence in a child molestation case after an alleged victim recanted and said he had been coached to lie. Hudson was fired in May 2017 for failing to reveal that one of two victims fabricated at least part of the accusations against defendant Eric Knowles. Hudson prosecuted a Class A felony count against Knowles in 2016 in which the Disciplinary Commission charged “there was no credible evidence.” Knowles was acquitted after being held without bail for three years.

• Marion attorney Tia R. Brewer was suspended in May, two months after she pleaded guilty to Level 6 felony possession of cocaine. In exchange for her plea, the state dismissed possession of marijuana and possession of paraphernalia charges also filed against her in May 2017. Brewer’s suspension was extended in November for three years for numerous counts of misconduct.

• In October, the high court accepted the resignation of Fort Wayne attorney Thomas W. Belleperche. The order accepting Belleperche’s resignation said he acknowledged there was a pending investigation or proceeding involving alleged misconduct that he could not defend himself against. While the order doesn’t specify the nature of the investigation, court records show Belleperche faced multiple felony counts of operating a vehicle while intoxicated filed in Allen County courts this year.

• Justices suspended Timothy E. Vojslavek of Valparaiso for noncooperation with the Disciplinary Commission’s investigation of a grievance against him in November after he failed to reply to a show-cause order. His suspension came one day after he was convicted in a bench trial of misdemeanor invasion of privacy for violating a protective order.

• Danville attorney Michael Jeffries, who committed 10 acts of misconduct including neglecting clients, advertising misleading information, mismanaging a trust account, lying and failing to cooperate with a disciplinary investigation, was suspended for three years in August.

• Greenwood attorney Joseph Patrick Hudspeth, who neglected clients and made false claims of his legal experience and expertise, was suspended for at least 18 months in April.•